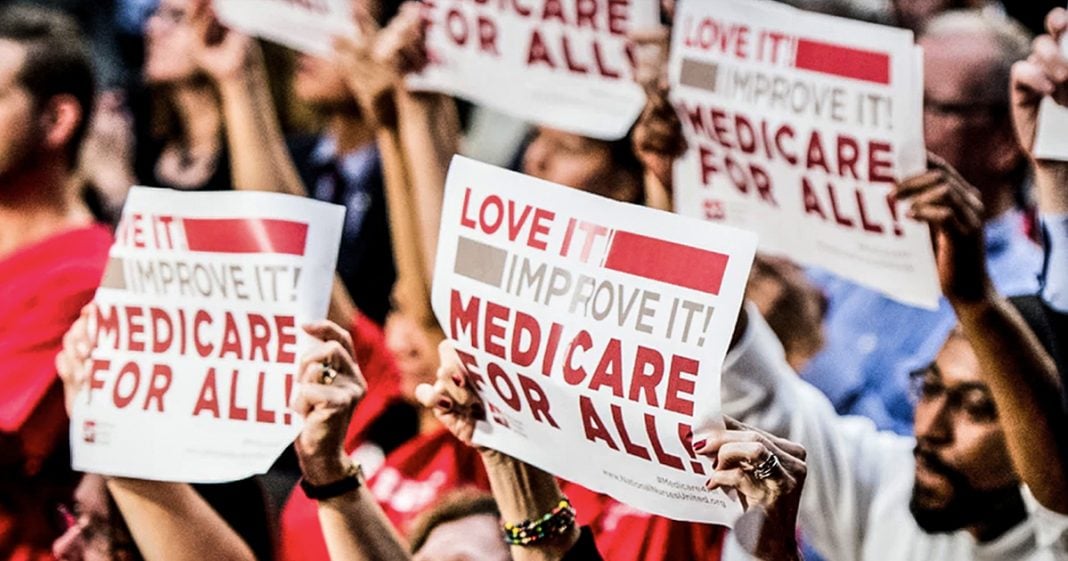 Republicans might want to tone down their attacks on Medicare for All because even their most ardent supporters think the idea of a government-run and funded healthcare plan is a good idea. Following a series of rallies in red states, the support for universal healthcare is increasing, even among those voters who believe that Socialism is the devil. Ring of Fire’s Farron Cousins explains why this is happening.

Republicans continue to tell us that Medicare for All socialized medicine, as they like to call it, would essentially be the death of the United States. This creeping socialism, as they say, is a disease upon the United States. Well, I hate to be the one to inform Republicans, but it appears that that creeping socialism disease is now actually starting to infect red states as well. Activists, specifically those working with national nurses United, have taken it upon themselves to go out and recruit activists in red states and hold rallies to educate people about Medicare for All Texas, Arizona, Louisiana, Idaho, Missouri, and South Carolina. These are all states where this grass roots, Medicare for All push is starting to take hold and none of those states could be considered liberal bastions of socialism. These are deep red states and yet when you get down to it and that’s what this nurse’s union is doing, when you start talking to people, when you connect with them and you put politics aside and you’re only talking about policy, they support this, they want this.

They understand that the private industry, in this case, the healthcare industry, the pharmaceutical industry and the insurance industry together, they have failed the American public. They routinely and repeatedly raised their prices for no particular reason other than they can. They charge us more money because they know there’s nothing we can do about it and people are sick of it. It doesn’t matter if you’re a republican or if you’re a democrat. We’re all getting hammered on this issue. Equally, they have been given every opportunity to change to fix it and they failed. All they’ve done actually is make it worse. There is only one logical step at this point and that is to have the government come in and expand their Medicare program, which has been hugely successful and has an overwhelmingly positive approval rating. Expand that to every citizen here in the United States. We’re already paying medicare taxes with every single paycheck that we, that we pay, we are, that’s part of your, your taxes, your federal taxes.

We’re paying in Medicaid tax. So what if instead of having to take some out of your federal, takes them out of your medicaid taxes, what if all of that just got lumped into one for a healthcare program to support every citizen here in the United States? We’re already paying for it folks. We may as well be the ones getting to use it as well. And yes, I know that wouldn’t cover the entire cost, but there are plenty of other plans out there that would raise that money. And in the long run it would save us a couple trillion dollars. This is a net winner by every possible measure. And yeah, we may have to pay a little bit more in taxes to help fund it, but if you’re like me and you’re already getting $300 taken out of every single paycheck for things like health insurance, FSA, money, dental insurance, vision insurance, yeah.

Paying a little bit more in taxes for a program that benefits myself, my family, and everyone else in this country rather than it going to a private corporation that’s going to screw me over at every possible turn. Yeah, I think I’m okay with that. I think I’m okay giving that money to a Medicare for All program and I think most Americans are as well, which is why Medicare for All has a nearly 80% approval rating in here in the United States. Again, I’ve said this before and I’m going to continue saying it at this point. Medicare for All is an inevitability. It is something that is going to happen here in the United States, but it’s up to us, the voters to determine how quickly it happens. We could start implementing this within the next four years, or we could screw around elect crappy politicians and push it 20 years down the road and how many people are going to die because they can’t afford healthcare coverage during that 20 years. And Are you as a citizen, as a fellow human being? Okay. With that number of deaths happening before you realize we’ve got to vote in good people to enact good policies.