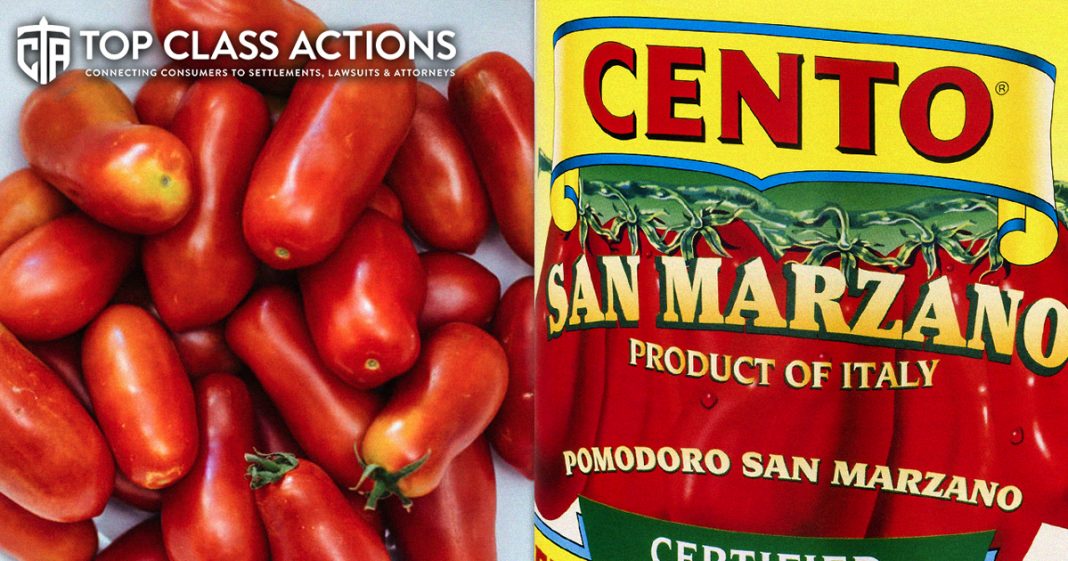 A class action lawsuit alleges that San Marzano tomatoes sold by Cento Fine Foods are misrepresented and are really less desirable tomatoes. Cento Fine Foods sells canned tomatoes from Italy labeled as “Certified San Marzano” tomatoes, but the tomatoes are not the type of tomatoes that consumers expect when they make their purchase. Allegedly, the San Marzano tomatoes used in many Italian tomato sauces are sought after by consumers for their meaty quality, low seed quantity, elongated shape, and low acidity. According to the Cento tomatoes class action lawsuit, Cento sells their certified San Marzano product for around twice the price of other tomatoes. Ring of Fire’s Farron Cousins discusses this with Scott Hardy from Top Class Actions.

Farron Cousins:                  When consumers buy a product they’re doing so thinking that what they’re looking at is going to be what they get. But things get a little tricky when you’re talking about certain food products, especially those that come in a can or if it’s a food product that you’re not exactly sure what it looks like. Joining me now to talk about a class action lawsuit that’s claiming a food maker is packing their cans with something not advertised on the label is Scott Hardy from topclassactions.com.

So Scott, this particular class actions against Cento Fine Foods and their San Marzano tomatoes, you know, seems kind of simple. It’s a canned tomato. You open the can, you’ve got your San Marzano tomatoes, but the lawsuit says that these are different tomatoes. These are actually Chinese tomatoes, which are a completely different subspecies. They don’t have the flavor they were looking for. It’s not the texture, it’s not the same acidity. Tell us what, what the class action itself is alleging in this particular lawsuit.

So we added their comments to the class action. You can see it and of course Cento Fine Foods have said this is a wrongful frivolous lawsuit. And they also state that their tomatoes are, are actually tracked. So you can look at which field on the hills of Mount Vesuvius, your San Marzano tomatoes were plucked from. And, you know, put into your, your can that we’ll be using, and my wife uses these tomatoes a lot for her delicious bolognese and you know, ziti and everything Italian goodness, my gosh, it’s so very tasty.

So Cento has said this is frivolous, but the class action has said is that the, literally the, the Mafia in Italy helps bring in these Chinese tomatoes and is selling them as San Marzano tomatoes and it’s a big profit center for the Italian mafia that still exist, ,allegedly, down there in Italy. And then you’ve got Cento saying no. I reached out to Cento personally and said, hey, I going to be talking with the, with the news media. Can you tell me point blank that there are no Chinese tomatoes within Cento’s San Marzano tomatoes? And I’ve heard crickets so far. So that’s concerning.

They sent out a very strongly worded statement saying how the, how this is completely false, but so far I would think it would be simple that they would send a reply back to me and say, hey Scott, no, no Chinese tomatoes in Cento Fine Foods’ Marzano’s. No, not, not, not there, but I haven’t gotten that yet. If we do get that statement, I will of course update the website.

Farron Cousins:                  Absolutely. And it is, you know, this like you pointed out, this is kind of a, a very weird story. I, I for one did not know there was an illegal, you know, counterfeit tomato racket running in Italy. But to me it seems like if Cento Foods is being 100% genuine, if these really are the San Marzano tomatoes, they should obviously have the documentation, you know, that they went to these fields that they picked these fields or that they even own these fields.

So this should be something that, that seems fairly easy for them to prove that they are not using an inferior product. So you know, maybe by the time this airs they’ve responded to you in the story has been updated. But if not, that is very concerning because again, there should be very easy documentation within the company. You know, emails, files, receipts, whatever it is.

But they should be able to unequivocally prove that these are the tomatoes they claim they are and rather than just let this lawsuit linger and, and build and grow and get more people to join in, they seems to me like we should be seeing some documents where they say, all right, hold up. Let’s put an end to this here. Here’s the receipt, here’s everything you need. Go Away. But so far we haven’t seen any of that, have we?

Scott Hardy:                          No, we haven’t. And it’s, it’s a simple question and I asked them, please tell me on the record that you know that you’re stating that there are no Chinese tomatoes in your San Marzano canned tomatoes. It should be, like you said, a very simple answer. Our tomatoes go off the mountains in the hills of Mount Vesuvius. They go into cans and they come to America where we enjoy them immensely.

So I’m hoping that I go ahead and get that, that, that official word from them because this, these are the tomatoes that my wife uses as we said, I’m like, come on. Let’s, let’s make sure there’s a little bit more, as we always talk about, truth in advertising and if they say they’re Italian, we want to have a little of Italian here, come on guys.

And so if you’re going to be paying a lot more money for these better tomatoes, give us the better tomatoes because if not, there are plenty of other cans of tomatoes on the grocery store shelves that somebody could grab instead. So that’s why consumers need to understand and they need to know. And the company has to be honest about what’s actually in those cans that they’re selling.

Farron Cousins:                  Absolutely. And if anybody wants to follow up, see if the company has responded to Scott’s request there you can follow the link in the description of this video. That piece will be updated as more information comes out about this, or if the company responds, and while you’re there, go ahead and sign up for Top Class Actions weekly newsletter. It is the best resource available for consumers to arm themselves with the knowledge that they need to navigate today’s world. Scott Hardy, topclassactions.com. I appreciate you talking with me today.