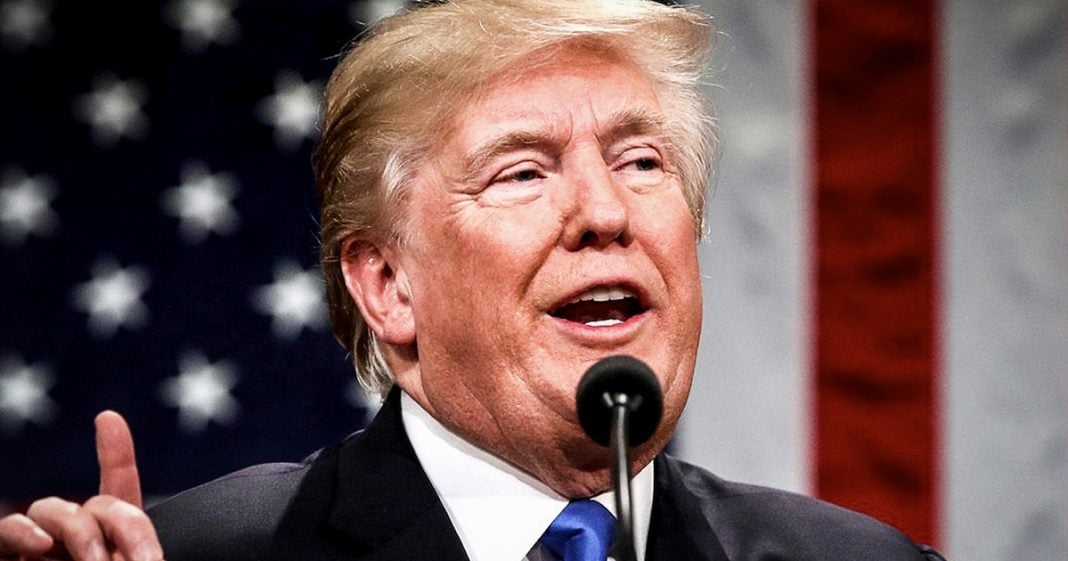 Donald Trump has released his 2020 budget, and it is even worse than most could have imagined. The budget is basically Paul Ryan’s dream come true, with cuts to social safety net programs, cuts to education and environment, and billions more for the military and Trump’s wall. This is a disgrace, and if it passes, this budget will lead to more suffering in the United States. Ring of Fire’s Farron Cousins discusses this.

Yesterday, we got Donald Trump’s four point $7 trillion federal budget for the year 2020 and as everyone expected, it’s awful, except we couldn’t have predicted just how awful it would be. This budget, and we’re going to get into the specifics in just a minute here, but this budget is the culmination of everything that Republicans have been trying to do in Washington DC for years. I mean there’s, it’s like he ripped it straight out of a Paul Ryan Ein rand dream. That’s how disgusting it is. It benefits the military industrial complex and it absolutely destroys American citizens by taking away billions upon billions, actually technically trillions of dollars from the social safety net programs that keep tens of millions of people in this country afloat. So here they are. Here are some of the biggest, most disgusting cuts that Donald Trump has in this republican budget. But you know what? Before I even get into that, let me, let me clarify that a little bit.

This is not just a Donald Trump budget. This is the Republican budget. I do not think we should label it as Donald Trump’s budget, because this is the same thing that any republican sitting in the White House would have done. They have all talked about cutting these programs that Trump has now cut. It’s just he gets to put his name on it because he’s president. Nothing would be different with another Republican in the Oval Office. Let’s make that clear. So here are the cuts. One point $5 trillion cuts to medicaid over the next 10 years, $845 billion in cuts to medicare over the next 10 years, 25 billion in cuts to social security over 10 years, 220 billion cuts to the snap food stamp program over the next 10 years. Uh, this program currently serves 45 million people, 21 billion cut to temporary assistance for needy families, $207 billion in cuts to the student loan program, which eliminates the public service loan forgiveness program that George W. Bush put in place.

And A, it cuts subsidized student loans, which are loans from the federal government that do not accrue interest. While you’re in school or if you’re going through financial hardship, those are going to be gone under this budget. Even though we have one point $5 trillion, I believe currently have accrued student loan debt here in the United States. Let’s make it worse. The budget says we’re increasing defense spending though by 34 billion up to $750 billion. He wants 8.6 billion for his stupid border wall and overall there’s a 9% cut to non defense programs, which is going to hit section eight housing vouchers, public housing programs, headstart, the women, infants and children nutrition program and low income home energy assistance program among many others according to Vox. Now did you hear anything in those cuts that is going to be bad for, I dunno say corporations? No, it’s all American citizens and and most of them have one thing in common.

They don’t have a ton of money. That’s what this is destroying people who are already struggling to get by tens of millions of American citizens are going to see their food stamps run out. They’re going to see Medicaid run out. So they can’t get insurance for their kids. Senior citizens on Medicare, oops, not going to have enough money for you. Social Security, we’re cutting that like Paul Ryan has always wanted to do, even though he’s not there anymore. His legacy lives on other cuts coming billions of dollars from the EPA for environmental protection. 500 million cut from NASA, which I don’t know how that’s gonna work out so well with the space force, but sure, let’s cut our space programs and that also build a space program. It doesn’t make any sense and 1 billion from the National Science Foundation because Republicans, eight science I, the list is essentially endless here of programs that we desperately need in the United States, but they’re getting cut because Republicans suck at budgeting.

This budget is cruel. This budget is inhumane and it’s absolutely never going to pass. That’s the important part. Donald Trump, what he’s done here is he set up another government shutdown because Democrats, I I hope are not going to vote for this. They’ll never pass this. So yes, that would lead to a, another government shutdown at which point concessions will be made in. Some of these programs will end up being cut or else the government’s gonna remain shut down until inauguration day of 2021 democrats are going to cave on some of these issues and we have to be prepared for that. But before that happens, we damn sure better fight and make sure that they don’t cave on things that are important. All of these are important and we need to push them as hard as possible to remain strong, but republicans unlikely to give an inch on any of these issues. There is a major budget showdown headed towards Washington DC, and at this point, it’s the people who care about other human beings versus the ones who had just assumed watch poor people die because they don’t give a damn. Those are the two sides in this budget battle. Make sure you’re on the right one.