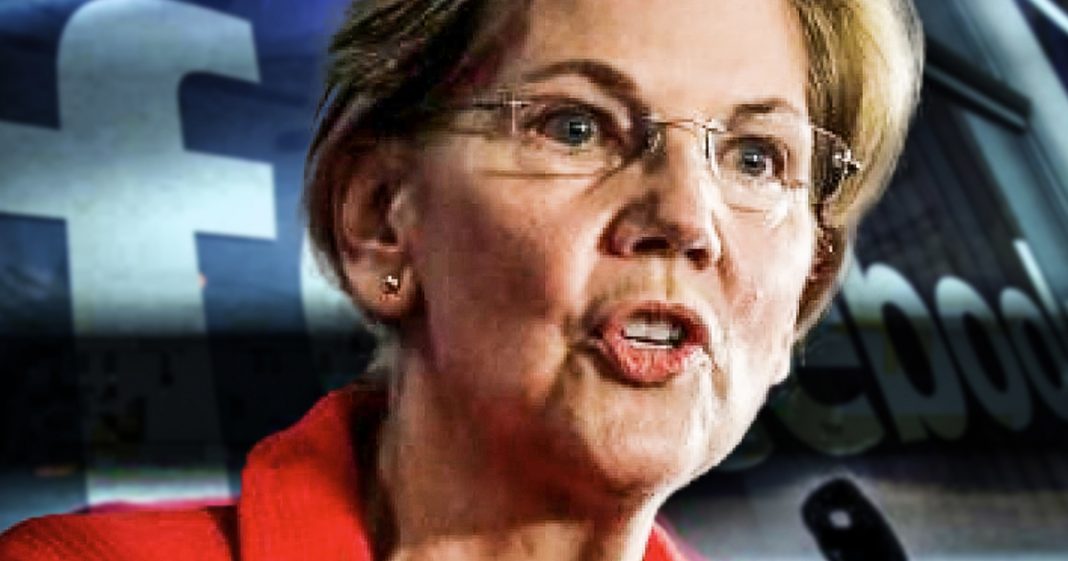 Facebook admitted that they removed ads placed on their site by Senator Elizabeth Warren’s campaign because the ads contained the Facebook logo, which they claim is a violation of their terms of service. But there’s more to it than that – the ads were about Warren’s proposal to break up the big tech giants, like Facebook, because they are abusing their power. Warren’s proposal addresses a serious need in this country, as Ring of Fire’s Farron Cousins explains.

Yesterday. It was reported that ads placed on Facebook by Senator Elizabeth Warren’s presidential campaign had been taken down by Facebook because they allegedly violated their terms of service for advertisements. These ads actually contained a logo for Facebook and Facebook says, you can’t put our logo in any of your ads, but the real issue that Facebook ad was ad these ads were promoting Elizabeth Warren’s plan to break up the big tech giants like Facebook, Google, and Amazon, and Facebook didn’t like that. So Facebook took the ads down and thought everything was going to be cool until of course, people noticed that. They took the ads down and reporters picked it up, at which point Facebook came out and said, oops, yeah, we didn’t want to do this. We just, you know, there was our logo in there and that’s against our rules, but we’ll put the ads back.

Don’t worry, we’re going to allow this because we want to allow robust debate. How kind of Facebook, right? They want to allow robust debate. They’re allowing us to debate, thank you mighty Facebook for giving us this valuable debate. Now, what you’re really doing is saying, oops, we got caught. We didn’t think anybody was going to notice, and now we got to backtrack, which really only proves Elizabeth Warren’s point to begin with. Breaking up these tech giants is 100% necessary and is Warren’s pointed out, it’s not just Facebook, although Facebook is now buying up other apps, you know, whats app and a Instagram, which are completely different from what Facebook is. Facebook is also a major advertiser. They’re an online job poster. Hell, they’re, they’re trying to become a media company. You cannot be all of these things in. That is what Elizabeth Warren is telling us. Same thing with Amazon because not only is Amazon, you know they’ve, they’ve got their media company, they’re basically a giant online Walmart as well.

And of course they’re also a major defense contractor who’s right now fighting for a $10 billion cloud computing contract from the Pentagon. In fact, more than half of Amazon’s money, by the way, comes from government contracts, not from you buying shoe laces on their website or subscribing to their video streaming service. That’s what Amazon is. But they want to be all of it and think that that’s okay. Elizabeth Warren is correct and saying, no, it’s not. You’re going to be one thing and you’re going to be one thing only. These companies grew too big, too fast, and especially in the case of Facebook that has been sued for damn near everything they have done. They didn’t know how to handle it. They didn’t know what they were, didn’t know what they wanted to become. They just knew they wanted to make a lot of money and they did it at our expense by selling our data, by illegally tracking us by violating rules with job postings and advertisements. Yeah, they need to be broken up, not just because they’re massive and they’re gobbling everybody else up, but also because they don’t know what the hell they’re doing and they keep running afoul of the law. Elizabeth Warren is right on this issue and Facebook isn’t happy about it. That should tell us everything we need to know about which side is right and which side is pure evil.