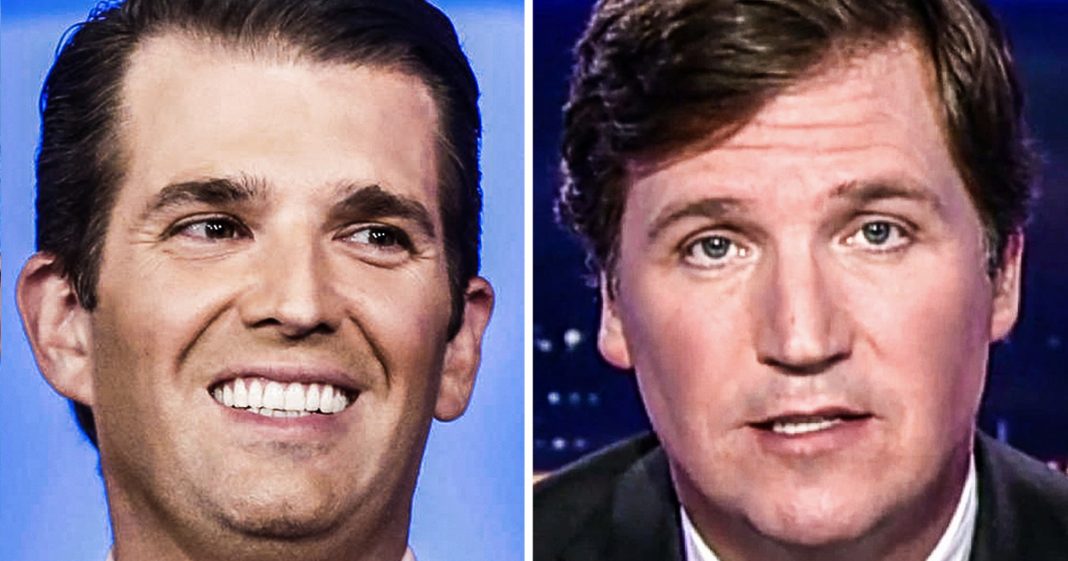 Donald Trump, Jr. has rushed in to defend Tucker Carlson after Media Matters exposed his disgusting history of misogynistic and derogatory comments. But Junior should have held his tongue, at least for a little bit, as more and more recordings are being released showing that Carlson is just a vile person who appears to hate everyone and everything that isn’t a straight white man. Ring of Fire’s Farron Cousins discusses this.

Yesterday, media matters released even more horrendous tapes from Tucker Carlson’s past, uh, this time where he was talking about how horrible all of the human beings are over there in the Middle East. A very dehumanizing comments, very racist comments. He also had some homophobic comments in there as well, but prior to these releases, uh, at least the second release after the first, but before the second Donald Trump Jr decided to rush in and come to Tucker Carlson’s defense. And this was obviously after Tucker Carlson said, no, I’m not going to apologize for statements I made a few years ago. And here is what Donald Trump Jr tweeted and support. This is how to handle the outrage mob. Remember, even the most sincere apology means nothing to them. They want to break in, ruined you. That’s their end goal. Later on, he issued a second tweet that said four comments made on the Bubba the love sponge show.

Obviously a serious policy show where no satire would be made. The left is not going after Tucker Carlson for any reason other than he’s effective at destroying their agenda. That’s what they do. Then of course after this defense, we had all these new tapes showing that Tucker Carlson really is one of the most disgusting human beings to ever step foot on this planet. Basically, what we’ve learned from these two releases so far at, I believe they actually have more, they’re coming out later, is that Tucker Carlson hates anyone and anything that is not a straight white man, that is Tucker Carlson. If you are not a straight white man, he does not like you. He views you as less of a human. That is what all of these comments amount to and Donald Trump Jr thinks that that’s okay. The less just trying to attack him because oh well he’s effective.

He’s effective at spreading hate. I’ll give you that. But beyond that, he’s pretty stupid when it comes to policy. Um, he’s not good at debating. He refuses to air interviews that have been recorded. If the person makes a better point than he does. So yeah, Tucker Carlson is only effective at one thing and it’s that one thing that we have a very real problem with. Let’s not forget that just a few months ago, Tucker Carlson suffered a massive advertiser hemorrhage after his Zena phobic comments about immigrants. I can only imagine how many advertisers he is going to lose as a result of these releases is specially if media matters has even more to come out. Donald Trump Jr jumped into this fight just a little too early because especially after the second release, there is absolutely zero defense of what Tucker calls and in his past. But here’s the thing. A lot of people say, well, it was in the past.

Why should we care about this? And the answer is you judge their past comments by their current actions and comments and you see that nothing’s changed with a guy like Tucker Carlson and that’s why this is important. This is a pattern of behavior that has been going on since at least 2006 when Tucker Carlson first gain national spotlight, he hasn’t changed. He is the same person today as he was when he made those awful comments on the radio. He should be removed from the air. He is not providing anything to the public discourse that is of value. And I hope, I sincerely hope that his advertisers understand that.