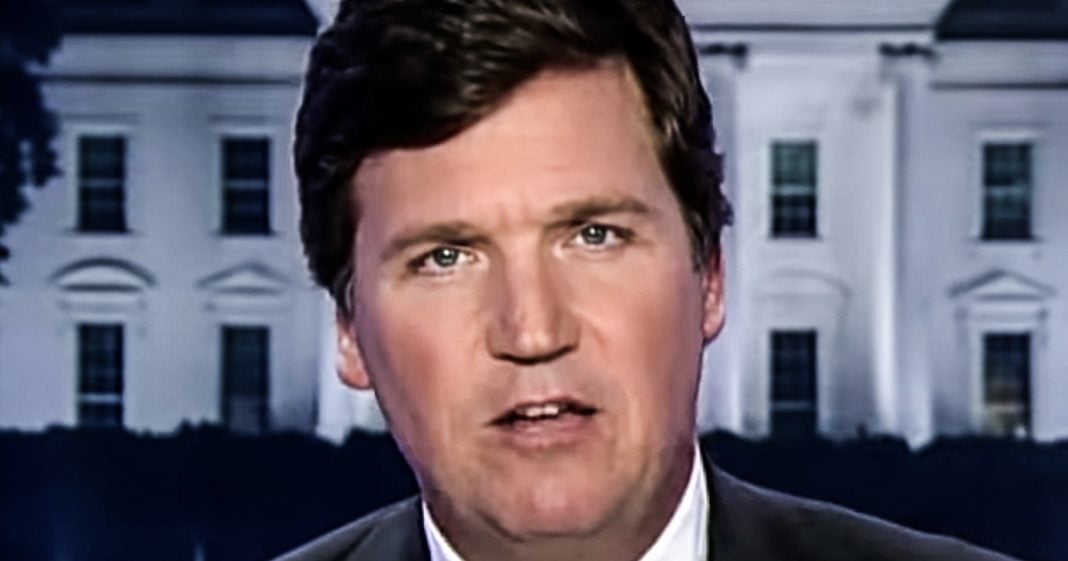 There are a lot of horrible human beings on the airwaves at Fox News, but recently uncovered audio of Tucker Carlson from 2006 to 2011 shows that he is, without a doubt, the worst person on the network. Media Matters for America uncovered the audio and posted it for the world to get a better understanding of how deranged Carlson really is. He defends assault on children, makes countless misogynistic claims, and shows he’s complete disregard for an entire gender. Ring of Fire’s Farron Cousins discusses this.

There’s a lot of really disgusting people on the air at Fox News. And for the longest time, Tucker Carlson was kind of duking it out between, you know, Jeanine Pirro, Sean Hannity, uh, Laura Ingram over who could be the most disgusting, but Tucker Carlson, thanks to media matters, has now taken the lead as the most disgusting human being to work at Fox News. See, media matters started combing through old radio interviews that Tucker Carlson would do. Basically he would call in to the, uh, Bubba, the love sponge radio program, but an hour a week where he would just go off essentially telling us how horrible women are, how good child rapists are, and just how dumb women can be and that they just need to shut up and stay in their place and do what they’re told. These interviews took place between 2006 and 2011. Uh, at the beginning when these, uh, clips surface during the 2006 time he was working for MSNBC starting in 2009, he started working for Fox News.

So two, three years of these were while he was working at Fox. The rest were while he was working at MSNBC. But nonetheless, Carlson made these comments. He defended a guy who was recently, or at the time recently arrested. He was on the FBI’s 10 most wanted list for arranging child marriages. Basically finding young women for old men to marry. I mean I’m talking early teens, illegal young women for older men to marry and Carlson defended it so there’s nothing wrong with it. Why not just do it? Here’s a brief selection from the sampling that media matters is put together so you can see for yourself just how Gross Carlson truly is here. It is not in prison for that.

He didn’t. Warren Jeffs didn’t marry under age girls. He’s in, he’s in prison for facilitation of child rape. These are weird and unpopular and he has a different lifestyle than other people find creepy. He’s an accessory to the rape of children. That is a felony and a serious one at that. What do you mean in accessory? He’s like got some weird religious call where he thinks it’s okay to, you know, marry underage girls, but he didn’t do it. Why wouldn’t the guy who actually did it, who had sex with an underage bro, he should be the one who’s doing life. The rapist in this case has made a lifelong commitment to women take care of the person. So he’s a little different. I mean, let’s be honest about it. It’s not accused of touching anybody. He is accused of facilitating the marriage between a 16 year old girl and a 27 year old man.

The accusations, that’s what they’re calling felony bullshit. Sorry. Now I’m just telling I’m to raise your marriage between the 16 year old and a 27 year old is not the same as telling a stranger off the street and rapier. That’s bullshit. In my brief experience, you don’t get swimming going is arguing with them. Really? Yeah. I’d never use it. It’s true. You debate politics with a woman and just go full blown out there. Especially feminism. If you’re talking to a feminist and she’s given you, well, you know men really need to be more sensitive and this, no, actually men don’t need to be more sensitive. You just need to be quiet and kind of do what you’re told and lighten up a little bit. But they love it too, where we run into her all the time. She seems like a cheesy, they’re very Contey. She seems extremely, I hear that word stepped over me. He seems why not? Go ahead. She just does seem a little cunty. Yeah, you said it. I’m just agreeing with you. I, I don’t use that word because I love for Tucker Carlson tonight on MSNBC I girl that comes across kind of contact, but she does, I mean I heard her, I mean, I know I’m a Brent Fan, so, okay. I’m gonna State My bias right out front here, but I heard her on with him and I just wanted to get for the spanking. She said that, and I’m going to end by just saying one thing because I don’t feel like the comments he just made need any more explanation.

They’re discussing in and of themselves and media matters says they actually have a lot more that are going to be coming out in the next few days. But here’s the thing. If you advertise on his show, if you appear on his show, even to argue with him and tell him he’s a horrible person, you’re still propping this up, boycotted the boycott, the advertisers boycott being a guest on it, but do whatever you have to do to make sure that everybody knows that if you support this show where the advertisers in any way even to argue with it, your propping up this kind of disgusting rhetoric from Tucker Carlson.