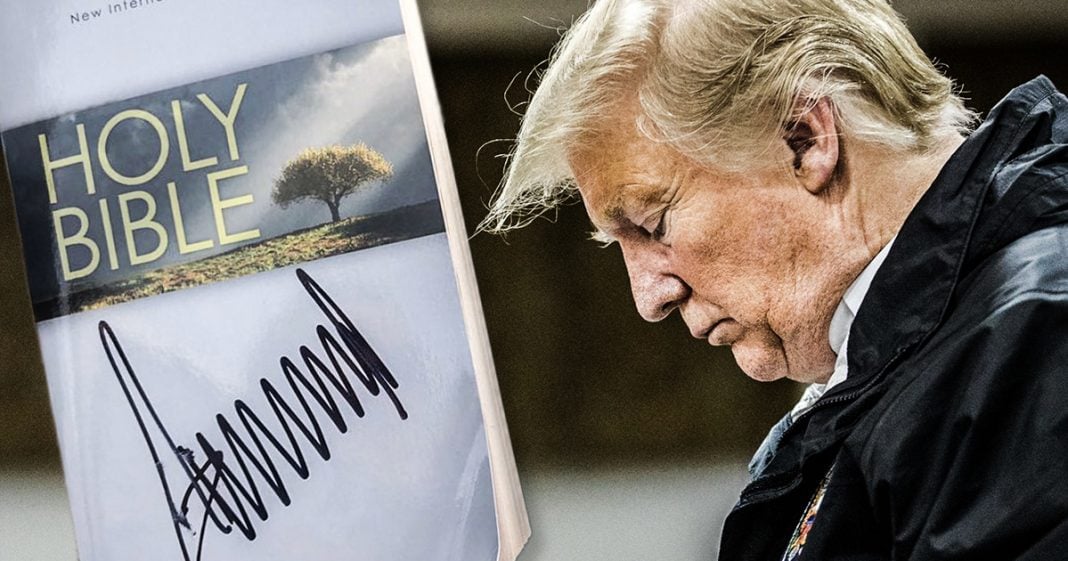 Donald Trump toured disaster areas in Alabama last Friday after a monster tornado destroyed a town and left more than 20 people dead. But the President didn’t waste too much time mourning those we had lost, as he then headed to a church where he signed bibles for phony religious Republicans. This is exactly the kind of thing that the bible warned us about, and this fake evangelicals don’t even realize it. Ring of Fire’s Farron Cousins discusses this.

On Friday of last week, Donald Trump headed to southeast Alabama, uh, to survey the damage that had happened in the state as a result of the massive tornado that came through earlier in the week that left 23 people dead. Uh, the, the victims here ranged in age from age six to 89, 23 people dead from this massive storm. So Donald Trump did what a president is supposed to do and he went and he toured the damaged area. He hugged some of the people that came up to him while he was surveying the area. He did a decent job there. Um, really no complaints about that at all. That’s what you’re supposed to do. Now. He feigned a little bit of humility and empathy, but it’s what happened after that. There really started to raise some eyebrows because after he toured the damage and hug those people, he went to a local church with Alabama governor Kay Ivy and then he began signing bibles.

The people in this congregation brought their bibles with them, walked up to Donald Trump and said, please sign my Bible. Now, according to a lot of Trump defending Christians online, this isn’t uncommon. We, we always see people asking to get their Bible sign, whether it’s, you know, from a pastor that they like a priest. You know, maybe they just had their Bible and they met somebody famous and that’s the only thing they had to sign. But it’s totally normal for people to go out there and sign bibles. And let me tell you, as somebody who was born and raised in the Catholic church, no longer a part of it, uh, but I’ve lived in the south my entire life. Um, I’m going to be honest and tell Ya. And again, I live in the Bible belt. Uh, not something I’d ever heard of happening. So for all of those defenders out there being like, no, no, no, no, totally calm and totally normal.

It’s really not. It’s not, I don’t care how you try to defend it, how you try to shape it. This isn’t normal. It’s not normal for a philandering, adulterer, pathological liar like Donald Trump to be asked to sign a Bible. That’s not normal. I think back to George W. Bush going down to New Orleans eventually for Katrina was he asked to sign bibles. I we covered that extensively and I never heard any reports of that whatsoever. Maybe we miss them that Obama ever go out and signed people’s bibles. Bill Clinton, Bush senior Reagan, I haven’t seen those reports. Not saying they don’t exist or that it didn’t happen, but I sure as hell haven’t seen them and I’m willing to bet most people have in either because I’m also willing to bet it didn’t happen. This is a cult. That’s what Donald Trump has created in the United States. That’s why these people were lining up to have this.

He then sign their bibles. They’re lucky they didn’t immediately burst into flames upon him touching them. But if you’ve ever actually read the Bible, read through it or even have a basic concept of what’s inside it, there is nothing in there that would support anything that Donald Trump has done for his entire life. He has never lived a day in his life according to a single page in that book. So to ask him to sign it is not only cult-like behavior, but it’s also a disgrace to everything that is written in that book that is supposed to be a guide telling people how to be better human beings. Something I think everyone who was present at that event may need to go and read for the first time or reread because obviously none of them got the message.