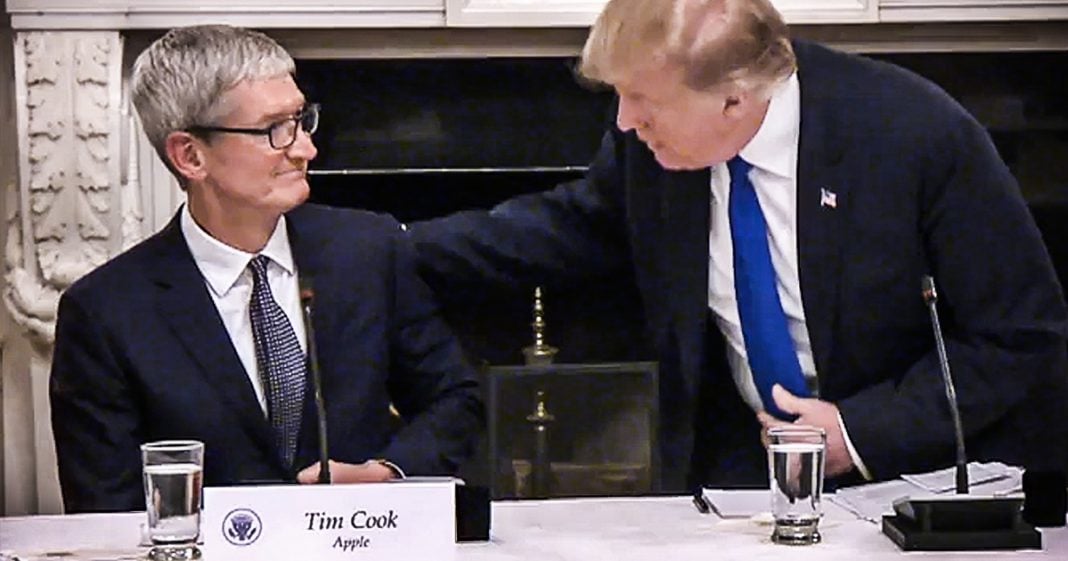 Republican donors gathered at Mar-a-Lago to meet with Donald Trump on Friday evening, and during their little meeting, they said that Trump told his “weirdest” lie ever. The lie was that he didn’t misspeak when he called Tim Cook “Tim Apple,” but that he actually said his last name, Cook, really really fast and it was hard to hear. Everyone knows this wasn’t true, but that didn’t stop the President from claiming otherwise. Ring of Fire’s Farron Cousins discusses this.

Donald Trump is a pathological liar. Donald Trump lies all the time. Donald Trump lies about things that don’t even matter, and in fact sometimes his lies about the thing actually keep the thing alive a lot longer than it should have been kept alive. And that’s the case we’re dealing with right now with his slip up last week where he called Tim Cook from Apple. Tim Apple in case you haven’t seen that or heard about it. Here’s the brief clip where he accidentally calls him Tim Apple, the beginning. They used to say, Tim, you got to start doing it over here and do you really have, I mean, you’ve really put a big investment in our country. We appreciate it very much. Tim Apple.

Okay, there you have it. Tim Apple. Okay. He slipped up. It happens to all of us and as much as I dislike Donald Trump, I am not going to fault him for accidentally referring to Tim Cook as Tim Apple until Friday evening when he met with a bunch of wealthy Republican donors down there at Mar a Lago. Any told them that he didn’t call him Tim Apple? He didn’t say that. He said Tim Cook Apple, he just said it really, really, really, really, really, really, really, fast and so you couldn’t hear the cook part. So in case you need it, here it is again and you tell me if you can even see his lips moving or maybe slow it down a bit and see if you can hear where he jimmied in that cook between Tim an apple. Here it is. One more time.

The beginning I used to say, Tim, you got to start doing it over here and do you really have, I mean you’ve really put a big investment in our country. We appreciate it very much. Tim Apple.

Okay, so at this point it’s obvious he said Tim Apple and in fact the wealthy donors that he was meaning with down there at Mar a Lago, they agreed. He said, Tim Apple, and they said that this lie to cover it up was quoting the weirdest lie they’ve ever heard him tell. The weirdest lie here is what one of the donors told Axios. He said, I just thought, why would you lie about that? It doesn’t even matter. And that’s the point. It’s not just the constant lies about the wall or immigration or foreign policy or tariffs or taxes or the economy. It’s all of the other lies that also our lives, but they don’t matter. Like you’re not going to gain any experience points from lying about mispronouncing someone’s name or calling them the wrong name. I get why you lie about everything else you think that’s going to help you politically.

But this one, this was just to save face so you don’t look like you accidentally made an error. You didn’t even make a complete ass of yourself. Tim Cook laughed it off, but you couldn’t even that you couldn’t handle anyone in this country believing that you made any kind of mistake ever. So you lied about it. You told a lie that everybody knows is a lie. We can see the video, we can verify this, but you’re so vain and vacuous that you decided to lie to these Republican donors and say, Nope, I didn’t say the thing that everybody in this country can verify that I said that ladies and gentlemen is a pathological liar. And that is just one of many reasons why this man is so dangerous for this country.