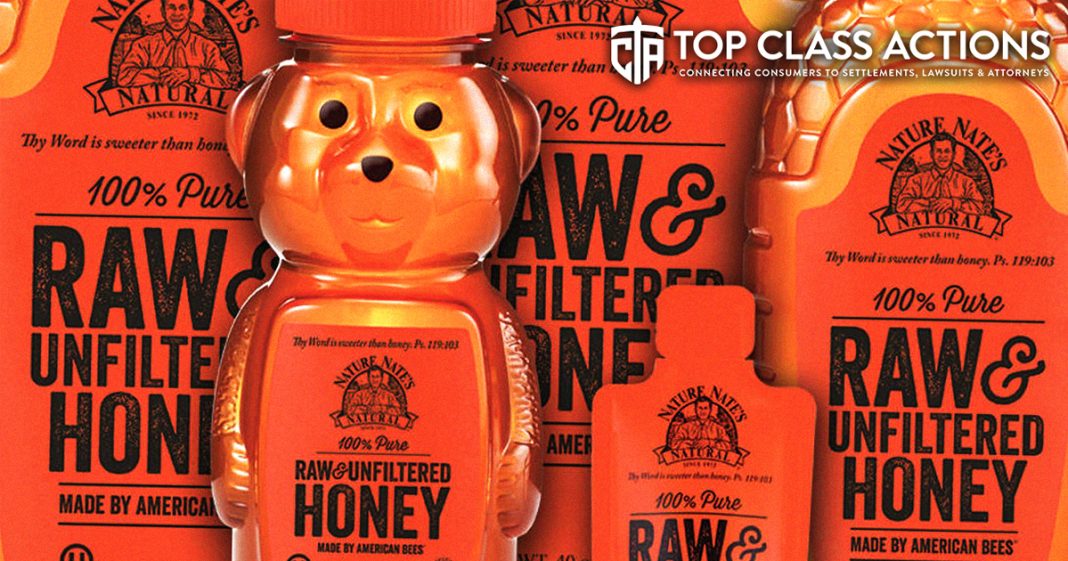 A recent class action lawsuit claims that Nature Nate’s 100% Pure Raw and Unfiltered Honey is not raw and is not 100 percent honey according to lab testing. The plaintiff says that on the Nature Nate’s website it states that: “We simply warm the honey so that it’s easier to deal with and pour into bottles. High heat is a no no. It kills all the good stuff.” Ring of Fire’s Farron Cousins discusses this with Scott Hardy from Top Class Actions.

Farron Cousins:                  Over the last few months. We’ve talked a lot here at Ring of Fire about products being mislabeled and consumers being duped into purchasing them. Well, here’s one that’s actually pretty interesting because this is one where we have a label that claims that the food product is raw, not cooked, it is a raw product. And yet we’re finding out now that no, the company is actually cooking it. And if you’re asking yourself how can that be?

Shouldn’t you be able to tell if a product is cooked or not? It’s a little more complex than that. And joining me to talk about the complexity here is Scott Hardy from topclassactions.com. Scott, obviously what I’m referring to here is Nature Nate’s 100% Pure Raw, that’s actually not raw. And consumers obviously if you’re looking at the container of honey, that’s not something you can look at and say, well no, this is obviously a cooked product.

So that’s where we get into this label issue and this is very interesting to me because yes, this isn’t something somebody can look at and say, no, I know the difference between a cooked honey and a raw honey, and raw honey obviously more expensive. Lay it out for us.

Scott Hardy:                          Yeah this, I consider myself a honey aficionado. So I drink a lot of tea and I use a lot of honey. It’s one of my strange addictions now. I just can’t help it. So I’ve been trying different honeys, which is why this one caught my attention once one of our great campaign and, I’m sorry, our community manager Nicole brought it, brought it up, is she’s also a honey aficionado. And so I was looking at this thinking Nature Nate’s, why would somebody be suing a honey manufacturer?

You know, we’re, there’s so many different little manufacturers going out there. I didn’t think they’d be worth going after frankly. But it turns out Nature Nate’s is actually a 40 plus year old company that has been putting out honey for a long time. And it’s not just American honey. Looks like from looking, they’re getting their, their honey from all over North America.

So looking at why this happened, they’re saying that you’re buying raw honey and if you’re trying to be healthy and make sure you’re really getting that straight natural product, you want raw, natural honey. But it has to be heated up at least a little bit typically to help pour it into jars and you know, make sure that it’s more manageable. And what the class action states is that Nature Nate’s heats there honey up to 120 degrees to make the bottling easier.

But to, to qualify as raw and unfiltered, it can’t be heated above 105 degrees. Because when you heat it, honey above 105 degrees, the class action alleges that the enzymes in the product reportedly break down. And so that might cause it to lose its priced characteristics according to the class action. So it’s a very small technicality, whether heating the honey to 105 degrees or 120 degrees, but that’s what this class action is going after. Stating that, no, you can’t go ahead and say this is raw honey, when in fact you’re heating it above a point where the honey and the enzymes are starting to break down.

Farron Cousins:                  And that’s a lot of the, the draw to these raw honeys, these raw products. You do pay a higher price for them because they’re supposed to be healthier for you. I mean there’s a lot of health benefits to honey. You know, even to a degree it has certain antibacterial products to it, you know, or properties to it, excuse me.

So when you heat it, even if it is just a little bit to help you be able to pour it better into a bottle, you do run the risk of losing those benefits and therefore those things, the extra goodness that consumers are paying for are no longer there. You’re not lowering the price to represent that this product no longer has as much of the good stuff as it would have. So consumers are getting duped, they believe what’s on the bottle, that this is raw.

It is unfiltered. It is, you know, basically fresh out of the beehive and ready to go. But they’re heating it to a temperature where it is officially cooked, the enzymes are breaking down, you’re losing some of the nutrients and that’s where they’re running into the problems here. And so, you know, to me this is a lot like a lot of the other issues we’ve talked about with the, you know, improper labeling on food products is that this, the slightest little tweak to a name of the product, you know, what they’re advertising could have prevented all of this.

But from the company side may have also slightly impacted sales a bit and almost every time from what we’ve seen from doing this for years, the company is going to go with the thing that’s gonna make them the most money in the, in the short term and not look at the long-term consequences. Which to me is kind of, you know what we’re seeing right here with this story.

Scott Hardy:                          Exactly. I mean, cause you can pay anywhere from $10 to $20 for a jar or a bottle of honey and you’re going to be paying, it could be upwards of twice as much for unprocessed honey as you would if for just, you know, regular a little honey bear that you would buy in the supermarket. And so Nature Nate’s knows that and that’s, as you mentioned, that’s why they’re going ahead and selling it as raw honey, even though it’s a slight variance in the temperature that they’re heating it up.

So I’ll be curious if we’re going to see Nature Nate’s go ahead and come out and change how they’re actually processing the honey as a whole. Maybe they will just heat up to 105 degrees and not up to 120 or, or what they’re going to do if they’re going to drop the raw label. I can’t see them doing that. They are a big, big honey manufacturer and but being, to try to drop the raw label and drop a line from their honey manufacturing, I don’t think it’s going to happen.

So I’ll be curious to see how Nature Nate’s come through and settles this class action. If, if they do, you know this is still pending, it might get thrown out, it might not get certified. And so to find the defense for Nature Nate’s will be a fun one to watch. If you’re litigation geek like I am.

Farron Cousins:                  Yeah. And you know, really instead of dropping the raw label, all they have to do just go over to the boiler and just turn that temperature down just a little bit and then they can still make the claim without losing any of the goodness of the honey. And I’m sure at even a hundred degrees honeys a little bit more malleable. You can probably get into a bottle just as easily. May, may, may run a little bit slower, but you’re still going to be able to get it in the bottle.

Scott Hardy from topclassactions.com appreciate you talking with me. And if anybody needs more information on this story, please do follow the link in the description of this video. Go to topclassactions.com and while you’re there, sign up for their weekly newsletter. It is loaded with information that consumers need to be aware of. Scott Hardy, Top Class Actions, thank you very much for talking with us.