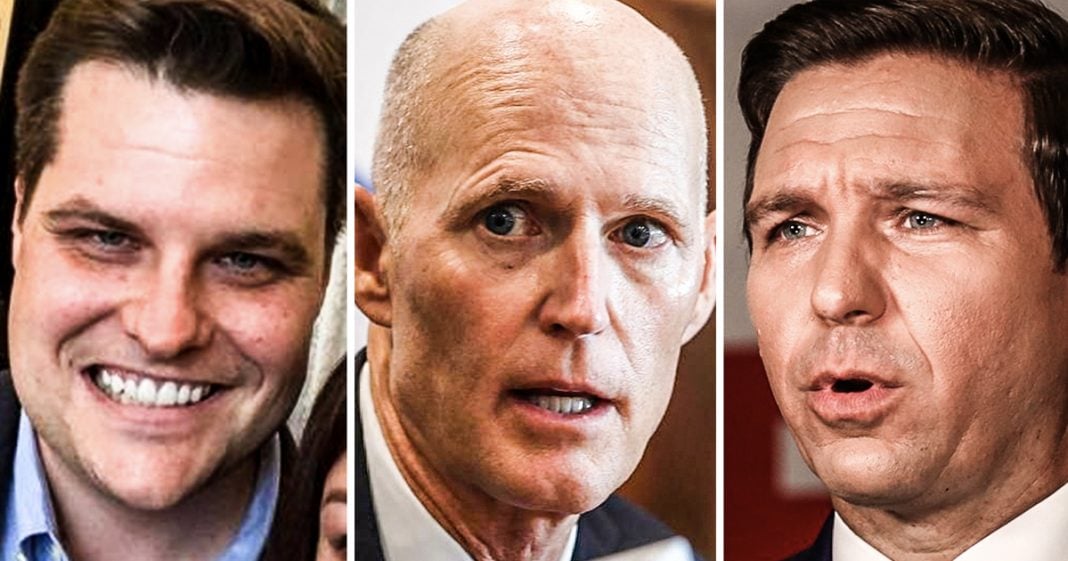 Li Yang, also known as Cindy Yang, is the former owner of a massage parlor chain that was recently busted for prostitution (the incident that roped in Patriots owner Robert Kraft) apparently has even more powerful ties than the owner of a football team. Donald Trump himself actually watched the Super Bowl with Yang, and many Florida politicians including Matt Gaetz, Rick Scott, Ron DeSantis, and even the Trump sons have photographs with this woman. Ring of Fire’s Farron Cousins explains what’s happening.

I’m sure by now most people have heard the story of the a Patriot’s owner, Robert Kraft recently, uh, being arrested for allegedly soliciting a young woman for sexual activities at a massage parlor in the state of Florida. Now, Kraft denies that he’s done anything wrong. Uh, he was actually caught in a sting that’s been happening in the state of Florida. They’ve been going around to a lot of these massage parlors, uh, monitoring them because they actually believe that they are a front for human trafficking. So they believe that these girls who people like Robert Kraft allegedly solicited, they believe authorities do that. Some of these women could have been trafficked into the United States to essentially become sex slaves. That’s why these places were under surveillance. The story is not about Robert Craft. The story is about a woman named Lee Yang, a Chinese woman who also goes by Cindy Yang, who also happens to be a major player apparently in the Republican Party.

Cindy Yang started founded these massage parlors that recently got busted that she had sold them a few years ago. So at the time they were busted, she did not own them. Her family instead now owns different massage parlors that have also been accused of basically bringing in women to perform sexual favors for them. Men who come in as clients. So she’s already established a pattern of behavior. So me personally, no, I do not believe that she didn’t know this was going on at those massage parlors. And then suddenly she starts her other massage parlors after selling those and they both get bus. No, no, no, no. This woman has exhibited a pattern of behavior. So if you want to ask me personally, I do believe that this likely happened under her watch while she was still in charge of those massage parlors. But again, even that’s not the biggest story here.

The biggest story is that Ms. Yang again is a major power player in republican politics, especially down here in the state of Florida. Because as we’ve learned in the last few days, not only has she been photographed with many high profile Republicans from our state, like my congressman Matt Gaetz, smiling happily with her in a photograph. Uh, our former governor slash new senator slash horrible human being, Rick Scott. Also in a photo with her, our brand new Republican governor Ron DeSantis. Also happy to be in a photo with her along with Eric Trump, Donald Trump jr and icing on the cake is that this woman watched the super bowl with Donald Trump. She was able to snap a selfie with the president and posted that on her Facebook page. In to that, this woman who wants to own the massage parlors that are suspected of being human trafficking parlors, she also runs a company now called a GYUS Investments.

They’ve got a website, it’s mostly in Chinese, but uh, they’ve been able to determine a researchers have that what she’s trying to do is sell access to Republicans at Mara Lago to her clients from China. The website talks about the fact that this is a great opportunity. I will hook you up, I will connect you, give me money and I will introduce you to these wealthy Republicans down here at Mar a lago, possibly even have the chance to Hob knob with Donald Trump himself. This is a big story. This is an important story. This is a story that the corporate media needs to start paying attention to and that we probably need some investigators working on because if this woman has not registered as a foreign lobbyist, then she could be looking at the same kind of trouble that many people in the Mueller probe are looking at because that is exactly what she’s doing.

Furthermore, all of the indictments from the massage parlor bus have not come down yet and according to the investigators there, there’s bigger names on these lists. Then Robert Kraft, the owner of the Patriots, and I can’t help but wonder is one of those names. Matt Gaetz is one of them. Rick Scott is one of them. Ron DeSantis, perhaps one of them is Eric Trump or Donald Trump jr or maybe even Donald Trump himself. We won’t know until the full list is revealed, but what’s also more disturbing is the fact that some of these women may have been brought into this country illegally and against their will for the expressed purpose of servicing powerful men. This is a bigger story. It deserves more attention and this is something that we’re going to be paying very close attention to as it continues to develop.