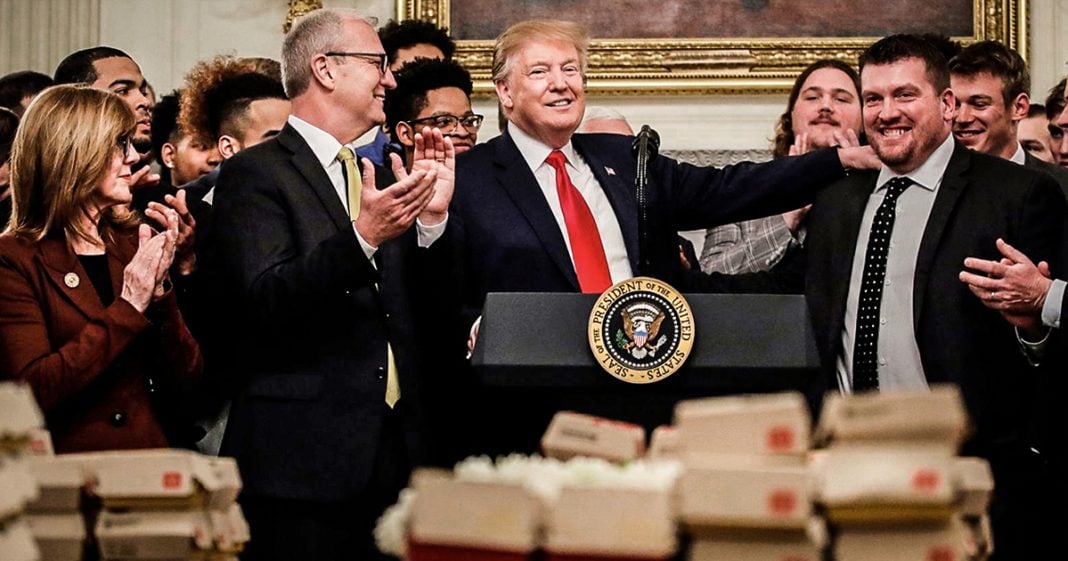 On Monday, Donald Trump welcomed the North Dakota State football team to the White House where he once again served these athletes a fast food hillbilly buffet. This time the food consisted of Big Macs and Chik Fil A sandwiches, and he didn’t have the convenience of a government shutdown to blame for his food choices. The players seemed fine, but the truth is that Trump is taking a once-in-a-lifetime opportunity for these students and dumbing it down to gross levels. Ring of Fire’s Farron Cousins discusses this.

On Monday of this week. Donald Trump, welcome the North Dakota State University football team, the bison to the White House because a, they had one there, college football division championship, and just like last time when he brought in the college football national champions, the Clemson Tigers, he decided to serve them a hillbilly fast food buffet, but not to repeat the food he gave the, the Clemson Tigers. He gave the bison a buffet, then included some big macs and some chick filet. Now, here’s the reason why I’m even talking about this. When it happened with the Clemson Tigers, it happened during the government shutdown. So Trump says, well, I don’t have a staff, a, I guess my chefs not here, so I’m going to pay out of pocket for all of this fast food because I don’t have anybody to cook for these kids, so I’m just going to get a a ton of fast food. I’ll pay for it because the government is shut down.

Well, he didn’t have that excuse Monday. They’ve got room was shut down on Monday. He had a chef, he had somebody ready to cook in the White House. He could have brought in a team of cooks if he wanted to. He could have served these kids real food, and by the way, as was pointed out plenty of times back when it happened the first time during his hillbilly buffet, these are athletes, these are people who do their job by maintaining their body and their physical fitness. That’s not to say that they don’t eat fast food, but they also understand that you can’t gorge yourself on fast food and still maintain peak physical fitness to perform at the level that they perform at guy like me, honestly, if I walked into a place and saw nothing but fast food laying out on the table and they said, help yourself.

Hell yeah. That is a party to me. I’m also not a professional athlete and I’m also not in the White House, and that’s the other difference here too. If I walked into the White House and they said, hey, grab some chicken nuggets and French fries there and then come meet us, I’d say, are you kidding me? This is a once in a lifetime opportunity. This is the most prestigious residents in the entire country. There is so much history, so much honor in that building. The White House, most people will go through their entire existence without even getting close to it. Very few get invited inside and then you hand them a a fast food burger. To me that’s what it is. And we saw video, I know some of the Clemson players from earlier this year. They said, oh, it was great. Yeah, we ate all of it. Oh, wonderful. Well you can also see the video of the mouthing to one another. Like what the hell? I thought this was a joke. I can’t believe he did this.

So they weren’t happy with it either. And I can’t imagine the North Dakota State football team was super thrilled about it. Either you’re somewhere nice, you’re dressed up, you’re getting the biggest honor of a lifetime and honor. That will likely never come back your way. All to be ruined by Donald Trump. Taking it down to his disgusting level and saying, yeah, I could have made a nice food, but instead we send a secret service guy through the drive through, and this is what you get. Don’t drop any on the floor. Enjoy yourselves. Good bye. I got to go watch Sean Hannity show now. That’s what Trump has turned the white house into in the more honor. There’s no more dignity. There’s no more respect. He has taken the most prestigious residents here in the United States and dumbed it down to his level, and that’s a shame for all of those athletes who thought they were going to be having a good, nice, memorable evening instead of once again becoming a laughing stock across the Internet.