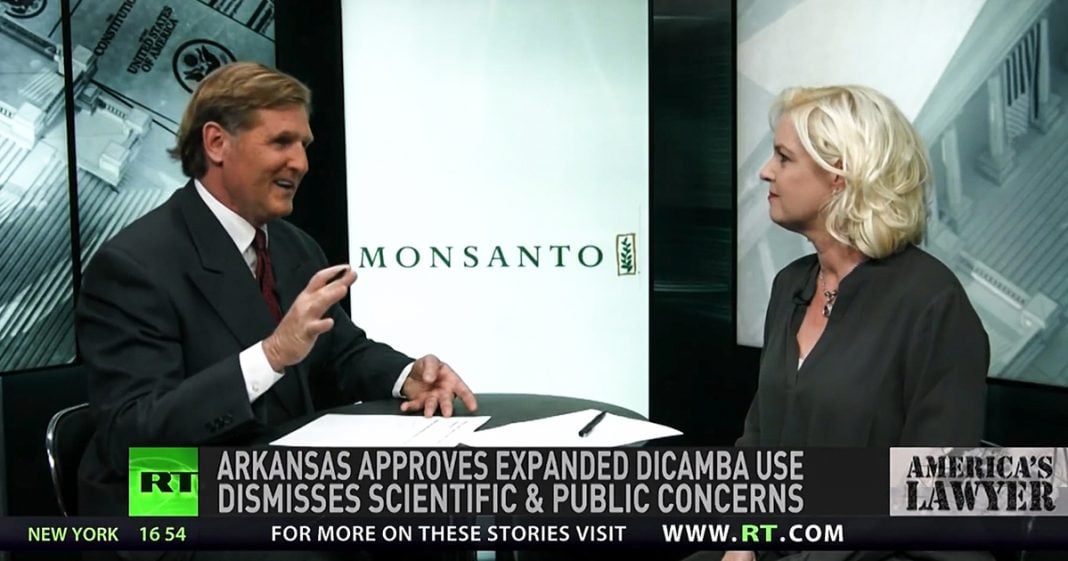 Via America’s Lawyer: Legal Journalist Mollye Barrows joins Mike Papantonio to talk about the controversial pesticide Dicamba, which despite scientific evidence & impassioned public pleas, Arkansas decided to side with chemical giant and manufacturer Monsanto that restrictions on the weed killer should be relaxed.

Mike Papantonio:             Despite scientific evidence and impassioned public pleas against the use of a controversial pesticide in Arkansas, the state cited of course with a giant chemical company Monsanto that, about its restrictions on weed killer. This is no surprise is it Mollye? I’m joined by, you know, we do these stories. How often Mollye?

Mike Papantonio:             Too often because we saw the same thing happen with, with Roundup. It’s happening right now with Roundup and unfortunately with Roundup it’s not only the government, but it’s somewhat the judiciary that’s making it difficult for us to do anything about it. Right now there’s a case going on in California. I’m looking at what’s happening out there. It would scare the bejesus out of you to see the rulings that are coming out of that court.

Mollye Barrows:                Well, this particular situation in Arkansas last year, Arkansas banned the use of Dicamba, which is one of Monsanto’s more popular pesticides, especially popular with soybean and cotton growers. But they banned it between April and October after receiving over a thousand complaints in 2017 of basically crop damage.

Millions and millions of dollars in crop damage caused by Dicamba and what’s called, it’s volatility. Basically it forms into a gas and it spreads. So farmers who have Dicamba resistant crops, who are using seeds made by Monsanto that are resistant to this particular pesticide, want to use this of course to kill a particular pest.

Mollye Barrows:                But it spreads and it causes damage to everything. To honey bees to trees, to gardens, to organic food farmers.

Mike Papantonio:             Well, sometimes you look at their history and you wonder, but here’s the point. The point is you’ve got farmers that say, I’m not going to do business with them. So somebody in the middle of four plots of land that happens to use Dicamba or it could be Roundup, whatever it is, who uses those seeds. The spray doesn’t affect them because the seed is so weird. The seed is such a mutation.

Mollye Barrows:                As soon as Arkansas passed this ban, it took effect last year. The last year was the first year that there was an effect from April to October. Well, that October the EPA came forward and said, eh, we think it’s okay for you soybean and cotton growers who use this Monsanto seed that’s resistant to Dicamba to go ahead and continue to use this spray. So basically it came up for review again because the Arkansas plant board, which is deciding on these rules and restrictions, had a choice at that point.

They can either go along with the EPA or they set new restrictions. But what they decided last week was to go ahead and it’s this compromise of sorts. There’s still going to have a ban in place that will go from May, this time, the end of May through October. But see, the real problem is everything I’ve been reading up on this, that’s the best time of year to spray this. But then it also spreads worse because it’s hot.

Mike Papantonio:             It spreads all over the place. It kills everything around it. Now understand, we’re not talking about Roundup. A huge poison we’re talking about Dicamba that this company has had for quite some time by the way.

Mike Papantonio:             They were looking for uses. Roundup, finally we understand at least, people are paying attention that Roundup will kill you. It’ll cause cancer, it causes all types of problems. So they’re going soft on Roundup and their taking this thing out of their seller called Dicamba. They’ve had it a long time.

They didn’t want to use it because they knew the problems with it. So now they’re, they’re reintroducing Dicamba and they were saying, well yeah, we, we, we kind of our own documents show us that, that Roundup has a potential to cause cancer. Dicamba there’s not enough information out there right now.

Mike Papantonio:             We think it does. Yeah. And we know, we know it destroys property all around the farmer who’s using, again, we’re talking about a seed mutation that won’t die from poison.

Mike Papantonio:             Okay. Well this is phase, this is, this is Monsanto phase two. And the history that we’re seeing is the same history we saw with Roundup. EPA Won’t do anything because it’s like a revolving door. You work for EPA day one, you go to work for Monsanto that day two, or Bayer day two. The, you, you get positions in legislature to fight this off. You get positions in regulatory to fight it off. You pay your way for enough years to where they can make enough billions of dollars on Dicamba before everybody catches on and says, hey, this, this is just like Roundup.

Mollye Barrows:                Well, it’s almost like spice. I know that’s kind of a strange comparison, but when spice, which is that synthetic marijuana, was so prevalent in convenient stores, all they would do is change the chemical formation of it because only one certain chemical was against the law if you changed the chemical. So it’s almost like they were doing the same thing with Monsanto.