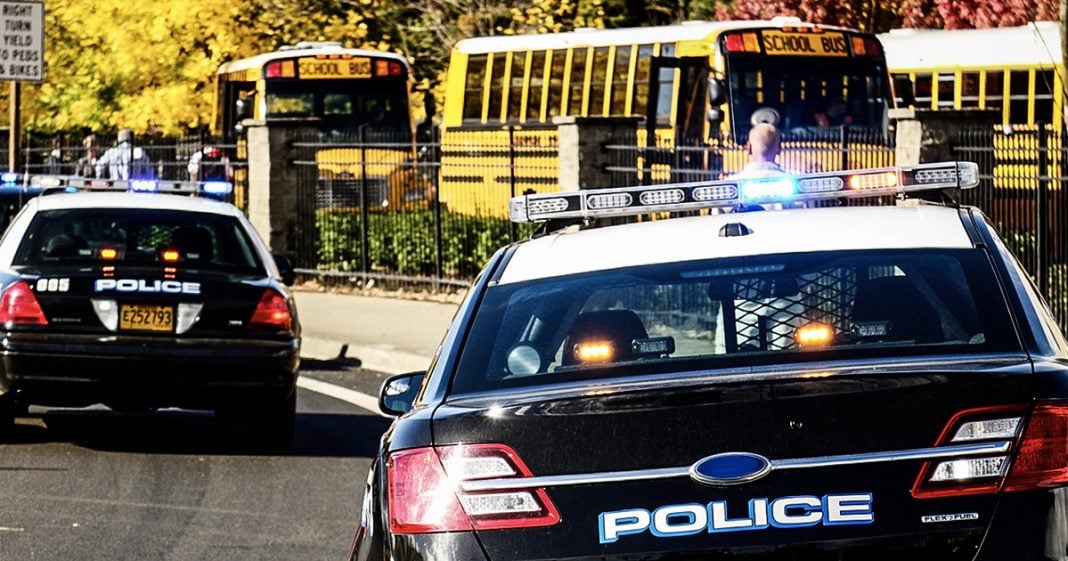 Since virtually nothing has been done to stave off the epidemic of mass shootings in our schools, some school districts have resorted to hiring more police officers to patrol their halls. But this comes at a cost – more and more counselors and school nurses are getting fired to make way for more law enforcement presence. This is not sustainable, and our children shouldn’t be brought up in schools that feel like prisons because we can’t keep them safe. Ring of Fire’s Farron Cousins discusses this.

Earlier this past week, the ACLU released a report showing that more and more schools across the country, in fact, 14 million students across the country now, 10 schools where they have at least one police officer patrolling the grounds all day long. Yet they do not have access to mental health professionals, counselors, or nurses. What’s happening right now across the country, according to this ACLU report is it schools are starting to invest more in armed police officers. Then they are in student’s actual wellbeing. You know the people who help them, the counselors, the mental health professionals that can help identify problems and instead they want to go with the police. Let’s just have a cop here. So this child who may have a mental disability rather than helping them and working with them, which plenty of schools do I know because that is what my wife does. Instead of doing that, let’s just have them arrested and hauled off and then it’s somebody else’s problem.

Millions of students are going to school every day and that is their reality. And here’s another reality that the ACLU pointed out, this disproportionately affects minority students, African Americans and Hispanic students to be precise. They are more likely in the schools to be arrested. Then they are in schools that actually have mental health professionals. There is no correlation whatsoever between increased school safety and the increased number of police officers in that school. The report makes that very clear. There are, however, direct correlations between access to mental health professionals and counselors in school and a reduction in overall crime and violence in that school. It works. It 100% works, but we live in a different country now, right? Our kids have to go to school and they have to go through active shooter drills. You know, I don’t know about you, but when I was in school, the worst drills we had to go through, occasionally we’d have a fire drill.

We’d all have to march out single file under the parking lot, or once a year maybe we’d have a tornado drill. Everybody goes out to the hallway and duck and cover as if that’s going to protect you from a tornado. But nonetheless, today, kids across the country, you have to go through active shooter drills. Teachers have to be taught how to barricade there doors, how to protect their students and that they can’t open their door. Even if a student is outside screaming to get in because they were about to get shot. I don’t know if you knew, but that’s what teachers are taught. If they’re not in your room, they’re not your problem, and opening the door puts the rest of your students at risk. Principles are being taught, coded phrases that they can say over the intercom that’ll let teachers know that there is an active shooter or that it’s all clear in the shooter has been taken care of.

And that’s one of the other reasons why we’re seeing these increased police officer presence in our schools. But rather than addressing the problem of mental health, rather than addressing the issue of gun control and banning assault weapons, again, rebranding them, I should say we’re instead turning our schools into prisons, walking around with armed police officers ready to, you know, throw somebody to the ground and handcuffed them because they got an a tiny fist fight in the hallway because they had a mental disability that still allows them to be functional, but maybe makes them quickly prone to rage. But rather than working with a mental health professional to get it under control, which is possible, they would rather throw the kid in jail. And that is apparently the country we live in in 2019.