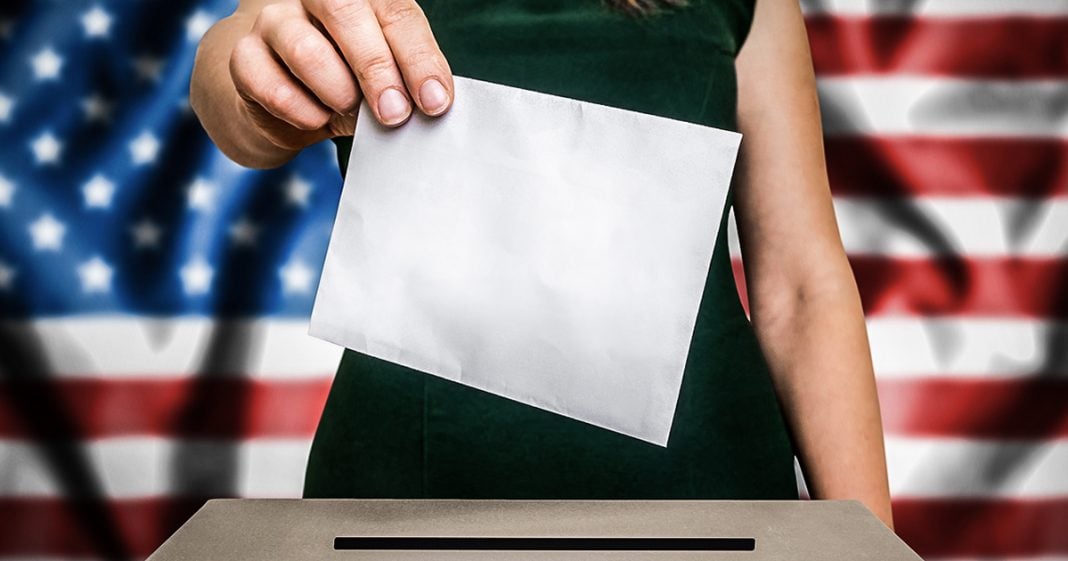 A group of blue states are joining together to come up with a plan to get rid of the electoral college. Their plan technically wouldn’t change the electoral college, but it would alter the way in which states award their electors. Under the plan, the winner of the national popular vote would get the electors from that state, regardless of which candidate “wins” that state. Ring of Fire’s Farron Cousins explains what this could mean for the future of our elections.

So far, 12 states across the U.S. Have banded together to help abolish the electoral college, and by abolish the Electoral College, I don’t mean that they’re actually getting rid of it. They’re just revamping it so that it technically wouldn’t actually matter in the coming elections. And here’s how they’re doing it. These 12 states have now passed legislation that would allow them to change the way the electors in their state or delegated. In fact, at that point, under the new legislation, it doesn’t matter which candidate wins that state, whether it’s Colorado, whether it’s New York or Washington DC or all of the New England states minus New Hampshire who have signed onto this. Whoever wins the national popular vote, we’ll get all of the elect doors from that state, whether or not they won that particular state. So what these states are doing is saying, we’re going to base this on national popular vote.

Doesn’t matter you when our state great for you, but if you lose the popular vote, you don’t get our electors because we want to be representative of what the people in the United States from coast to coast had to say at the polls. And that’s how it should be. This is a smart move because it doesn’t go as far as to completely eliminate the electoral college, which could run into constitutional challenges. And possibly you need an amendment to do that. Oh No, no. They’re just changing procedure, which is a lot easier to when should these laws and they will get challenged in court. Now obviously these 12 states do not have enough electoral votes to swing an election. Um, although I think combined, they do makeup for 121 total electors, uh, between all the states. Either way, it’s a good, a good portion of them. 181 excuse me, 181 electoral votes short of the to 70, but not you buy only, you know, 89.

So you get a couple more states to join in and suddenly this thing has real momentum. Unfortunately, again, right now all that’s really joining in our blue states and it’s got to be damn near impossible to get red states to join in because they understand that doing so would have put an end to the Bush presidency. It would have prevented the Trump presidency. Man, it would have changed the course of the United States for forever and so they’re probably not going to sign onto this, but there is always hope cause it may not happen in 2020 and may not happen in 2024 but no state stays within the grip of a single party for all eternity. This is a waiting game at this point and I know that sucks. There’s dire things happening. We need this immediately, but sometimes you can’t get it immediately. So yeah, this is a waiting game, but it’s one that will be well worth the wait.

If we could get some states like California, Florida, some of the states in the Midwest, if we can get them to sign on and pass this same legislation, then suddenly the next presidential election becomes an entirely new thing altogether. One in which the electoral college won’t matter. So candidates can spend more time going out there talking to people they wouldn’t otherwise be talking to. Maybe because their state doesn’t have that many electors, but they still have voters. They still have people who want to be treated like they do matter. And that’s what’s missing. Everyone’s vote in this country should matter, but because of the electoral college, the way it’s currently set up, it doesn’t. You got to be in New York or Florida or Texas, California, Ohio, Pennsylvania. You live in those states. Candidates care about your votes. Anywhere else may, you might get a visit, but you’re damn sure not going to get the same kind of attention that people in those big electoral states get. And that’s why it has to change because those people who, when you’re not just president of Florida, Texas and California, you’re president of all 50 states and every one of them matters. Getting rid of the electoral college would make each state and each voter matter just a little bit more.