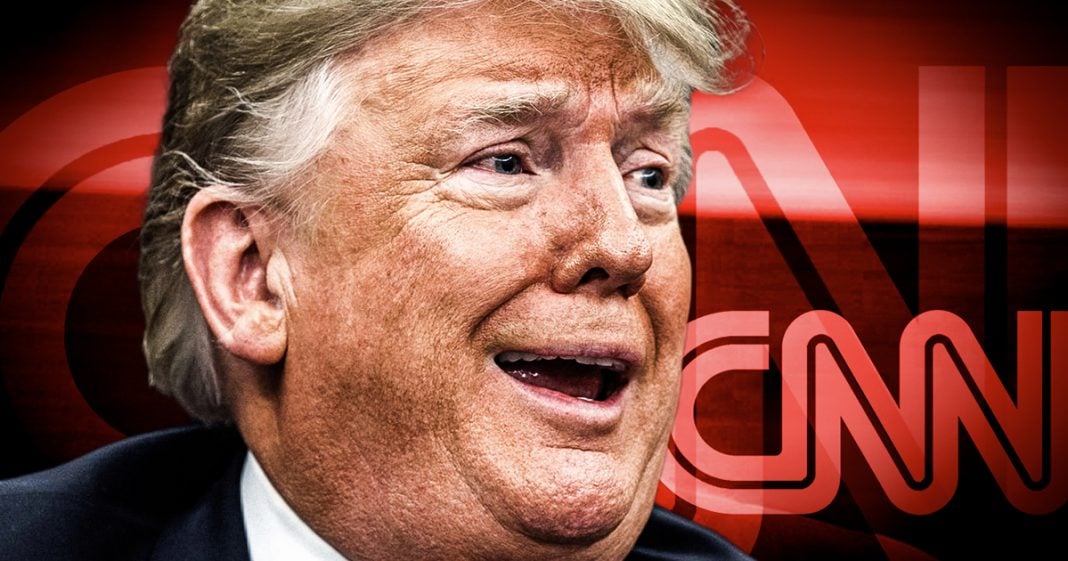 Last week it was Michael Cohen’s admission that Trump engaged in financial fraud schemes. This week it was the revelation that Trump interfered with the Justice Department to deny a CNN merger deal in order to punish the network. And in the weeks prior to this, more and more crimes had been revealed, yet nothing ever happened to Donald Trump. How many impeachable offenses is it going to take to remove him, or is he truly “Teflon Don”? Ring of Fire’s Farron Cousins discusses this.

This week, reports came out, uh, specifically one report from Jane Mayer in the New Yorker did said that Donald Trump attempted to block the time Warner a scene and merger because he wanted to punish CNN and he didn’t want CNN to become a threat to Fox News. He abused his power, and that is 100% an impeachable offense in case anyone’s forgotten, because the new cycle moves a little too quickly. That was Monday, by the way, five days before that, five days before that, Michael Cohen sat down for testimony to the house where he implicated Donald Trump in no fewer than 14 different potentially criminal activities, any one of them an impeachable offense. So for those doing count at home, in the past 10 days, the president has been implicated in 15 different individual activities that could easily result in his impeachment throughout his entire presidency. We have seen very clearly obstruction of justice, multiple instances of obstruction of justice, attempted witness tampering via Twitter and all sorts of other financial fraud schemes, violations of the emoluments clause, uh, violations of the Hatch Act.

Again, this man from day one has committed impeachable offense after impeachable offense, after impeachable offense and every week at this point we’re getting new stories about how this man allegedly broke the law. My question at this point is how much more of this do we have to go through? How many more times do we have to see the headlines Trump implicated in impeachable offenses? How many times do we have to see people on Twitter say, man, this is it. There’s no coming back from this. Something’s gotta happen with this. And then nothing ever does. Nothing happens to this guy. And I hate to say it, I hate to sound like I’m defeated here, but that seems to be the story of his entire life. This guy has screwed up. He screwed around, he’s destroyed marriages, destroyed families, destroyed businesses. Now he’s destroying the United States. And at some point the public has to say, enough is enough.

But the public saying that is not the same as Congress doing something and impeaching him. And yes, I know. And to their credit, Democrats are working very hard in the House of Representatives to hold him accountable and uncover the extent of these potential crimes they believe he committed. But to what end? You know, seriously what’s going to happen. Suppose these 81 people who just get a were given request for documents, they all comply. That’s a big assumption. The handover, all this evidence and every one of those 81 people or an organization’s is able to point to one crime. Donald Trump committed 81 different crimes. Republicans won’t vote for it. Republicans in the Senate won’t vote to remove him. So we’re in a Bill Clinton scenario. You are impeached but you weren’t removed from office. Now we have to move on because there’s nothing else we can do and that’s the point of this.

It’s not that I’m defeated. It’s not that we shouldn’t pursue these investigations because we should, but what we have to do is stop thinking this is it. There is no coming back from this because Trump unfortunately is proven time and time again. He’s going to come back for a, from it. The only thing we can do is get energized, get active, get educated, educate others and vote. That’s how you get Trump out of office and at this point, I firmly believe that is the only thing that gets Donald Trump out of office. Unless as fast food habits catch up with them, you got to vote him out. We cannot sit here and think that every time a new bombshell story comes out, it’s going to tank his presidency. Republicans will never go along with it. You want Trump out of office, go to the polls in November, 2020 and send that message very clearly. Anything short of that is putting your faith in something that’ll never happen.