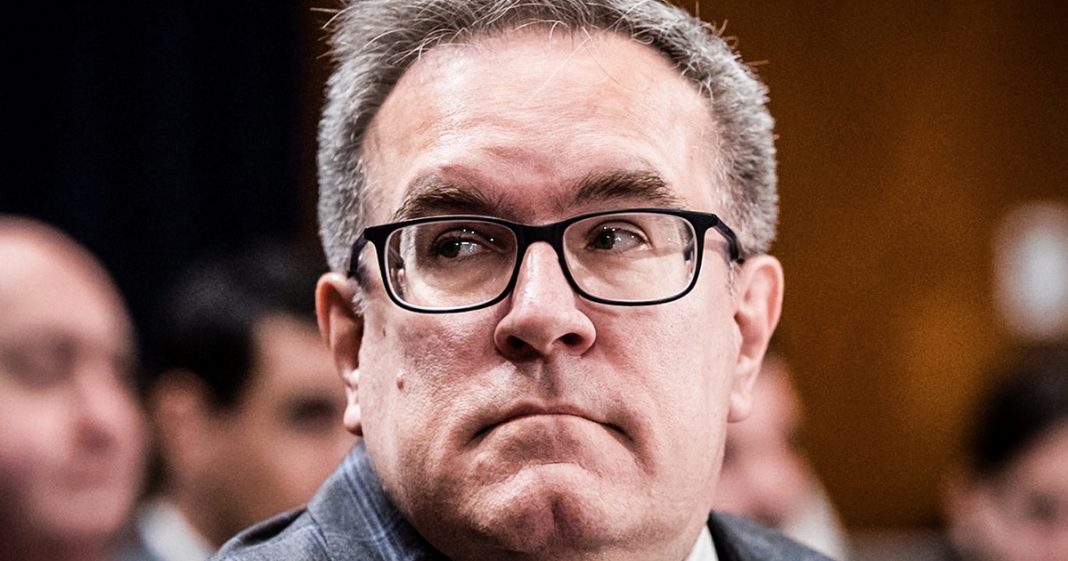 According to new reports, Andrew Wheeler, the head of the EPA, continues to meet with fossil fuel leaders, lobbyists, and other members of the industries that he is supposed to be regulating. While this isn’t completely unheard of, the number of meetings that he’s had with them in such a short span certainly is, and given his past history as a lobbyist for these groups it is unlikely that he’s meeting with them to tell them to clean up their acts. Ring of Fire’s Farron Cousins explains what’s happening.

You know, we often overlook the fact that we still have a gaggle of morons running government agencies who are setting policies and doing things that are harming American citizens every day. And we overlook it because we’ve got that orange buffoon sitting in the White House. You know, he attracts all the attention. But while we’re focused on him, we forget the fact that we have other organizations like Ben Carson at Hud trying to slash affordable housing. We have Betsy devoss of the secretary of education siting with a rapists over victims. And of course one of the worst of all is we have Andrew Wheeler sitting right now as the acting head of the EPA because he has not yet been confirmed as the real head of the EPA who refuses to stop meeting with industry leaders and lobbyists in his new capacity as the leader of the EPA. According to a new report between April and August of last year, April and August, he met with industry leaders, lobbyists, and other executives from the industries that he is supposed to be regulating more than 50 times, more than 50 times.

He is averaging once every two and a half days meeting with somebody from the industries that he is supposed to be regulating. It’s not unprecedented for the leader of one of these agencies to meet with the people they’re regulating. It’s not that kind of frequency though, once every two and a half to three days, that is unprecedented, especially when you factor in that he is not meeting with any environmental groups. In fact, his predecessor, Scott Pruitt, who is only in office for a little over a year, uh, out of all the meetings he had, fewer than 1% of them were with environmental groups. People that actually care about reducing pollution, making the earth a little bit better, allowing us all to breathe a little easier. But Andrew Wheeler, the former coal lobbyists who is now again sitting as the head of the EPA, not yet confirmed, but still there, he will be confirmed.

It’s just got to go through the Senate. The Republicans will pass them in. Not a big deal. He’s going to get it, but he’s only meeting with lobbyists. He’s only meeting with people who do not want him to do his job. He is meeting with people that he used to work with as a lobbyist, his friends, his bodies, the people who use to employ him are on the list from his calendars that have been obtained. That’s who he’s meeting with and that’s who he cares about and that’s who he’s regulating for. And by regulating for, I mean deregulating for because God knows this man is not going to enforce any environmental law on the books, which is why since Trump came into office, we have seen environmental prosecutions fall by more than 90% here in the United States, more than 90% pollution levels are going up, emissions are increasing in our country,

And we’re holding fewer and fewer people accountable. We have cancer causing toxins entering our water every day. 110 million Americans. One third of the country is drinking water contaminated with p f Oh, A’s chemicals. That 100% cause cancer in human beings according to the EPA is announcement in December.

But one out of every three Americans is drinking that water every single day containing unhealthy levels of these chemicals and Andrew Wheeler, rather than doing his job, rather than regulating this, rather than holding people accountable is shutting out environmental groups and leaders and instead meeting with the industries who are poisoning us and saying, come on in, have a seat. Go Checkout Scott Pruitt’s $40,000 phone booth, and let’s talk about what I can do to make your industry a little better. That is today’s EPA brought to you by the Republican Party.