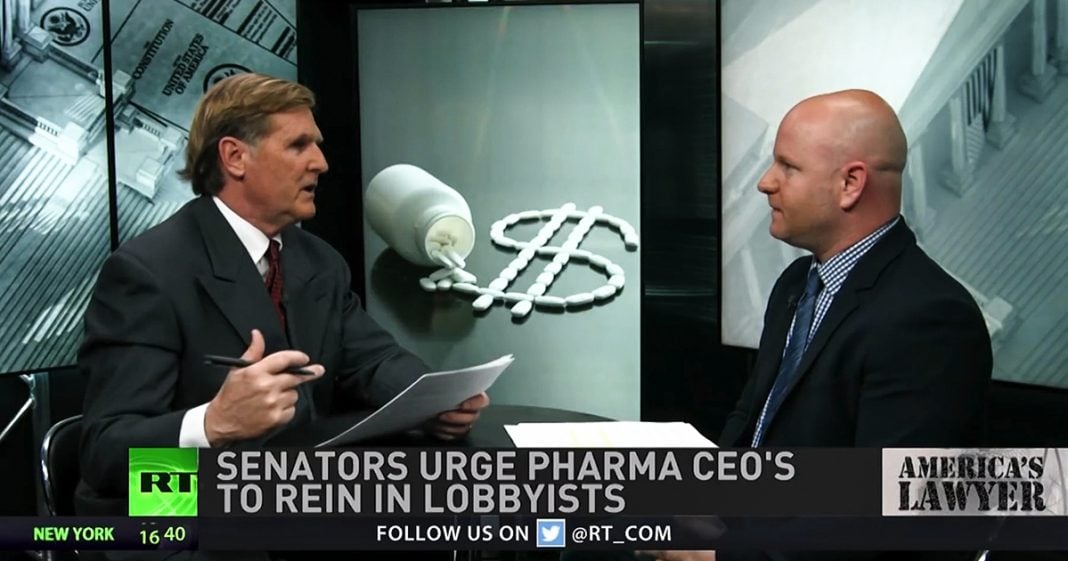 Via America’s Lawyer: Last week, drug company executives were hauled before the Senate to explain while the, why are they gouging American citizens on the cost of their medications. Mike Papantonio and Trial Magazine Executive Editor Farron Cousins discuss.

Mike Papantonio:             Last week, drug company executives were hauled before the Senate to explain while the, why are they gouging American citizens on the cost of their medications and it didn’t go well for those executives. Finally, finally, somebody starts asking these people, let me get this right. We got two thousand, ten thousand, twenty thousand percent markup on your drugs and you’re telling us it’s because R and D, that’s a lie because these drugs had been on the market forever and you’re still rise raising the prices.

Farron Cousins:                  Well, and the reason they’re as much of the problem is because Big Pharma tends to spread their money out almost evenly. Republicans get a little bit more, but it’s statistically insignificant. So they bought both sides. But here’s an interesting thing because yes, all of these executives said well R and D is so expensive. We spend a lot of money. There was not one single drug between the year 2010 and 2016 approved by the FDA that was not funded and developed without taxpayer money. Every drug from 2010 to 2016 that was approved.

Mike Papantonio:             Explain how that works and universities, go ahead and talk about that.

Farron Cousins:                  You know, taxpayers, we fund the universities. The government itself hires out scientists to do this research. We have government funded scientists and every drug from 2010 to 2016 was paid for and developed with tax dollars.

Mike Papantonio:             So here’s the, here’s the real numbers on it. 75% of the money that they’re saying is actually for R and D actually is for advertising.

Mike Papantonio:             It’s all these ads that you see every 10 seconds on the air. That’s where the money’s going. And now what I love about this right now, first of all, I’m not optimistic that much will come out of it. This is all a show. This is show. They’re going to appear in front of these congressmen and the Congress going to ask them a few tough questions, and you’re only going to have a couple of people like Ron Wyden who actually does anything about it.

You’re going to have Cory Booker’s and the Feinstein’s. You’re gonna have all those people that say, ah, you know, it’s, let’s give them a break. They won’t say that overtly, but that’s what they’ll do behind closed doors. Farron, thanks for joining us.