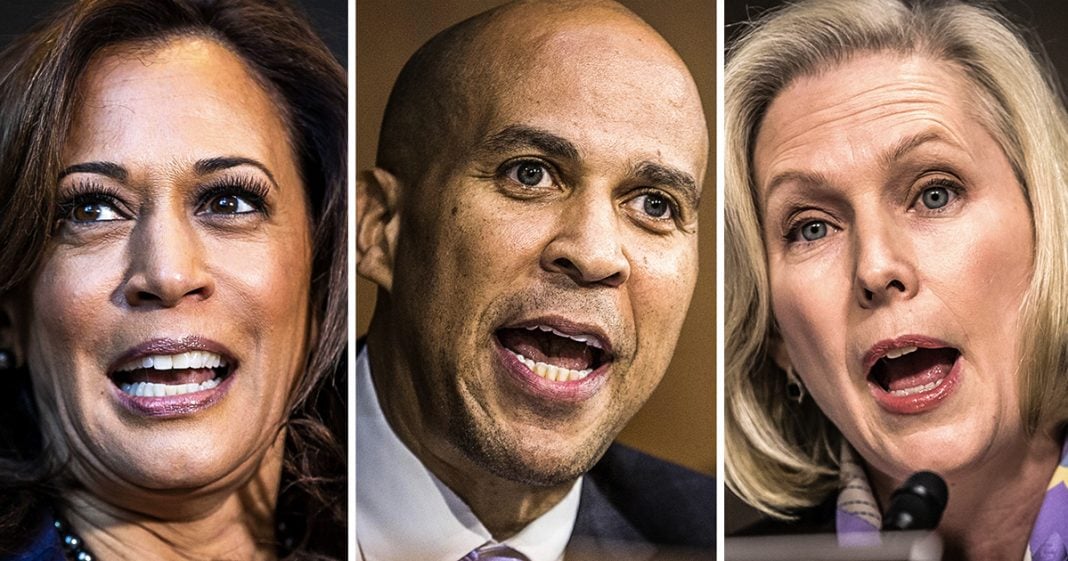 According to campaign finance records, both Donald Trump and Ivanka Trump were more than happy to shell out thousands of dollars for Kamala Harris’ campaigns for Attorney General in California. The Harris camp claims that the money from the Trumps was never used for the campaign, and that many years later they donated the money to nonprofit groups, but it still raises questions as to why the Trump family would want Harris as the AG. Not be outdone, Cory Booker and Kirsten Gillibrand have also taken funds from the Trump family over the years. Ring of Fire’s Farron Cousins discusses this.

There’s a disturbing trend that has been revealed amongst some of the, uh, how should we say more centrist people running for the Democratic nomination for president in 2020. And that is that three of them at least have taken money from Donald and or Ivanka Trump. One of the most glaringly obvious and disturbing cases is Kamala Harris. According to a new report, Kamala Harris over the span of several years, took $6,000 from both Donald Trump and Ivanka Trump’s $6,000 combined. It was given over the span of several years. She also took a few thousand dollars from Steve Mnuchin, the man who she was supposed to prosecute and put in jail, but made the decision not to. And he rewarded her by giving her a few thousand dollars for her campaign. Cory Booker was the recipient of a fundraiser held for him by Jared Kushner and Ivanka Trump. They held a fundraiser in New Jersey for Cory booker. And then for really no obvious reason at all, the Trump family also gave money to Kirsten Gillibrand, who represents a state that the Trumps really don’t have much business in.

So this all begs the question, why was the Trump family giving these democrats fundraisers? Why were they giving them money? We know why Steve Mnuchin gave money. He didn’t want to go to jail, and now he’s the secretary of the treasury. But to me, it’s also very telling about what the Trump family saw with regards to these particular politicians. They saw these as people who were not going to raise their taxes, who would not increase regulations on their businesses, and who would essentially rule for the billionaire class. That should give us all calls for concern. And I know most of these people have given the money away to nonprofits. Of course, that only happened several years after they took the money years after they took the money, and then they realized, oh, Trump’s a bad guy and everybody hates him. Uh, let’s donate. The amount that they gave us to a nonprofit doesn’t work, doesn’t absolve you from taking this jackass is money.

Three more people who are on the fence about whether or not to run in 2020 have also received money from the Trump family. Joe Biden, John Kerry and Terry McAuliffe, they have all received several thousand dollars a piece from the Trump family. This is a problem. This is something that these candidates and potential candidates should, they choose to run. They’re going to have to answer for this and the answer can not just be, well, I ended up giving the money to a nonprofit many years after they gave it to me. That uncut it, that’s not a viable excuse. Why did you accept the money in the first place and more importantly, why did they feel it necessary to give you this money? What did they want from you or what did they think you are going to give them? This is bad for these candidates and they have a lot of explaining to do and I can promise you I don’t think any of them are going to give us any kind of answer that’s going to make us feel better about them running for president. This is the first major red flag that we have gotten from all three of these candidates. The first major one. Now we’ve seen bad things in their history, but since they’ve been running for president, everybody seems to kind of be on the up and up. Well, we’re super progressive, but now this the first time since all of them have announced that they’ve got this big red flag, and for me, this might be a red flag that I think is impossible to get past.