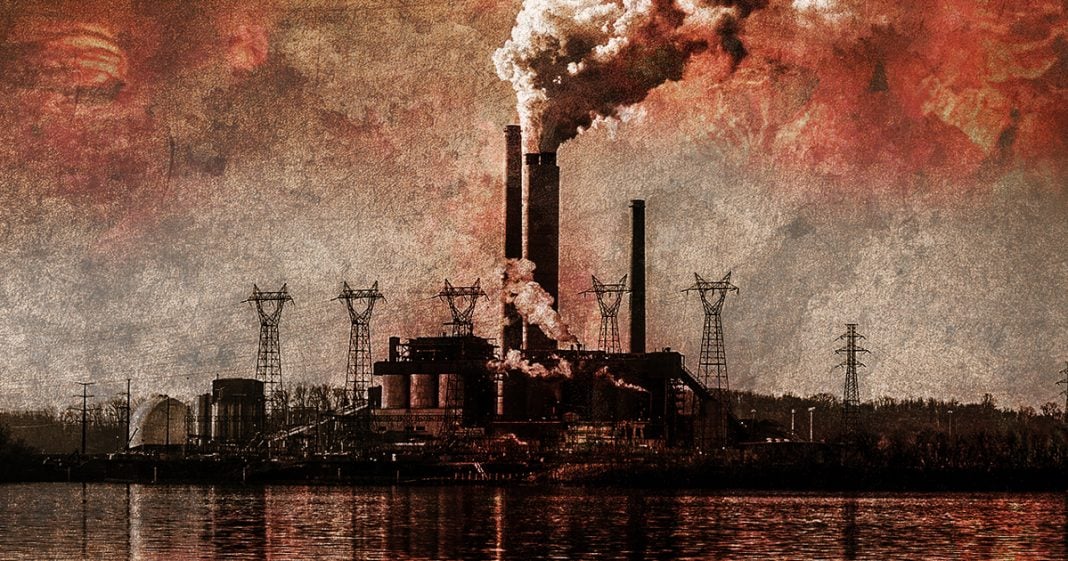 According to a new report, 90% of coal-fired power plants across the country have completely contaminated the groundwater surrounding their plants with heavy metals that come from the toxic coal ash waste products they produce. This toxic coal ash is filled with cancer-causing toxins and other endocrine and neurological disruptors that can lead to lifelong problems. Ring of Fire’s Farron Cousins explains what is happening and how we can put an end to it.

According to a new report put out in part by the Environmental Integrity Project and Earth Justice, 91% of the coal fired power plants across the United States. 91% have shown toxic levels of heavy metal in the groundwater surrounding those power plants and those heavy metal toxins that cause cancer. They disrupt into current systems, they cause neurological damage. Those heavy metals are coming from the coal ash that is produced as a result of burning coal for fuel here in the United States. And because we as a country do such a horrible job of regulating what the hell happens to coal ash, this contamination is getting worse. We know that this coal ash contains things like mercury, cadmium, arsenic, chromium, all sorts of things that once they get into the human body, in this case, by consumption because the groundwater is contaminated, they’re going to wreak havoc on your body and not just temporary.

It’s not just going to mess you up. You know, maybe have a couple of days where you can’t breathe so well. These are permanent damages. These are things that can’t just simply be flushed out of the body and okay, I’m fine now. You disrupt the neurological system of a developing fetus or even a young child, you’ve just ruined their life essentially. You’ve ruined their life. Where the Republicans, the pro lifers on this issue, Huh? You know, oh, we can’t have a woman who was raped, terminate her pregnancy, but it’s totally cool if that woman drinks a glass of water contaminated with corporate toxins that are going to destroy that child’s chance of ever having a normal life. Totally cool with that. Right? We can poison the hell out of a fees. It fetus, we just can’t do anything. You know, if a woman decides that she doesn’t want to carry this child, no, that’s horrible, but let’s just destroy it from the inside and then make it a burden on the state for the rest of it’s like, yeah, sure.

That’s, that’s real prolife of you there. The bottom line is that we have a very real problem in this country that is apparently getting much worse and that is the poisons seeping out of these coal fired power plants. And here’s the sick, twisted part, folks. We shouldn’t have to be doing this. We as a country could have moved past coal years ago had we had a government in place that wanted to move us past fossil fuels, we could have built the infrastructure for renewable energy 15 years ago. Yeah, the technology has come a long way since then. So we could have just upgraded it. We could have invested in a jobs training program to move coal miners and power plant workers into the renewable energy field, better jobs, cleaner jobs. You’re not going to get black lung building solar panels. But we didn’t. We could have started it under Bush. We could have finished it under Obama and we could be living in a better world today day, but we didn’t. And now we’re behind the curve. We’re behind the eight ball. It’s going to take years now to put the infrastructure in place to switch to a renewable economy. And in the meantime, as this report points out, we’re just gonna keep poisoning more and more American citizens because we were too damn stupid years ago to address the problem before it became a real threat to humanity.