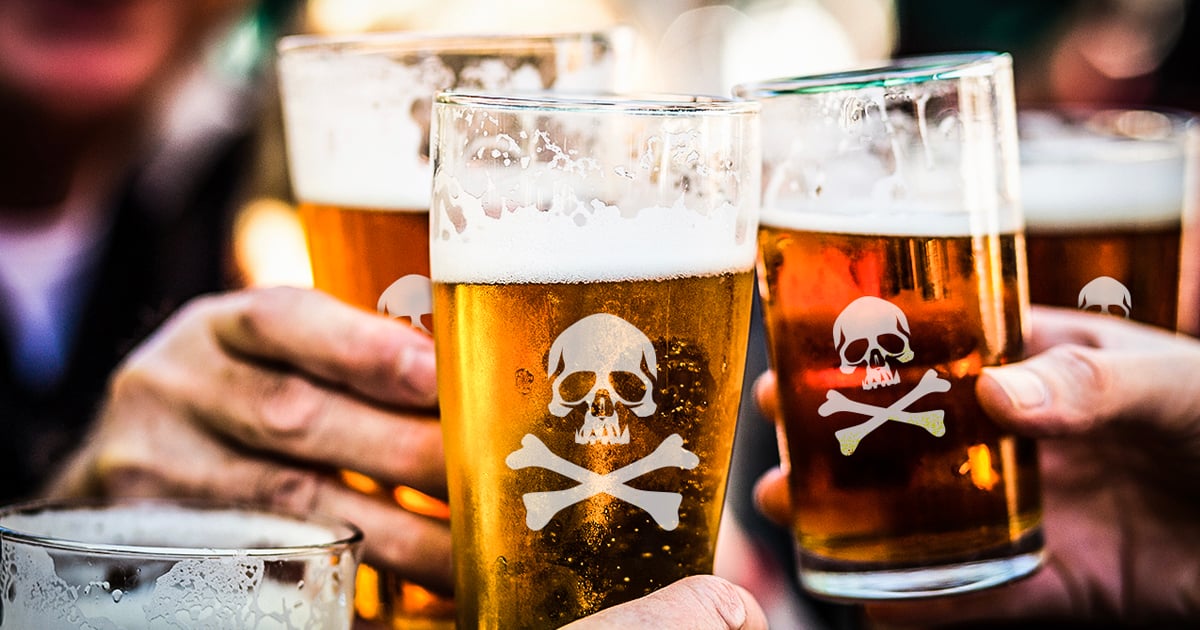 New research reveals that 19 of the 20 most popular beer and wine brands contain dangerous amounts of Monsanto’s glyphosate, the active ingredient in Round Up. This chemical has been labeled a probable human carcinogen by the World Health Organization, even as Monsanto (now Bayer) continues to tell us that this product is completely safe. Our foods are contaminated now, so if this product is as dangerous as scientists say it is, we are all at risk. Ring of Fire’s Farron Cousins discusses this.

Bad News for anybody who likes to unwind after a stressful day at work with either a nice glass of wine or a nice cold beer. Because according to a new study of the 20 most popular wine and beer brands here in the United States, 19 out of those 20 tested positive for containing a containing Monsanto’s glyphosate poison. Now, if you’re not familiar, glyphosate is the active ingredient in Monsanto’s roundup weed killer that is according to the World Health Organization, a probable human carcinogen that has been linked to various different forms of cancer, including Non-Hodgkin’s Lymphoma. Just about a week ago, a new report came out saying that exposure to glyphosate increases your risk of getting cancer by 41% and 19 out of the 20 most popular beer and wine brands in the United States tested positive for containing this carcinogen. Here they are. I’ll read the list Sutter Home Merlow, Berenger Founders Estates Moscato, Barefoot Cabernet Sauvignon in Katari, Marbach, Frey Organic Natural White.

Those are the wines and here are the beers. We have Coors Light, Miller Light, Budweiser, Corona, Heineken, Guinness, Stella Artois, Ace Perry Hard Cider, Sierra Nevada Pale Ale, New Belgium Fat Tire, amber ale, Sam Adams, Stella Artois, and Sam Smith’s Organic Lager. Every single one of these beverages tested, came back positive for containing Monsanto’s glyphosate. That’s a very real problem. Now the company came out, which is now owned by Bayer instead of Monsanto and said, hey, prove lacks the level of glyphosate in these beverages as well below what the EPA says is a safe limit, which is ironic that they would point that out because this EPA and the company frequently throws this in our face. It says that glyphosate’s not harmful, so if it’s not harmful, why would there be a safe limit? The story of glyphosate is a very sorted one and you have to go back to the nineties to fully understand what’s happened with our EPA and the regulation of glyphosate because back in the early nineties late eighties actually I believe they said that yeah, glyphosate gives you cancer unequivocally, it gives you cancer and then Monsanto intervenes. Spent a lot of money, funded a bunch of fake studies and then the EPA said, okay, nevermind, it doesn’t cause cancer. Oops, sorry. But you see, Monsanto wasn’t able to pay off the World Health Organization. They weren’t able to, you know, fund politicians to interfere with that.

And the World Health Organization says, no, no, no. EPA had it right the first time. Glyphosate, according to the available documentation causes cancer and now we’re drinking in our beers, we’re drinking it in our wines, we’re eating it in our morning cereals we’re eating at. Anytime we have something that has a, a food based, uh, or excuse me, wheat based rice-based corn based, really any crop based building block, that’s what’s happening because glyphosate as being dumped by the barrel on farms all over the United States and really across the globe. So when it gets dumped on those crops is, stays in, it stays in the plant. You can’t cook it out, you can’t wash it out. It lives there. Now of course that is until you consume it, at which point it lives inside of you and that is where it does the most damage. But Bayer and Monsanto, whatever they want to call themselves today, they don’t want you to understand that.

And here’s my prediction. As more and more of these studies come out, as we find out that essentially every food product we’re putting in our body is tainted with this poison Bayer and Monsanto are gonna face the biggest lawsuits this country have ever seen that actually make the tobacco lawsuits look small in comparison, because this isn’t just going to be consumers coming after them. It’s going to be every major food company in this country suing the pants off of Bayer and Monsanto for not disclosing the risks that the EPA itself knew about in the 80s but then backtracked after pressure from the industry. They may have thought they won back then, but trust me, the big ones are coming and there will be no walking away for baron. Monsanto.