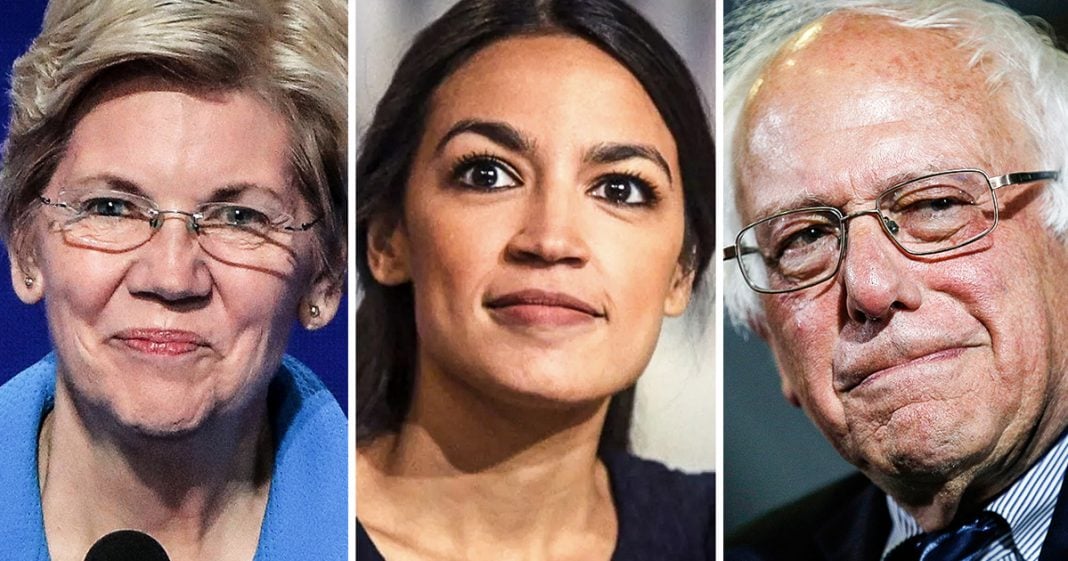 A group of progressive lawmakers including Bernie Sanders, Alexandria Ocasio-Cortez, Ro Khanna, Elizabeth Warren, and many others are signing onto a pledge saying that they will not support the endless “forever wars” that the U.S. loves to engage in. This is a big leap forward, and it shows that the military industrial complex might struggle for relevance as the country continues to move to the left. Ring of Fire’s Farron Cousins discusses this.

A group of progressive law makers. In fact, eight progressive law makers have signed onto a pledge released by a group called common defense yesterday saying that they will not under any circumstances support these endless wars that the United States continues to engage in and pretty much has been engaging in since the year 2001 these lawmakers include Senator Bernie Sanders, Senator Elizabeth Warren, Senator Jon Tester. We have Ilhan Omar, who’s under fire for completely fraudulent reasons right now, which is a whole nother topic. But what they’re doing to Omar is disgusting. Uh, Alexandria Ocasio-Cortez, Rashida Tlaib, Ro Khanna, and Mark Poe can all of these law makers, all of them hugely progressive, have signed onto this pledge from common defense saying, we will not support the endless wars that the United States won’t stop starting. And this group, common defense has pointed out that since 2001, two and a half million US troops have fought in places like Afghanistan, Iraq, Syria, Yemen, Jordan, Niger, Somalia, and Thailand.

Those are just some of the areas where we have active duty members of the military going out there being forced to fight and they don’t even know why at this point. On top of that, the group points out that a lot of the people who went and fought in the Iraq war, they now have children who are about to become of age to where they could go and fight in the same war and we have no plan. We have no exit strategy. Not for Iraq, not for Afghanistan, not for any of these places. Syria, Yemen, we have nothing. We don’t know why we’re there and we don’t know how to get out and we don’t know what the goal is and that’s what this group is trying to get more lawmakers to sign on and realize the United States has a policy and unwritten but standing policy of endless war.

That’s how we show our strength. That’s how we show this world who’s in charge, but all we’re doing is creating these hell holes of horrendous living conditions for civilian populations. I guess actually those are the civilians we let live because we’re actually killing civilians across the globe at an unprecedented rate. That seems to be growing even faster. This has to come to an end, so I applaud each and every one of these lawmakers who had the courage to sign on to this petition and tell the country that enough is enough. These endless wars have to stop. The US cannot be in the business of forever war, especially when we don’t know why we’re there or how the hell we’re ever going to get out.