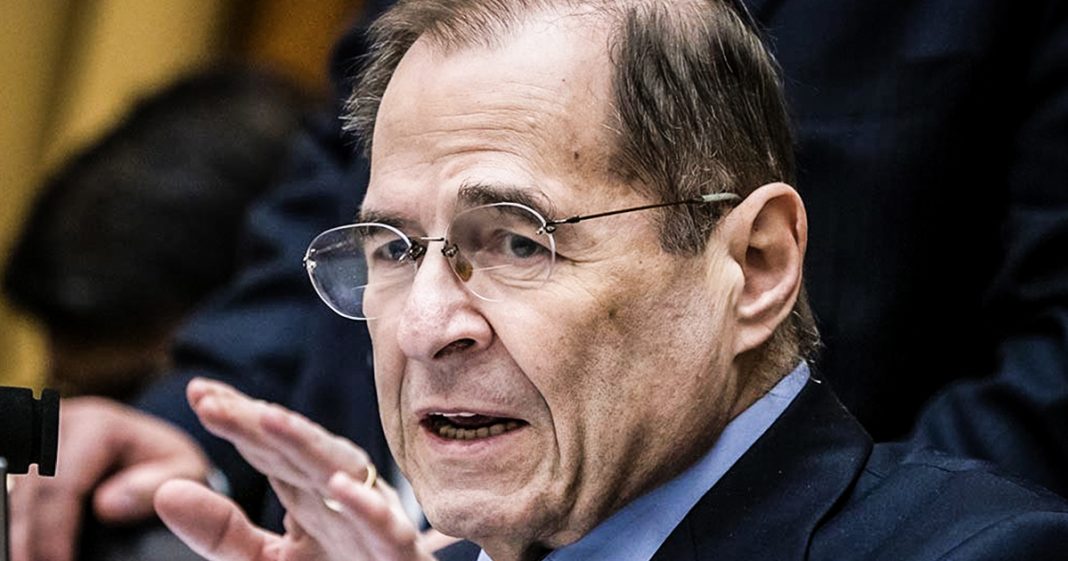 Democrats on the House Judiciary Committee haven’t wasted any time since the Michael Cohen hearing to get their hands on documents that may corroborate Cohen’s testimony. On Monday, the Committee sent letters to more than 80 individuals and organizations requesting documents that they feel are vital to their investigations. No one was spared, and no group was off limits. Ring of Fire’s Farron Cousins explains what this means.

If you’ve been following Donald Trump’s Twitter feed for the last 24 hours, you’ve seen him freak out. And the reason he’s freaking out is because Democrats in the House of Representatives are moving forward with investigations. On Monday. They sent requests for documents to more than 80 individuals and organizations, all of which are somehow tied into Donald Trump, his administration, his transition, his campaign, his organizations, every facet of this man’s life. If you’ve been a part of it, you likely got a request from house Democrats yesterday on the Judiciary Committee to turn over any and all documents that you may have. And of course, as I mentioned, Donald Trump is freaking out. He claims this is illegal, that it’s a phishing expedition trying to find a crime. Now that the collusion claims have fallen apart, which they 100% have not fallen apart. That’s Robert Mueller’s arena and we have no idea what he has to say.

They fallen apart is an absolute lie. But nonetheless, House Democrats are doing their own thing and it’s kind of based on what Michael Cohen told them last week when he implicated the president in multiple different criminal activities. So of the 80 plus people and organizations that have gotten these a request for documents, um, here’s just a few of them. You’ve got Allen Weisselberg, who Michael Cohen did throw under the bus last week. You’ve got American media incorporated, which is the group that owns the national enquirer that helped to bury stories that were negative about Donald Trump, Cambridge Analytica. You know that, that’s social media group that was in charge of helping to spread disinformation. Corey Lewandowski, David Pecker from national inquirer. Uh, Don McGahn, Donald J. Trump revokable trust Donald Trump, jr Eric Trump, Eric Prince hope Hicks, Jared Kushner, Jeff sessions to roam Corson Corsi, Juliana Sanje, Michael Flynn, Michael Flynn Junior Paul Manafort rights Priebus, Roger Stone, Sean Spicer, the White House, the Trump campaign, the Trump Foundation, the Trump Organization, the Trump transition, Wikileaks Kushner companies.

And of course the NRA. That is just a small selection of all of the names that the Democrats are hoping are going to turn over whatever documents they have. And here’s the thing, I’m willing to bet most of them aren’t going to turn over a damn thing. It’s going to take subpoenas, it’s going to take legal action and even then these people are probably going to try to fight it in court and what Trump calls a fishing expedition is actually based on evidence. They have reasons why these specific people or groups were targeted and it’s not all for the same investigations. Obviously with the NRA and American political action group taking money from foreign sources and trying to conceal it. That’s not legal. So yeah, the NRA thing really doesn’t have much to do with Trump, but it’s damn sure is something that needs to be investigated to shut down this organization that is essentially trying to put guns in the hands of every American, including those who damn sure don’t need them.

But nonetheless, things are getting bad for Donald Trump and they’re going to continue to get bad. I don’t foresee any point in the future where things are going to start getting better for him. And this is exactly what this man deserves. And yeah, I don’t care if the Democrats are going on a fishing expedition, because I’m willing to bet that with all these documents, with all these people, with the inevitable subpoenas that are going to come, yeah, they’re eventually going to catch something on this fishing expedition. And that is why Trump is so afraid right now.