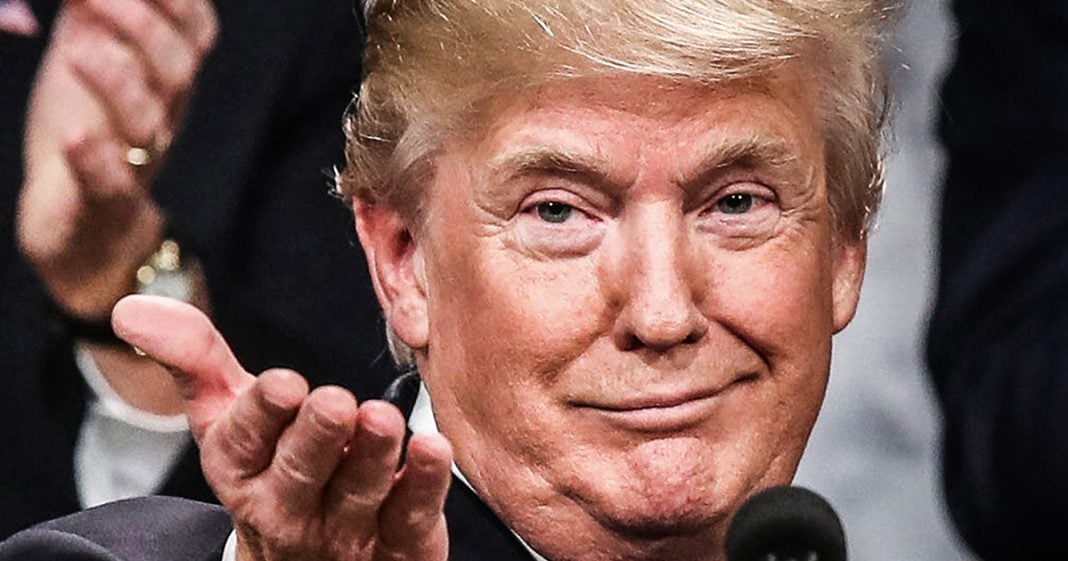 Donald Trump took the time on Sunday to use his official Twitter account to promote his golf courses in the UK, going as far as telling us that his golf courses are helping with political relations between the companies. The President is actively promoting his businesses that he still profits from in his official capacity as the Commander In Chief, and that is a very clear violation of the law. Ring of Fire’s Farron Cousins discusses this.

The entire office of the president of the United States since Donald Trump was sworn in has become nothing more than a massive infomercial for the entire Trump Organization. It, if you need any proof than, let’s just look at Sunday when Donald Trump tweeted out that his golf courses in Scotland are somehow helping to further relationships with the United Kingdom because of his golf courses, which he also said in the tweet, we’re amongst the most beautiful in the world. It is those golf courses that are helping to strengthen relations between the United States and the UK. If those didn’t exist, God only knows what kind of wars we’d be having right now with Scotland. But it’s Donald Trump, the peacemaker, the Golfer, the entrepreneur who’s keeping us all safe and wonderful and happy by giving Scottish folks a place to go play golf.

Yeah, that’s an advertisement by the way. And that is 100% illegal. And that is actually the kind of thing that, uh, groups like citizens for responsibility and ethics in Washington are suing the president over because he is using his official position, his official platform, which is Twitter, to advertise these properties, which is 100% illegal. Now, here’s another part of the equation here that Trump needs people to understand, is that actually the folks in Scotland hate his golf courses. They’ve been attacked since they were under construction. They’ve destroyed precious environmental areas. They hate them. They’re gone either ugly, they’re overpriced. The Scottish people don’t like them. So you’re actually technically making things worse with the UK by putting these horrendous golf courses over there. But really that’s beside the point. Let’s focus more on the illegality of what you are doing.

He allegedly has divested, but he still gets the profits from the companies. This isn’t good enough. Nothing short of Donald Trump’s selling off his entire interest in the Trump Organization is acceptable at this point. He needs to make the choice right now, money or presidency, because you can’t have both. He should be forced to sell off his entire company so that when he leaves office, it’s no longer, therefore, I’m sure he’ll have all the money he had made to this point minus whatever he had made since he became president of the United States. That should be taken away and then beyond that, those companies are no longer his. He’s gone. He is done. Nothing short of that is acceptable at this point because I am sick and tired, as are so many millions of Americans of watching the White House turn into a giant Trump Organization infomercial.