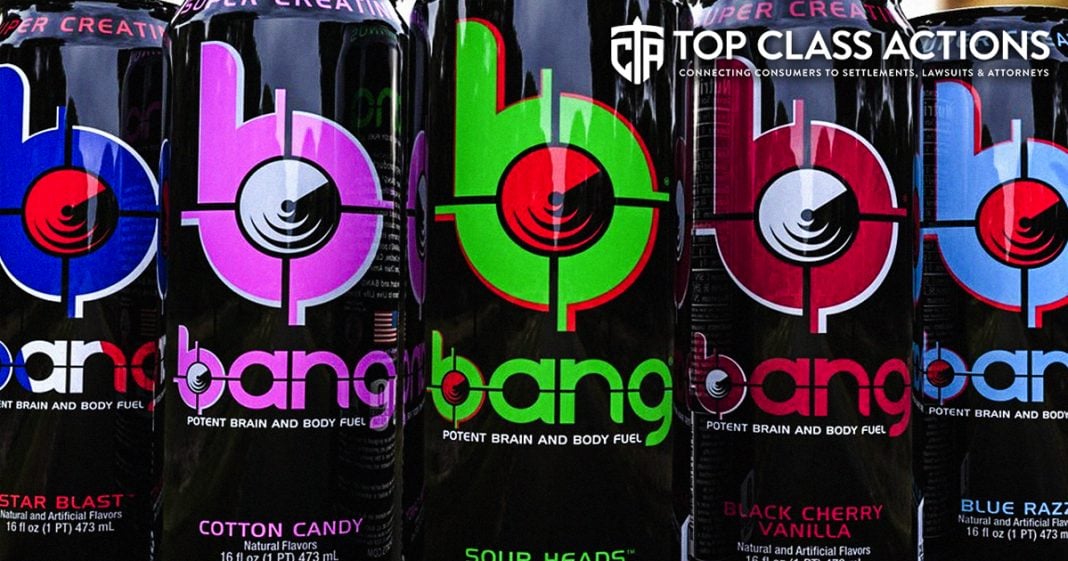 BANG energy drinks don’t contain sufficient amounts of its so-called “brain & body-rocking fuel” to make a difference for consumers, according to a class action lawsuit. The lead plaintiffs allege in their class action lawsuit that Vital Pharmaceuticals misrepresents the ingredients of BANG, luring consumers into purchasing the product that fails to deliver the promised benefits. Ring of Fire’s Farron Cousins discusses this with Scott Hardy from Top Class Actions.

Farron Cousins:                  Energy drinks over the last 15 to 20 years have become one of the most popular beverages here in the United States. It’s easier for somebody to pop open an energy drink, then perhaps brew a pot of coffee. Often times cheaper than going to the store and buying a cup of coffee. And as a lot of these energy drinks claim, they’ve got more benefits, more nutrients, more things that help fuel your body. Or do they?

Joining me now to talk about this as Scott Hardy from topclassactions.com. Scott, you’ve got a great piece up on Top Class Actions right now about bang energy drinks and a class action lawsuit against the makers of bang energy drinks. Tell us what’s happening with, with this one.

You know these, these young kids are sucking it down, trying to go ahead and stay amped up throughout boot camp. And so it makes sense that it’s sold as body rocking fuel. And on the label it says that contains creatine, bcaa’s, CoQ10 and that’s on the rim and that’s on the nutritional label. But according to the class action lawsuit, there’s really not much of that actually in the can itself. And that’s what this class action alleges.

Farron Cousins:                  You know, the, the CoQ10, which you, you hear on commercials for vitamins. They typically refer to it as the CoQ10. CoQ10, that little phrase. But they always market that as something, this is really good for your body. You, you totally need this. You’ve got to have it. It’s in a lot of supplements. And so the energy drink maker’s say, you know what, let’s, let’s start putting some of this in our drinks. Let’s put some creatine in there because anybody who has ever spent time in a gym has probably heard somebody talk about creatine and they know that, oh, maybe this is going to help us grow muscles.

And it’s not, you know, some of these things may actually be in these energy drinks, but, but what these, these suits are alleging is that they’re in, they’re in such minuscule amounts as to be statistically insignificant. So even if they’re there, they wouldn’t even be present in large enough quantities to do anything of benefit for the body.

Scott Hardy:                          Exactly. As anyone who has gone to the gym and used creatine powder as a workout supplement, obviously you can tell I did way back in the day. No, you can’t tell that, but that takes a lot of creatine powder. When you’re not just drinking, not just putting a little teaspoon in there. You’re putting a lot of stuff in there to go ahead and get any benefits of trying to use something like creatine. And as you said, this class action alleges that maybe there are trace amounts of CoQ10 or bcaa’s, or creatine in there, but the amount is so minuscule and there’s so little of it in there that it’s, it’s, it doesn’t actually matter.

It doesn’t actually contribute to your health. It doesn’t make you stronger, bigger, faster. It’s just in there. Just enough possibly. So they can put on the label. But this class action is saying, there’s not even enough of that in there. So we’ll see what happens with bang energy. If they, maybe as we talked about with other class actions, maybe they’ll say flavored by creatine and CoQ10, I don’t know. But they shouldn’t be claiming these health benefits when whatever amount they may or may not have in the can doesn’t actually help you one bit.

But it’s got the sugar and according to, you know, the labels, it’s got all of these extra crazy things. And some of the crazy things or additional things or nutrients or whatever are different from brand to brand. But if your brand is just the same as this other brand, how are you going to stand out? And that that’s, that’s where the companies make these bad decisions. You know, let’s add trace amounts of creatine or you know, the bcaa’s and then we can market it as that. And that’s going to set us apart. And that may also mean we can, we can charge a few cents more per can than our competition.

Scott Hardy:                          Exactly, and I think with some of the recent studies that have come out regarding diet drinks and diet sodas and how if you’re drinking more than two diet sodas a day, you might be having problems with the increased chance of heart attack and other issues that people are trying to move over to what they think will give them a caffeine burst with some possible health benefits connected to it, when in fact that might not be the case at all.

Farron Cousins:                  Absolutely. If anybody needs any more information about this issue, you can follow the link in the description of this video. Go to topclassactions.com and subscribe to their newsletter. It is one of the best resources available to consumers to stay on top of all the issues that actually matter in our lives. Scott Hardy, topclassactions.com, thank you very much for talking with us.