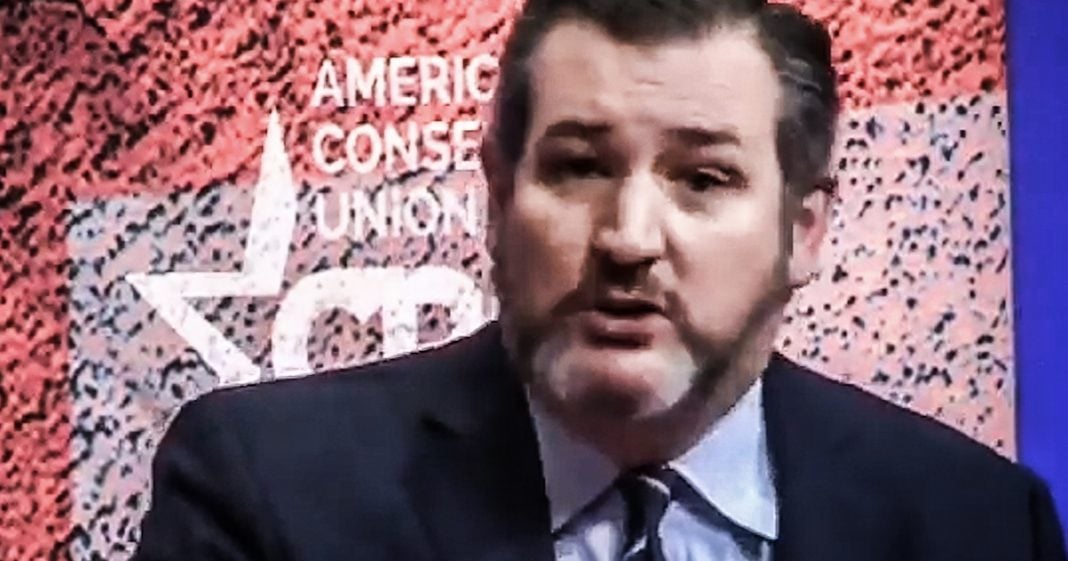 During his speech at CPAC last week, Ted Cruz claimed that Democrats have gone “bat crap crazy” because of their hatred of Donald Trump. Cruz needs to look into the mirror when he makes accusations like that, as it is actually his party that has shrugged off the veil of sanity in order to support someone like Trump. Ring of Fire’s Farron Cousins explains.

Republican Senator Ted Cruz thinks that Democrats have gone insane. And he said as much during his Friday speech at the CPAC conference that went on over the last few days. Uh, in fact, Ted Cruz doesn’t just think Democrats are insane. He actually called them bat crap. Crazy. The exact quote from Ted Cruz is as follows. I think there’s a technical description of what’s going on. It’s that Democrats have gone bat crap crazy. Now, Ted Cruz was referring to the fact that Democrats do not want to shell out billions of dollars for Donald Trump’s worthless, needless and useless border wall. And that makes Ted Cruz very angry. And he thinks the Democrats because they don’t want to waste $6 billion our bat. Crap. Crazy. Well, you know, ted, if you ask me, you want to know what I think is bat crap crazy. And I’m sure many members of your own family would agree with me here. Um, bat crap crazy would be bowing down before a man who literally insulted your entire family tree.

Uh, he called your wife very unattractive attack, a tact her appearance, um, implied that your father was somehow involved in the JFK assassination and repeatedly mocked you, berated you, and attacked you during the Republican primary and not just in the way that other Republicans attack each other when they’re trying to run for the same office. You know, I just agree on this policy. He’s bad on this. No, he was personally attacking you, your wife, your father, and any other member of your family that he could to me bowing down before this man and blindly supporting everything he does that his bat crap crazy. And I’m sure that your wife would probably agree with that. I’m sure she probably is not too happy that you refuse to stand up to Donald Trump when he was attacking her, when he was attacking your father, when he was attacking you.

You have become one of the most disgusting Donald Trump’s suck ups sitting in the u s Senate today. This man absolutely verbally destroyed your family. And how do you get back at him by doing everything he wants you to do? You know that pathetic picture of you sitting in a phone call center calling people on behalf of Donald Trump tells us everything we need to know about your character. And that is that you have none. You have no integrity. All you care about is furthering your career and you don’t care who’s wagging. You have to hit yourself too. In order to further that career, everybody notices and everybody knows what’s going on with you. And in reality, the only people that have gone back crap, crazy are the people who still think that you are a decent senator.