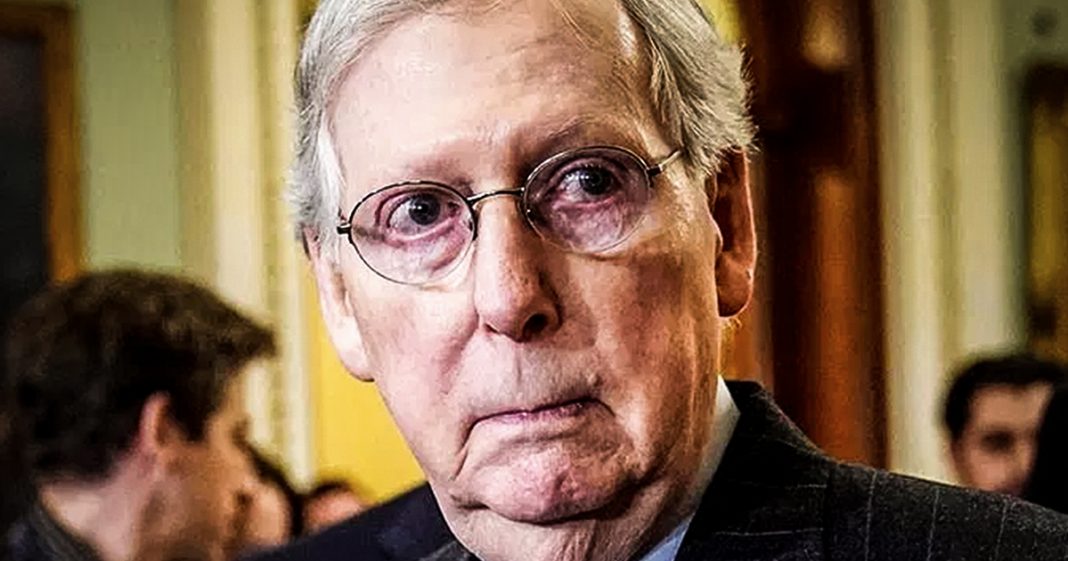 During a speech on the Senate floor this week, Senate Majority Leader Mitch McConnell finally addressed the massive voter fraud that Republicans engaged in in a North Carolina House race. But during his speech, he didn’t blame the Republicans who carried out the scheme, he instead said that the entire fraud scheme was the fault of the DEMOCRATS who won’t let Republicans enact voter ID laws. Ring of Fire’s Farron Cousins explains why this is an absolutely insane claim to make.

In case you haven’t been following along with what’s happened in North Carolina is ninth district. Let me go ahead and give you the quick rundown. We’ve explained it in the past, but things have developed a little bit. Uh, Mark Harris, the Republican candidate hired a man by the name of Leslie McCrae, Dallas. Uh, even though Harris’s team said, hey, don’t hire Dallas, this guy as corrupt as hell and he’s a fraud and he’s going to do something illegal. Uh, including Harris, his own son, warned them about that. But Mark Harrison, no, I’m going to hire this guy. He seems good at his job. And then it turns out that to Dallas was actually gathering up absentee ballots and if the person hadn’t voted for a member of Congress, they went ahead and just filled in Mark Harris’s name. And if they voted for somebody else, they just threw those ballots away and never turned them in.

It was an illegal ballot scheme, catching, destroying, altering, and manipulating. And Dallas is likely going to prison for an exceptionally long time. At this point, we’re still not a hundred percent sure whether or not Mark Harris, the Republican know about this, but signs are inching closer to its. Seems like Mark Harris knew that this was happening. A new election has been called for and unfortunately Harris is being allowed to run in it. So why am I telling you this story that you could read anywhere? Well, it’s because of this. Mitch McConnell on Thursday of this past week decided he was going to finally address this issue on the floor of the Senate and he did. They said, yeah, there’s this fraud scheme and it looks like the fraud benefited the Republicans and not the Democrats, but Mitch McConnell says, I can’t help but feel like Democrats are to blame for this. And Mitch McConnell went on to say the following here.

He said, for years and years, every Republican who dared to call for common sense safeguards for American’s ballots was demonized by Democrats and their allies. We were hit with left wing talking points insisting that voter fraud wasn’t real, never happens. They said that fraud just didn’t happen. That modest efforts to ensure that voters are who they say they are and are voting in a proper place. We’re really some sinister right wing plot to prevent people from voting. So Mitch McConnell thinks that the voting fraud, which is not even what he just described in that thing, carried out by Republicans with a Republican operative and Republican volunteers to benefit. He admits the Republican Party is somehow the fault of the Democrats because they wouldn’t let Republicans enact their repressive and racist voter id laws, which for the record would not have solved this situation in any way. It literally would have done nothing to change what Dallas and Harris engaged in, but Mitch McConnell doesn’t want to admit that the only real voter fraud in this country has been perpetrated by Republicans.

It’s so he needs somebody to blame and he’s going for the Democrats. I don’t know that there is anyone stupid enough in this country to actually believe what Mitch McConnell has to say at this point. It was carried out by the Republicans for the Republicans and of Republicans. They wanted to do this, and there isn’t a single republican proposed voter measure in the last hundred years that would have prevented this from happening. You have to own this, Mitch, this was your party. This was your fault, and nothing that the Democrats did or didn’t do could have stopped these corrupt as hell. Republicans from engaging in one of the most massive voter fraud schemes that this country has seen in a generation.