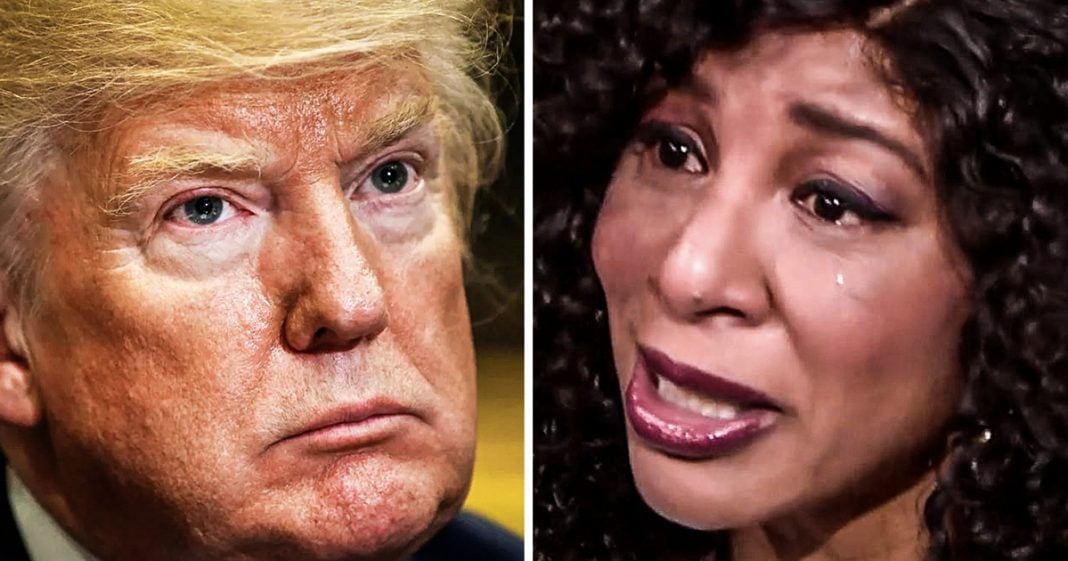 A former Trump 2016 campaign staffer named Alva Johnson has come forward saying that the President forcibly kissed her while she was working on his campaign. The alleged assault took place more than a month before the infamous Access Hollywood tape was leaked, which actually allowed us to hear Trump saying that he likes to do exactly what he’s been accused of doing. 23 women have now accused the President of sexual misconduct, and yet the media is completely ignoring these stories. Ring of Fire’s Farron Cousins discusses this.

There is no reason right now why the name Alva Johnson is not the most talked about name in the United States of America. Most of you probably have not heard of Alva Johnson, but let me go ahead and tell you who she is. She is the woman who came forward recently within the last two weeks telling us the Donald Trump sexually assaulted her while she was working on his campaign in Florida in August of 2016 according to Ms. Johnson, Donald Trump came up to her after an event, forcibly kissed her and groped her. She didn’t want it. She didn’t want to be a part of that and yet Trump did it anyway, which actually sounds a lot like what he said he likes to do in that leak, that Access Hollywood tape. Of course, this event actually took place six weeks, I believe, before that Access Hollywood tape was even released. Alva Johnson story is getting buried right now in the press.

Nobody’s talking about it. Maybe they feel like it’s not credible. Maybe they feel like her story sounds a little too similar to what Donald Trump described doing in that Access Hollywood tape. And she fabricated it based on those statements, which honestly entirely a possibility I guess. But it could be the other way around. It could be that when Donald Trump was on that Access Hollywood tape, he was recalling what he likes to do and that’s his standard operating procedure. So for Alva Johnson, she just experienced with Trump had said a couple of years ago is how he does things, whatever way it is. Alva Johnson at least deserves to be heard. Her and the 22 other women who have come forward in the last few years saying that Donald Trump in some way behaved sexually inappropriate with them from full on assault, like in Alva Johnson’s case to a more simple just sexual harassment of them. Either way, Alva Johnson deserves to be heard out.

She has filed a lawsuit, which has great the 22 other women who have accused Donald Trump deserve to be heard and this, this story needs to be told and needs to be discussed by everybody. We have never seen a president of the United States accused by at least 23 women have some kind of sexually inappropriate behavior. And yet it just gets swept under the rug. Like it’s just another day. You know, it’s like a traffic report. Like I as a lot of cars out there today, this kind of sucks. Oh well moving on. No, the president of the United States who have been, has been credibly accused by 23 women and we’re not talking about it. And as far as we can tell, we’re not doing anything about it. You know, the Democrats, when they came into the House of Representatives after they got their majority in the midterms, uh, they said they’re going to launch a lot of investigations and they have, but this is one that needs to be investigated.

Bring these women before Congress, do it behind closed doors if you have too, but meet with them and talk to them and get their stories and launch investigations. This is disgusting and inappropriate behavior from the president. And more and more women keep coming forward saying that it happened to them too. We believe the stories that come out when it’s about a celebrity or an athlete or anyone else, any other politician, but when it’s Donald Trump, not a big deal. We know he’s a scumbag. Sure. Why not? This has to be taken seriously, not just because he is the president of the United States, but because these women that he is allegedly done this too. They deserve justice and we’re denying them that right now.