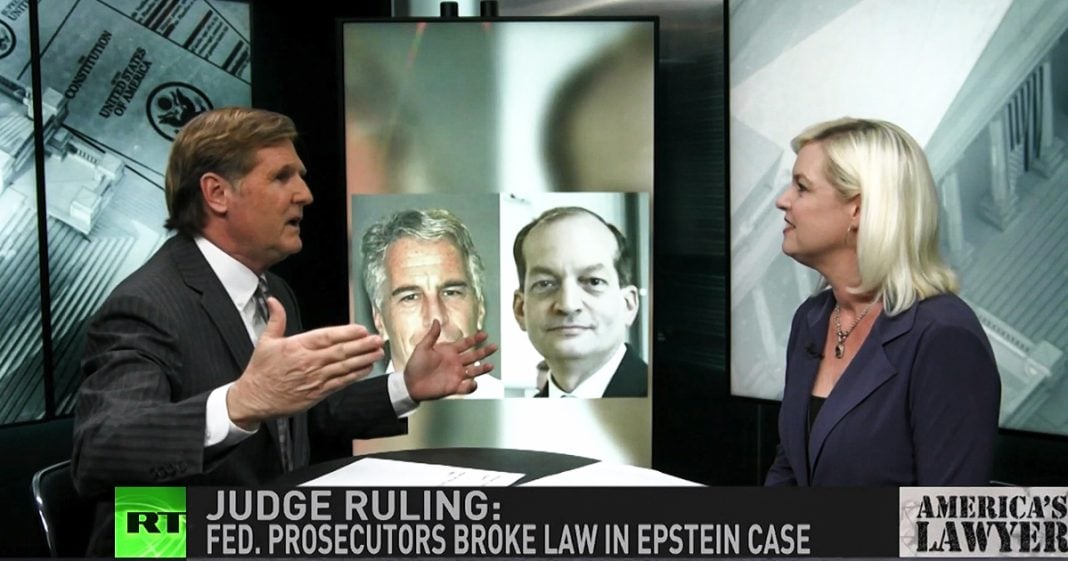 Mike Papantonio:             Federal prosecutors gave multimillionaire and registered, registered sex offender, Jeff Epstein, a lenient plea deal and kept it hidden from his underage victims. Now some are calling for a new prosecution of Epstein as well as an investigation. And this is the, this is the important part. And investigation into the former US attorney, Alex Acosta.

Mollye Barrows, legal journalist, writer for trial lawyer magazine. You know, this is right up your alley. These are the kind of stories that you covered when you were doing anchor in, in the news. This one is so disgusting, I think because we allowed government to make it happen. Not to let it happen, but to make it happen. What’s your take?

Mollye Barrows:                Yes, it’s a secret deal. It’s a sweetheart deal. They protected a registered sex offender from his own crimes and protected him like he was the victim. And what’s even worse, and I’ve heard this so many times, is they treat the victims, the one who come forward, the ones who come forward with their stories, like they are the ones that are the problem. We don’t want to hear from you. And that’s to me what this story says.

The secret deal with hidden from them and the judge agreed, the federal judge who heard this said they broke the law. That Acosta as well as the prosecutors that worked out the deal with Epstein’s attorneys, Jeffrey Epstein’s attorneys, that they broke the law by doing that, by hiding the plea deal and then sealing it so that nobody could see his full list of accomplices, accomplices. Could see what he was really do, the full extent of his crimes.

Mike Papantonio:             Well, the name look, first of all, let’s be clear what happened here. They had, they had all the evidence they needed. They had the guy dead to rights and they said, oh, Mr. Epstein, you have all these political contacts. You have contacts with, with Bill Clinton. You fly back and forth to the islands with Bill Clinton. You have Donald Trump in your close, you know, little black book. You have Alan Dershowitz. You have the prince of England. I mean the, the…

Mike Papantonio:             Prince Andrew. You have all of these people in your close circle. Oh and by the way, you give a lot of money, a lot of money, primarily to Democrats. That, that was a big part and everybody seems to be, the guy’s a multi-gazillionaire. And so, so they catch him and here’s the punishment. He has to go to jail. He can come and go as he wants. He has to I think stay, he has to spend a few hours there every day. This is after they caught him with underage kids, basically raping under age kids.

Mollye Barrows:                Child rapist. You’re talking over a hundred suspected victims and 30 of them were part of this original plea deal and they were sealed from even seeing the extent of his crimes. Seeing who his accomplices were. And so that was part of the travesty that the judge said, but he didn’t go as far as to say he was like bad, bad prosecutors, but he didn’t say, let’s reopen this prosecution.

He basically told the attorneys of the victims to get together and come up with, you know, what, what sort of settlement that they would want. But these victims have not asked for damages or money. So in some ways as many sexual assault victims as I’ve talked to that might be helpful and healing in some ways, but what they really want is accountability. And I think he needs to be re-prosecuted.

Mike Papantonio:             Let me tell you what’s interesting about this case, the lawyers that handled this are friends of mine. They, they had, this was not about money at all. They didn’t get paid a dime to do this. They got, it was about, they looked at this, these kids came and they said, this is what Alan Dershowitz and Roy Black and this Acosta, this is what they worked out. They kept it secret from us. Is that right? Well Florida is very clear on the idea, they have a duty to tell the victims what happened in the, in the, in the deal. In the prosecution deal.

Mollye Barrows:                Right, so they have an opportunity to express their feelings on it and it was deliberately kept from them so that they wouldn’t go and protest this sweetheart deal and then he could go ahead and get away with that slap on the wrist that you just described when they know, and the judge even said, there is plenty of evidence to show that this man, including his accomplices, was involved in an international sex trafficking ring. They were bringing in underage girls from all over the world.

Mike Papantonio:             But The new girls, per head, I will pay you $200 per girl that comes here and this was going on. They’re flying back and forth to the islands. When you look at the who’s who lists, there’s a really interesting part about this that’s kind of gotten lost. That is the pilot who did the flying back and forth to this paradise island. He named the names buddy. I mean he just said this person was there, this person was there and it was like a who’s who of politics. Interesting thing, Acosta is now working for the Trump administration.

Mollye Barrows:                Yes, as the secretary of labor and the DOJ is investigating his, his role in this because he was the US attorney for the district of my, in Miami at the time. So of course he needed to, they have evidence that shows, he was personally involved in some of these negotiations, whether it was emails or overseeing this deal that was essentially made and you’re a hundred percent ride.

They all went into it knowingly and willingly. Even Kenneth Starr who prosecuted Bill Clinton for his sexcapades in the Oval Office wanted to impeach him for consensual sex between two adults. Whether or not you agree she, Monica Lewinsky defense.

Mollye Barrows:                Yeah. Now he’s defending this guy for basically sexually, being a child rapist and wanting to hide it from the victim. So like you said, it is an undermining thing to, what our government is capable of and if they would do this to all these hundreds of underage girls, just the 30 that were impacted by this plea deal, that’s not all the victims that were out there.

Mike Papantonio:             Brigida Santos and I did this story to begin with. We’re going to keep doing updates like we just did. Thank you for joining me. Okay.