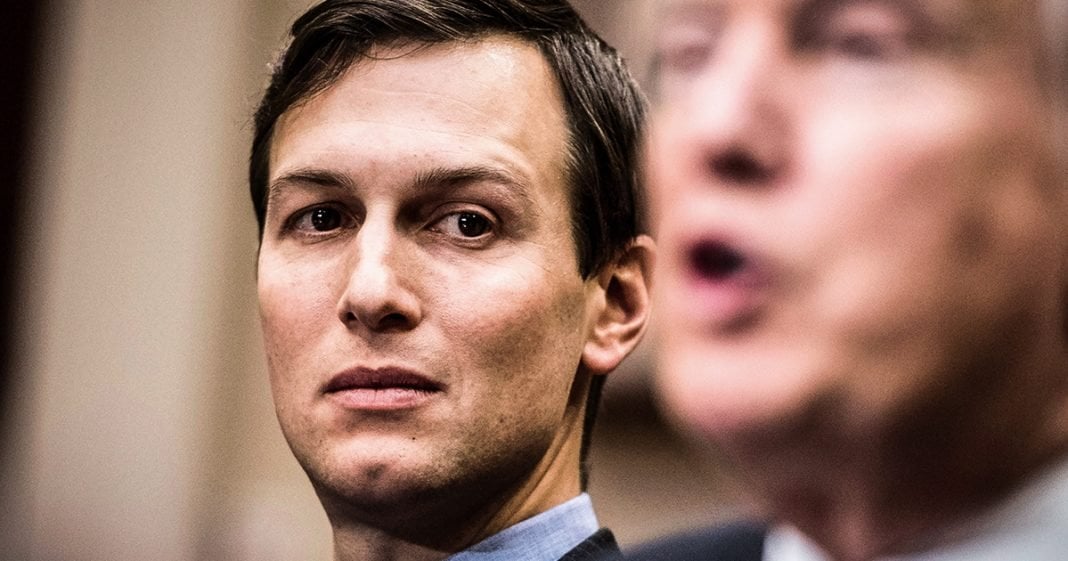 Thanks to an uncovered internal memo written by former White House Chief of Staff John Kelly, we now know that Donald Trump is the one who ordered his administration to grant his son-in-law Jared Kushner a full security clearance, even though the intelligence community thought this was a very stupid idea. Between his inability to tell the truth and his shady connections to foreign parties, members of the committee overseeing security clearances did not think Kushner could be trusted, but Trump overruled them. Ring of Fire’s Farron Cousins explains what this means.

In a bombshell new story this week. It was revealed that Donald Trump personally ordered members of his staff to get Jared Kushner a full security clearance even though multiple intelligence agencies, both the CIA and the FBI had previously told the White House counsel that there is no way this guy Jared Kushner, the son in law of Donald Trump should be granted a full security clearance to have unfettered access to top secret and classified information. Basically they’re telling us the Jared Kushner cannot be trusted with the secrets of the United States. They were worried about his contacts with foreign governments, with foreign leaders, with foreign actors, not actors in the Hollywood sense, but people acting on behalf of foreign governments. They are worried about his connections to the United Arab Emirates. They were worried about his, you know, relationship real estate wise with other people over there in the Middle East and they didn’t think it was smart to give this guy a security clearance and they were 100% right.

They’re also worried about the fact that the guy had to amend his financial disclosure thing a dozens of times because he just couldn’t get it right. He kept forgetting, oh, oops, I forgot I spoke to this person on foreign soil and told them things. Oops, I forgot I had a business deal with this guy. Oops, I forgot. I’ve traveled to this country a lot and discussed real estate holdings. Oops. And now we learned that the only reason this moron, Jared Kushner has a full security clearance is because Donald Trump ordered John Kelly, his then chief of staff to make it happen. And Kelly was so furious and concerned about this, that he wrote a memo to the staff and internal memo explaining to them that Donald Trump is the one who ordered this. And we know that this week because that memo has been released and at the same time that this memo came out and we learned that Jared Kushner should not qualify for a security clearance.

He was also meeting with the Mohammed bin Salman, the crown prince of Saudi Arabia at the time when this happened. So He’s meeting with foreign leaders who we know, uh, ordered the murder of a journalist not that long ago, but this administration says, Nah, I believe, and they didn’t do it. They’re good guys. You’re just a bone saw accident happens all the time. This is a guy Jared Kushner is meeting with. This is a country the Jared Kushner wants sweetheart real estate deals in, and Jared Kushner is now a guy against everybody else’s wishes other than Donald Trump who has access to every secret that United States has ever had. Don’t you see a problem with that? The FBI didn’t trust him. The CIA didn’t trust him then White House counsel, Don McGahn didn’t trust him. John Kelly didn’t trust him. None of them believe that this guy could keep his stupid little mouth shut to be trusted with American secrets.

But Trump said, I don’t care. Get him this security clearance or else John Kelly is not a victim here though, you know his little memo saying, Trump’s ordering me to do this. You could’ve walked away, bud. You could’ve just left. You could have told the media exactly what was happening back in May of 2018 but instead you just did it. You’re not walking away from this scott-free buddy. You have destroyed your reputation, a reputation, and you do not deserve any sympathy. For many of us. I know you did a lot of things you were uncomfortable with while you were Trump’s chief of staff, including this Kushner thing, but she’s still did them. That was your choice at any point in that administration, you could have walked away, but instead you decided to continue to tarnish. Your reputation, destroyed everything you had worked for in your life, and now this is how you were going to be remembered for all of eternity. And it’s exactly what you deserve considering what you did for Trump.