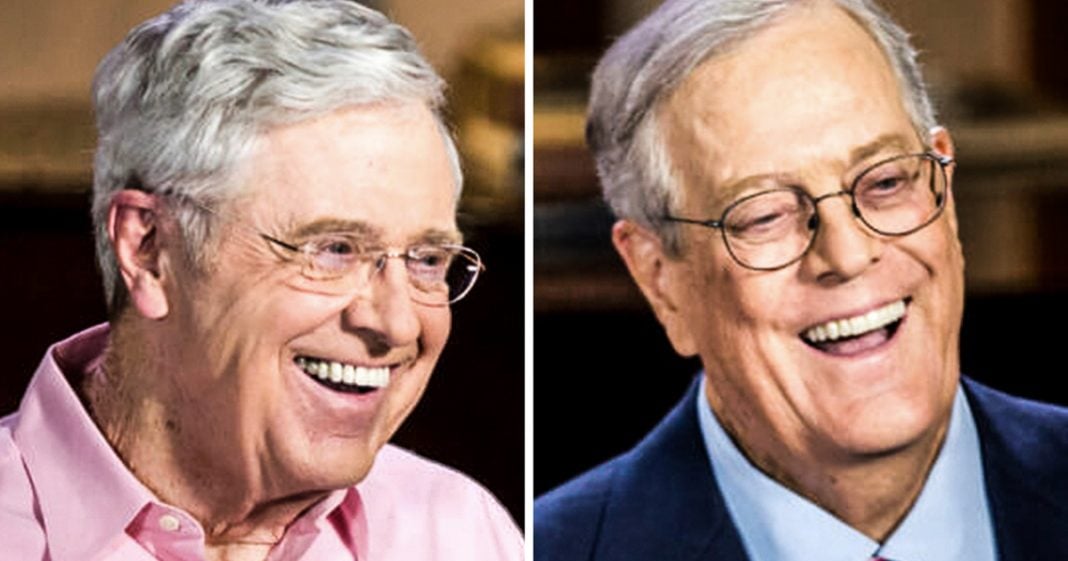 The Koch brothers have been revealed to be one of the major funders of a textbook that is being used in poor community schools that is not only filled with blatant lies, but it strictly tells students that the libertarian vision of free markets and no government is the only system that can work. Through their network of organizations and with the help of other wealthy donors, the Kochs have managed to push this false textbook onto countless lower income students across the country. Ring of Fire’s Farron Cousins discusses this.

Ethics, economy and entrepreneurship is the name of a textbook that, that most people in this country I’ve never heard of. In fact, you would have to be in a really kind of destitute school district that has no money whatsoever to have ever even seen this textbook, which is not accredited. There’s no bibliography, there’s no footnotes, there’s no sources listed in any of it, but this is a textbook nonetheless that is being pushed on poor school districts, particularly right now in Arizona by the Koch brothers and their affiliated networks. And here’s the thing about this textbook. It is filled with lies and libertarian economic principles, which also happened to be lies by the way. Um, this book is being given out to a school districts for high school students for free. And here’s how this little scam works. Let me talk about the scan before I talk about how crappy the book is.

In several areas of Arizona, the Koch brothers starting in 2009 began lobbying to cut funding for their school districts. And the Koch brothers somehow prevailed. People hopped on board and said, hell yeah, we don’t need money for schools. So then you end up with cash strapped schools that can’t afford textbooks. So then the Koch brothers and their networks and their little members come, came forward and said, we’ve got a free textbook for you, use this and you won’t have to spend any money. And here is what this textbook claims. Uh, their section on trade began 40,000 years ago with the claim that the neanderthals became extinct because they weren’t entrepreneurs. So 40,000 years ago we had a bunch of neanderthals, essentially cavemen walking around and because they weren’t opening small businesses, they became extinct. That is literally in the textbook by the way. Um, further nonsense included the idea that Jamestown failed because the settlers didn’t have private property rights, that American bison almost became extinct because because native Americans drove them off cliffs.

Uh, zero evidence to even suggest that ever came close to happening and that towns were founded in the United States before agriculture. So before we were even growing, things are new. If an area was fertile enough to sustain a population, we just created a population there because screw it, we’re Americans and we’re libertarians. This book is, is pure nonsense. It’s pure insanity. And it is funded by groups associated with the Koch brothers. And they laid the framework in the state of Arizona to force this textbook on to students. And this is what the Koch brothers have been trying to do all over the country, not just in high schools, but also at colleges. Koch brothers have been buying up influence at colleges, school boards all across the country to push their braindead libertarian principles. Libertarianism, much like communism doesn’t work in practice, just like trickle down economics.

The free market cannot exist without some kind of controlling force. And that controlling force has to come from the government. We have seen what corporations do when left to their own devices with no regulation whatsoever and knitted z disaster for American consumers. Yet that is what the Koch brothers won every one of us to engage in. And the poorer you are, the more likely they think you are to buy into their backwards libertarian principles that everybody is just a millionaire waiting to happen. All you gotta do is start a small business. Oh, and by the way, while you’re added, kill the federal government too.