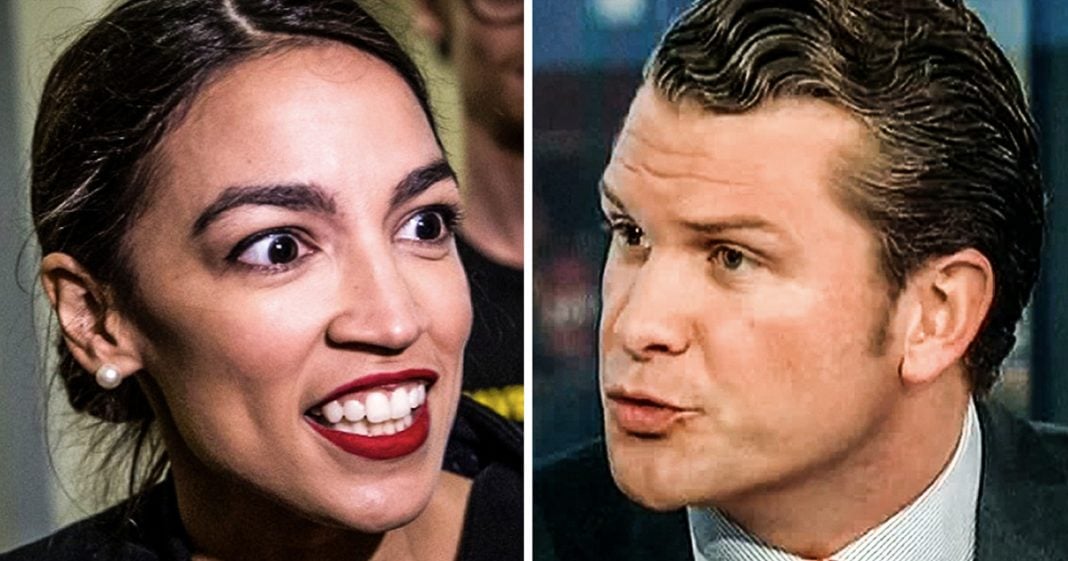 Fox News is not happy about the fact that Representative Alexandria Ocasio-Cortez is paying her staffers enough money so that they can actually live a decent life. They lashed out at the new rep, calling this a communist and socialist plot. Why is Fox News so afraid of poor people getting more money? What do they stand to lose if people make their way out of poverty? Ring of Fire’s Farron Cousins attempts to answer those questions.

This past weekend. Fox News specifically host Pete Hegseth on Fox and friends. I believe he is the guy who said he hasn’t washed his hands in 10 years. Uh, but he got super pissed off when he learned that representative Alexandria Ocasio-Cortez is going to be paying her staff members in DC, a living wage. Hegseth said it’s actually socialism and communism on display and he said this in response to the news that Ocasio-Cortez is going to be paying or staffers $52,000 a year. Her interns, rather than being unpaid, they’re going to make $15 per hour and according to Hegseth, the folks at Fox News, this is both socialism and communism because they have no idea what either of those two words actually means. They just like to throw them out because they know that their viewers are very dumb and they’re going to eat those up like socialism and communism. Oh my God, let’s hope there’s not a fascism in there too because then that’s all of the isms that we have been trained to hate, even though none of us know what any of them mean.

And that’s what Fox News is banking on. Here’s the truth, and I’ve said this in the past, uh, what AOC is doing here is 100% necessary. DC is not a very cheap place to live. Not to mention the fact that these staffers are the ones who keep these members of Congress going. They’re the ones pulling research. They’re the ones writing draft reports, they’re the ones making charts and graphs and all the things that make everybody looks super smart when they’re on the floor given their speeches. Those are staffers doing that and AOC understands that. She also understands what it’s like to come from not having anything. It’s struggling to get by and she doesn’t want her staffers to have to go through the same crap. And that’s why we need more people like that in Washington DC and in the business world in general, people who have struggled, people who know what it’s like to not have enough because they’re the ones most likely to take care of those working for them and AOC is admitted.

They have to pinch pennies elsewhere because she’s giving more money to our staff because each member of Congress has given a set budget. It’s all the same, every member, and it is out of that budget that you used to pay for your travel, use it to pay your staff salaries, use it to pay for everything else that you need. So if you spend more on staff salaries, you have to spend less, uh, less elsewhere. But she is more than willing to do that if it means taking care of the people who are working for her and helping her during her time in office. We need more of that in DC. We don’t need to be freaking out like Fox News and saying it’s socialism and communism. What we need to be doing is saying, hell yeah. Finally, there’s a member of Congress who understands and remembers what it’s like to be a struggling American citizen and they’re doing everything that they can to make sure that people working for them don’t go through the same hell that they have personally been through.