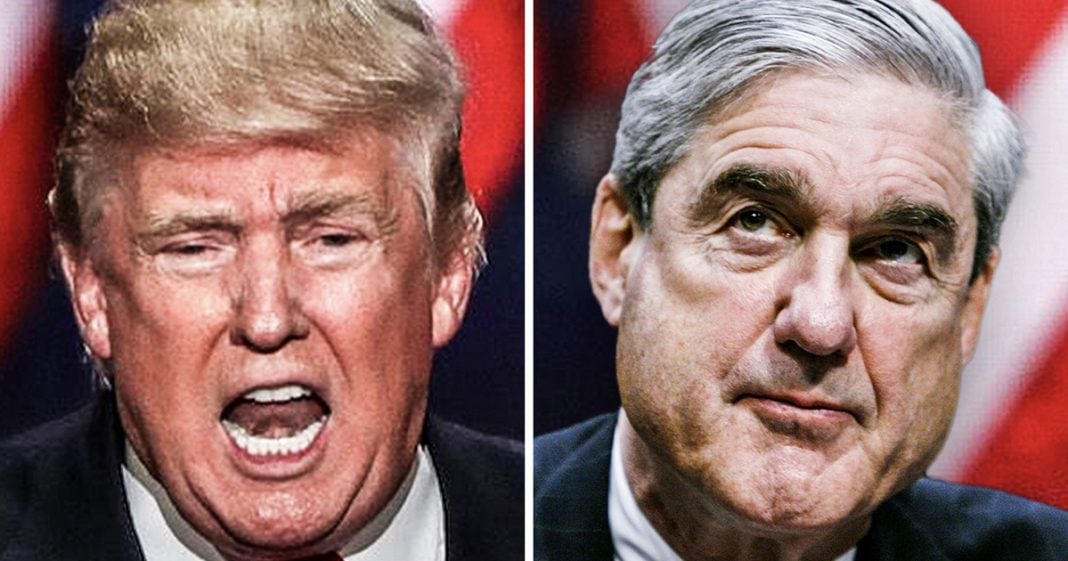 Donald Trump is back from his failed trip to negotiate with North Korea, and he’s taking his anger out on Democrats and the Mueller investigation. On Friday morning, Trump lashed out and said that it was time for the Mueller investigation to come to a close immediately. “Must end now” were his exact words. Ring of Fire’s Farron Cousins explains why Donald Trump is freaking out so hard, and it isn’t just because of Cohen’s testimony.

Well folks, Donald Trump is back from his failed trip to Vietnam to a negotiate some kind of peace deal with North Korean dictator Kim Jong Un, who he described as a great guy. His really likes me. He’s a good guy, Trump says. But nonetheless, he failed when it came to getting a deal. So obviously Donald Trump is pissed off because he came home. Everybody’s talking about what a failure he was and how he’s obviously lied about being a master negotiator. So he decided to take out his anger on Robert Mueller and the special prosecutor’s investigation. He’s pissed about Michael Cohen and his testimony and his exposure of all of the financial crimes that Trump could be connected to. So he’s lashing out and he’s doing exactly what we thought he would eventually do. And he is calling for an end to the investigations in a two part tweet. Here is what Donald Trump had to say.

Oh, I see now that the two year Russian collusion case has fallen apart. There was no collusion except by Crooked Hillary and the Democrats, they say, Gee, I have an idea. Let’s look at Trump’s finances. And every deal he’s ever done. Let’s follow discredited Michael Cohen and the fraudulent and dishonest statements he made on Wednesday. No Way. It’s time to stop this corrupt and illegally brought witch hunt time to start looking at the other side were real crimes were committed. Republicans had been abused, abused, long enough must in now. Now that last little phrase there must in now is the one that is very worrisome because this indicates that Donald Trump is ready to pull the trigger and get rid of these investigations or fire the people, overseeing them in an attempt to cripple them. And here’s the thing that Trump needs to understand, and he does understand this, but he wants to throw meat to his base.

The Democrats had been investigated to hell and back you guys after years and years and years and years and dozens of hearings, 33 on Bengazi alone, you couldn’t find anything to convict a Democrat on nothing. You came away with nothing. You literally wasted years and couldn’t do anything. Much more time spent on those investigations than molar has been on the job. And 33 Bengazi hearings versus one Michael Cohen hearing. I think I know which parties being persecuted here and I don’t think it’s Republicans at all, but sure. Go ahead and tell your base that we’ve got to investigate these alleged democratic crimes that most people don’t believe ever happened. All to deflect the attention away from yourself because you failed to get something done in North Korea, yet you still gave away the farm by telling them we’re not going to, uh, require you to report how many nukes you have anymore.

You gave that away and then you walked away. You’re an idiot and you put us all in greater danger because of it. You’re pissed off that Michael Cohen kept the receipts and he was able to show that you and your son and your CFO, Allen Weisselberg, we’re all personally connected to this financial fraud scheme. You know that the southern district of New York has this information and that they’ve been digging for quite some time in an investigation that most people aren’t paying attention to, but they should be Andrew mad that all your buddies are going to jail. That’s what you’re pissed off about. You don’t actually think the Democrats committed any crimes. You’re just trying to deflect the attention away from all of the crimes. We now know that you are implicated in.