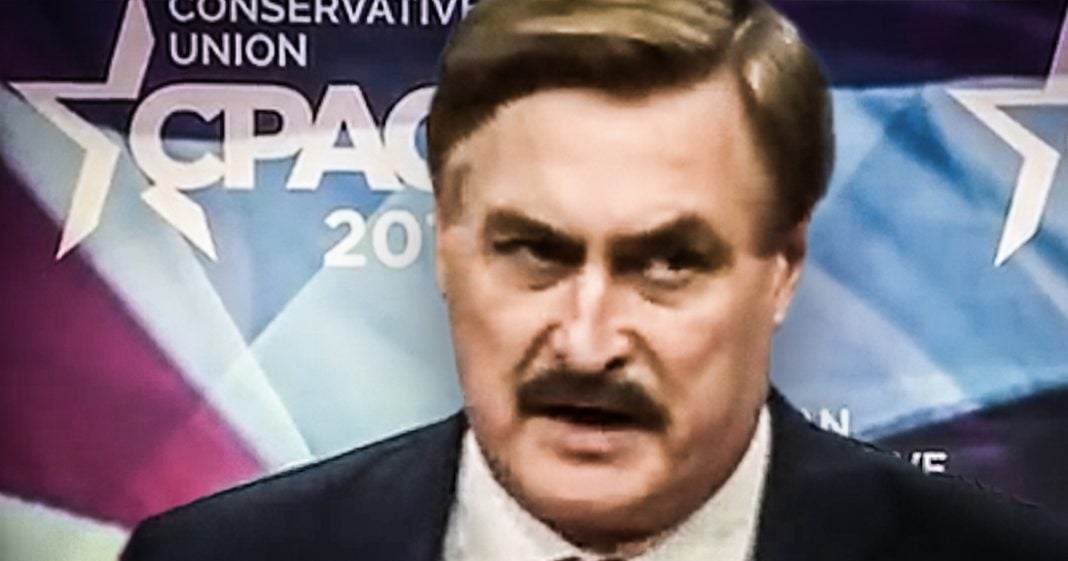 Mike Lindell, the owner of My Pillow, appeared at the Conservative Political Action Conference (CPAC) this week to tell us how amazing Donald Trump really is. Lindell, in a very manic speech, told the crowd that God chose Donald Trump to become the president, and he told the crowd about how he read some books and became an expert on politics. Ring of Fire’s Farron Cousins discusses this.

Well, this week was the Republican CPAC convention where they bring all the heavy hitters from the world of conservative conservatism and they all get to go up on stage and talk about how horrible the Democrats are and not lay out any plans of their own because they’re not smart enough to have plans of their own. So this year they managed to get the biggest conservative celebrity ever, and that is Mike Lindell, the guy who makes my pillow. I guess that’s what passes for celebrity and conservative world. We’re not going to hold that against him. Uh, and Mike Lindell got to go up on stage and give a speech and it was one of the most rambling insane speeches I think I’ve ever heard. In fact, going through it, trying to pick just one part of craziness to highlight it was nearly impossible. So here is a clip of Mike Lindell in all of the crazy nut job things he had to say about Donald Trump. Here it is.

I woke up from years of addiction and I was oblivious as to what was going on in our country. What I saw before me were friends, unemployed, terrible political correctness, people saying happy holidays instead of merry Christmas and people trying to take God out of everything and not even acknowledging Jesus Christ. I s I saw myself thinking back in time to my childhood when seeds of patriotism were planted in our schools, like when we pledge allegiance to the flag and recited that we were one nation under God, I now saw high prices, a poor economy, high crime police getting attacked for doing their job. The family values and morality we’re missing. A president was apologizing to the world for us being the USA and giving billions of dollars to evil empires. A new eval was taking over called Isis. Quite frankly. It looked like the end times prophesies in the Bible. I saw my family and friends living in fear what had happened to our country. I now bring you back in time to the summer of 2015 I see Donald Trump coming down an escalator and announcing he’s running for president.

For me, for me, it was a divine, an ORM and miraculous moment. I’ve felt that something miraculous was about to unfold. I’ve done, I’ve found myself wanting to learn something I knew nothing about, which was politics. I didn’t know a liberal from a conservative. I started reading about it and I couldn’t believe what I read. I definitely felt know who I am. My biggest surprise was that I couldn’t find any crossover. I tried in my mind to make common sense out of this and why anyone would want to be where we had gone as a people in a country. I didn’t make any sense what what people were doing and now we’re we going tobacco in time to 2016 and I see myself in divine appointments and one was especially important. Donald Trump invited me to meet him at Trump tower in New York city. I walked into his office with high hopes on August 15th, 2016 I walked out of that office after meeting with him and I knew God had chosen him for such a time as this.

All right, so I know it’s a very long clip. There’s a lot to unpack out of it. But first and foremost, obviously his claim that Donald Trump was appointed by God. God chose Donald Trump. God wanted Donald Trump. God The guy who’s supposed to be, you know, the moral standard that we all strive to be wanted. This guy who routinely cheats on his wife’s, who was on that access Hollywood tape saying he grabs women by the genitals. Uh, even if they don’t want it, he just does it because that’s who he is. That’s the guy that God chose. According to Mike Lindell and actually many other religious leaders in the Christian, right? That’s who he wanted. That’s the godly guy. Right. But you know, I’m not going to go into Mike Lindell’s history of abuse. I’m glad he’s clean. He got clean. He did start a successful business. That’s true.

And then though he pointed out something that really made me realize why he’s even at CPAC to begin with. He says he knew nothing about politics, nothing. And then over the span of just a couple years, he read some books. He read a couple books over a couple years. Maybe they were long books. I don’t know. I don’t know how fast the guy reads, but he read a couple books and now suddenly he’s a frigging expert on politics leading the stage at CPAC because, hey, I read a couple books. I know everything about American politics. Now we don’t know which books these were, but I’m assuming probably on the conservative side, maybe a Michael Savage book, maybe an Ann Coulter thrown in there. Perhaps even the art of the deal, just to sweeten things up. Who knows what this moron actually read or if he even read anything because honest to God, I’m starting to believe he didn’t, but here’s the thing. They held him up as some kind of a leader and in his little speech there, literally every talking point he gave is something directly out of the Republican playbook for the last 10 years. That guy didn’t see any of the things he claims to see where he said, I saw people saying happy holidays instead of Merry Christmas. I saw rampant unemployment.

You’re, you’re pulling old, tired, false republican talking points. Is that what you read? Is that part of the books that you’d been reading for a couple years to become this master of politics that you are today, allegedly? No. You probably met with a couple of conservative leaders, had them drafter little speech there. You got too nervous and excited to go out there and deliver it properly. That’s why you had that really manic delivery of it. Either that or you’re not as clean as you say you are, but something was amiss in your performance. They’re not to mention the fact that you offered nothing new. You said nothing intelligent, and yet conservatives hold you up as some kind of hero because you’re willing to sell your soul to praise Donald Trump according to you. That’s what God wants all of us to do. And to that I say, no thanks.