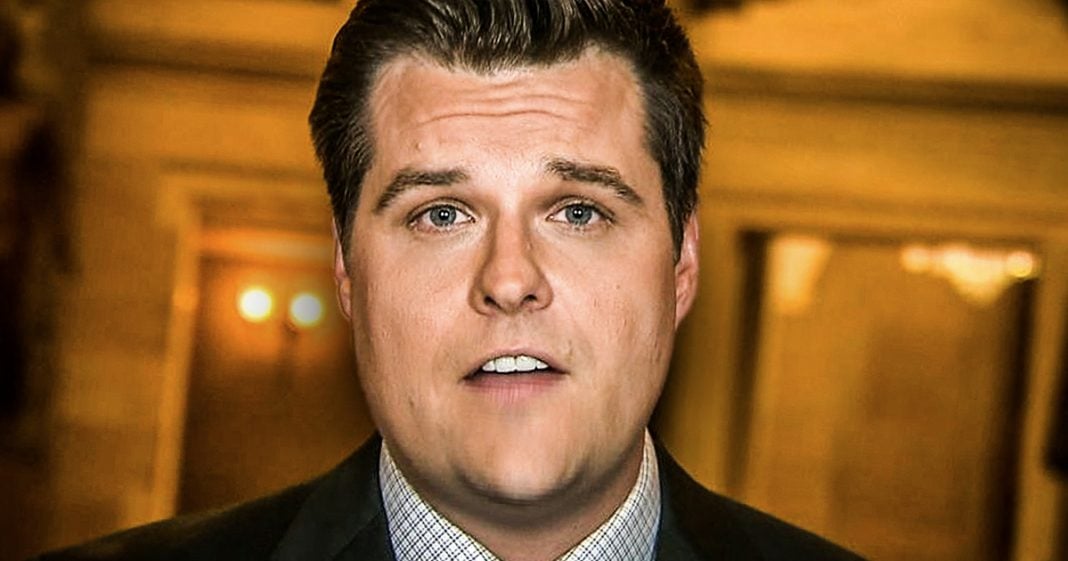 Republican Congressman Matt Gaetz might be in even more trouble than we had previously thought, now that witnesses have come forward saying that they overheard the Congressman on the phone with Donald Trump where he told Trump that he threatened Michael Cohen via Twitter for him. This erases Matt’s apology and his lazy excuses and exposes his blind devotion and loyalty to the President and not to his constituents. Ring of Fire’s Farron Cousins discusses this.

Republican Congressman Matt Gaetz has had a really, really bad week, but it’s a really bad week of his own design. Earlier this week, in fact, the evening before Michael Cohen’s testimony before Congress, Matt Gaetz tweeted out what appeared to be a threat against Michael Cohen, threatening to reveal all sorts of sorted details about his personal life and his family. You know, under the assumption that Colin was going to go in there and attack Donald Trump on Wednesday, Matt Gaetz wanted to make sure that Cohen knew that they had dirt on him too, so he should play nice. Well, immediately Gaetz got attacked for this tweet and not just by people on Twitter. The Florida Bar Association is now launching an investigation into Matt Gaetz to see if he did in fact tamper with a congressional witness. Uh, the house ethics committee is very likely also going to be launching an investigation into him and Matt Gaetz had to go on the house floor.

He apologized to Nancy Pelosi. He says that he spoke to Michael Cohen and apologize to him. He issued a tweet and apologize to everybody and said, families are off limits. Let’s not do this again. I shouldn’t have done it. And then the truth was actually revealed sometime after that because as it turns out, Donald Trump, while he was in Hanoi, Vietnam, made a personal phone call to Matt Gaetz where he thanked Gaetz for threatening Michael Cohen. And according to a staff reporter for the Atlantic who overheard the phone call, this is what Matt Gaetz said. I was happy to do it for you. You just keep killing it. I was happy to do it for you. This is either Matt Gaetz admitting that I did this for you, bud. You know you’re a good friend. I did it for you. Or it could mean I did the thing you wanted me to do.

One of those things carries a prison sentence. Well, technically they both would carry a prison sentence. One of them just carries a longer prison sentence and also implicates Donald Trump in federal witness tampering. So if Matt Gaetz did in fact threatened Michael Cohen on Twitter per Donald Trump’s order, then yes, that would be both of those men engaging in federal witness tampering, which carries a, you know, decent size prison sentence. Matt Gaetz is not going to walk away from this unscathed. At the very least, the Florida Bar Association is very likely to either reprimand him in some way or completely disbar him from the state of Florida from ever practicing law again. But here’s the thing, Matt Gaetz has repeatedly and routinely put Donald Trump’s wishes ahead of the wishes of his own constituents. And I happen to know that because I unfortunately am one of his constituents. But here is the flip side of that.

I have lived in this area for my entire life, went to college here, met a lot of people here. I work here. I walk these streets every day. Most of them are cool with this. Most of the people in this particular district do not care. They love Donald Trump. This is an area that has not voted for a Democrat since JFK is presidential election. Literally every election since then, this district, a hundred percent republican demographics are shifting a little bit, but not enough and not fast enough. Matt Gaetz is pretty safe in his own district, so it will take an act of Congress to forcibly remove him from office because even in spite of his Duis, in spite of the fact that he got his a Florida congressman daddy to get them off on those Dui so that he never faced any real punishment, the people in this district still voted for him in spite of the fact that his first act in Congress two years ago was a bill to abolish the EPA.

The group here still voted for him, even though our area is 100% dependent upon tourism dollars to stay afloat. They don’t care what this idiot does, so it’s going to take other people to care about what this idiot does because we’re just got to keep voting to men because we don’t know no better down here in the south and it’s disappointing and it’s disgusting and we deserve better. We need better. I can’t even say at this point that we deserve better. Matt Gaetz truly is the representative we deserve. Cause he’s the idiot. We keep sending to Congress, but we need better for this area. We deserve better in Congress as a country. And Matt Gaetz Ain’t it. Matt Gaetz has to go. Matt Gaetz is breaking the law and it’s time for Congress members to understand that they can’t do that anymore. Even if they were ordered by the president to do it.