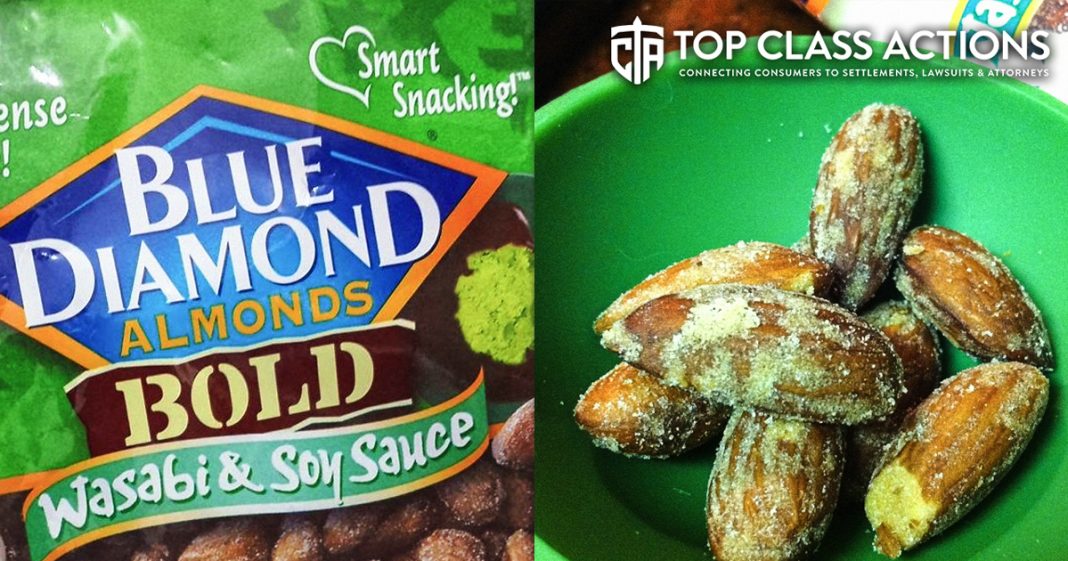 Joining me now to talk about this latest issue is Scott Hardy from topclassactions.com. Scott, today we’ve got blue, blue diamond almonds. They’ve got a wasabi almond that they market out there. Hey, we’ve got this wasabi product. People love wasabi. It’s one of the hot things right now, both figuratively and literally. Not actually wasabi is it?

But of course, that’s not very sexy to go ahead and sell your blue diamond almonds with horseradish. That just doesn’t sound appealing. But when you say wasabi, people go, ah, cool. It’s green, it’s tasty. Let’s go ahead and, and buy that up. But instead of wasabi and soy sauce, this class action alleged that it should be referred to as flavored by horseradish and soy sauce. And I don’t see that one marketing very well. What about you?

People don’t know that and that, that to me, you know, it’s something I, I’m a person, I watch food network constantly. You know, I, I’ve known that, you know, Alton Brown with good eats, did a phenomenal job of explaining that a decade ago. That if you want real wasabi, you almost exclusively have to actually go to Japan. It is a root, much like a ginger root that is graded finally.

And that is wasabi. What we have over here and most of throughout the world is, wasabi paste. It’s not actual wasabi. It tastes a lot like it and most people don’t complain. The problem comes when you start to market your product as blue diamonds has here as being flavored with wasabi, when that’s not actually what it is. And people pay the premium, they pay the higher price because they think they’re getting this actual product, which they are not.

Farron Cousins:                  Yeah, you know it, it tastes great though. I mean let’s, let’s be honest. I, I like the flavor of that. I’ve never had real wasabi. Maybe I am missing out on something there. But you know, if you’re going to have the imitation wasabi, all you have to do really is just change, change the wording. Say wasabi flavored blue diamond almonds. You know, something as simple as adding that wasabi flavored word. That word could have prevented problems for this company. And that’s kind of what we’ve seen in a lot of these instances.

You just add the word flavored and you can help yourself so much. But companies usually think, you know, maybe we won’t get popped on this. Maybe not enough people will sign up for the class action if there is one. Maybe we’ll, we’ll be okay if we just say wasabi instead of wasabi flavored. So I, I do, I like to see when these companies are held to account because all you have to do is be honest about what you’re actually selling to us.

Scott Hardy:                          Exactly. Just go ahead and be honest. Label the package as it’s supposed to be labeled and you won’t be hit with these class actions and have to, you know, churn out a couple of million dollars to pay your dedicated customers who love your product but just want to be told the truth.

Farron Cousins:                  Exactly. It doesn’t change the flavor of what people are getting. You’re just being a little more up front to them about what they’re actually getting. If anybody needs any more information about this particular issue, you can follow the link in the description of this video. Check out topclassactions.com and subscribe to their newsletter to stay up to date on all of the information that consumers need to know. Scott Hardy with topclassactions.com, I appreciate you talking with us today.