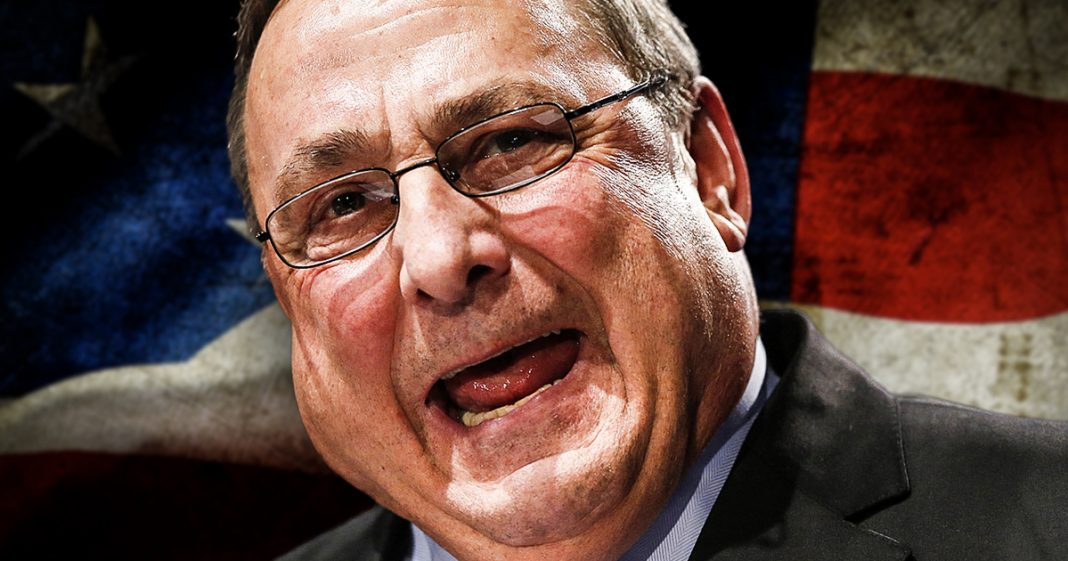 The former Republican governor of Maine, Paul LePage, unloaded on a bill going through the Maine legislature right now that would abolish the electoral college in the state and instead give the weight to the popular vote. LePage whined that getting rid of the electoral college would “allow minorities” to pick the president, and that the archaic process is needed to help protect white people. Ring of Fire’s Farron Cousins discusses this.

Former Republican governor Paul Lepage from Maine has a lot of things to say about American politics. He always has had a lot of things to say. It’s just that few people have paid attention to him because, let’s be honest, we typically don’t pay attention to much of the stuff that’s actually happening in Maine. You know, it’s as far north as you can get on the eastern seaboard. People tend to forget about it, but for too long that state was ruled by this horrible human being named Paul LePage. When he first got elected. I had to do a massive a report on him for one of the organizations I was contracting with, and this guy’s history is absolutely disgusting, but luckily we don’t have to go back through the history to find the disgusting things because just this week, Paul LePage told us exactly what he thinks about the electoral college.

You see, right now in Maine, in the legislature, there is a bill that would abolish the electoral college for the state of Maine and instead award their votes based on the popular vote in the state. That’s how you win main. Now if that legislation passes, what pissed off Paul Page and Paul LePage went on a local radio show this week and he said that if we do this, that means the minorities are going to get to pick the president. You know, the, the whites including himself, he said, are going to become a forgotten people. Here’s what he said. Um, actually what would happen if they do what they say they’re going to do is white people will not have anything to say. It’s only going to be the minorities that would elect, it would be California, Texas, Florida. But you know, the minorities, they are the white people become the forgotten people.

In fact, it would. It would actually take away some of it, you idiot, because we wouldn’t be fighting for a set determined amount of large electoral votes. The voters in Florida, each individual person, each individual person in Texas or California or Wyoming and Nebraska in Wisconsin, every single person’s vote would. At that point, you’re not trying to win a state. You’re trying to win over people borders. No longer matter. It would be more representative. It would be more fair and it would have changed the course of the 21st century had we abolish this piece of crap. Electoral College a hundred years ago, two presidents in the last night, teen years, two out of three couldn’t win the popular vote in their first election. So yeah, the United States would be a very different country today if we relied on popular vote instead of this outdated and racist electoral college. But you can thank racist people like Paul LePage for helping to scare too many people in this country into keeping the electoral college in place.