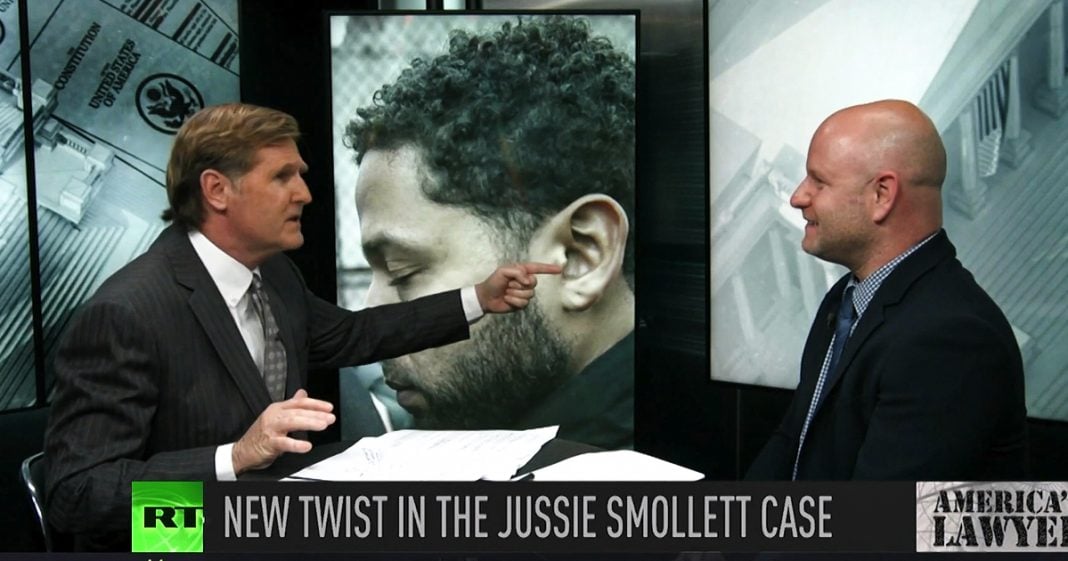 Via America’s Lawyer: Actor Jussie Smollett was arrested last week after an investigation found that he faked the alleged attack that he claimed happened to him on the frozen streets of Chicago. Mike Papantonio and Trial Magazine Executive Editor Farron Cousins discuss.

Mike Papantonio:             Actor Jussie Smollett was arrested last week after an investigation found that he faked the alleged attack that he claimed happened to him on the frozen streets of Chicago. Okay, let me tell you this. You saw the story. I saw the story when it first came out. We both talked about the same thing. Wait, let me get this right. You got two guys walking around in subzero weather at two o’clock in the morning in Chicago and oh by the way, they just happen to have Clorox with them and they just happen to have a noose with them.

And by the way, Jussie Smollett, just happens to be walking around. As soon as you saw the story, your reaction was mine. I looked at it and said, no, there’s more to this story, but not corporate media. This was like, you know, we’re going to get a lot of looks of this. CNN went crazy. You couldn’t even turn CNN or Msnbc on with the, the attempt on Smollett’s life. Take it from there. I mean, we had the same reaction, didn’t we? We said, this is insane. This is, this is a hoax. But not corporate media. No, sir.

Farron Cousins:                  It’s really interesting because what you just pointed out there is exactly what the media should have first said, it’s common sense. The temperature at the time was anywhere in the city between negative 12 and negative 21.

Farron Cousins:                  So huge negative double digits in temperature and, and according to statistics, when the temperature’s hit that low in Chicago, crime essentially stops because nobody’s out and about because you are technically risking your life, from hypothermia in just a matter of minutes. So no, these men would not have been hanging around for 30 minutes or an hour. They would have been frozen.

Mike Papantonio:             Look, here’s, here’s what really grabs me. The producers that went with these, with this story should be fired. Good Morning America, I promise you the producer who said, yeah, I’m not going to look any further at this. I’m gonna put Robin on with this nutcase, and I’m not going to say, let’s ask some tough questions. That person should be fired. Unfortunately, that’s not how corporate media works.

The whole thing was a hoax. Lot of people after about week one said this, this is not a real story, but you had the hangers on, the producers, the, the anchors, the folks in media who said, yeah, this is too good to let go. Remember that story?

Farron Cousins:                  Yeah. Well, and, and what’s interesting too about the Smollett thing, the day before he was arrested, the news story broke about the lieutenant in the coast guard who was going to go out and kill enemies that he saw, he thought were enemies of president Trump. Members of the press. Pelosi was on the list. Ocasio-Cortez was on the list. And that story gets buried. So if you, if the media really wanted to say, look there, there’s incidences of hate all over this country. You know, some politically driven, some just people with hatred.

We didn’t have to run with this because there’s real bad things happening in the country. But this guy who staged it to further his career, reports say he was unhappy with his salary and he wanted a raise and he thought this was going to, you know, raise his profile. This story was so transparent from the beginning. It’s crazy.

Mike Papantonio:             It was to me and it was to a lot of people in social media. If you took a look at this story early on just in social media and people are going wait a second, what is it I’m missing? Guys with bleach two o’clock in the morning, sub zero weather. They happen to have a noose with them. Smollett happens to be out in front of this guy.

Let me tell you something. Had that camera which this bone heads Smollett didn’t have enough sense to understand, had that camera been focused on that event, it might’ve caused riots in Chicago. And, you know what, that had, that story had big ramifications if the media had not been called out ultimately on it.