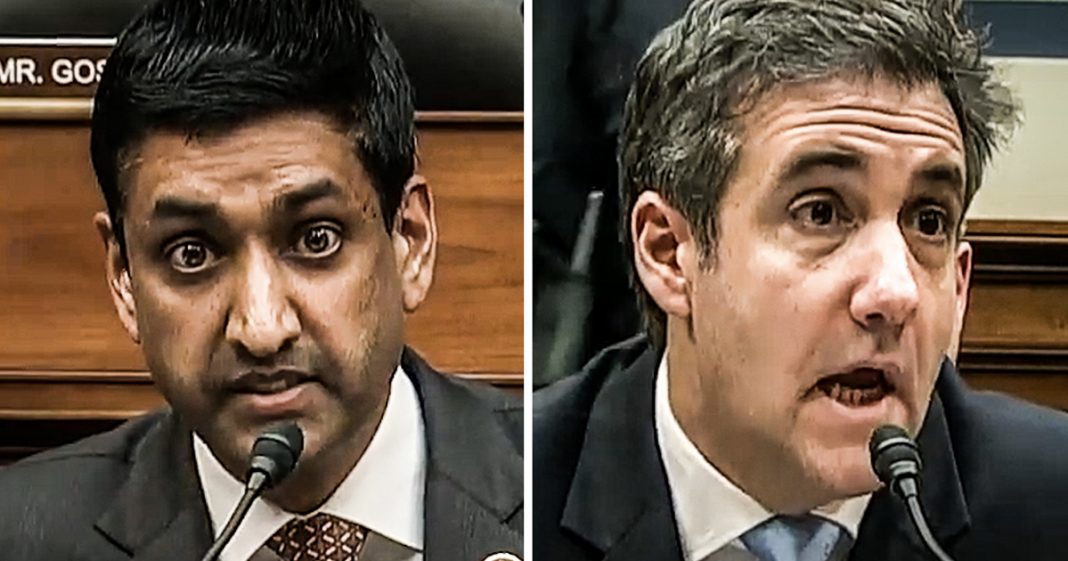 During his testimony on Capitol Hill on Wednesday, Michael Cohen faced a barrage of questions from Democrats looking to tie Donald Trump and his family into a financial fraud scheme, and they succeeded. Democratic Representative Ro Khanna was the most effective, getting Michael Cohen to admit that it certainly looks like Donald Trump, Donald Trump, Jr., and Trump Organization CFO Allen Weisselberg engaged in “garden variety” financial fraud with their payments to Cohen to cover up Trump’s affairs. Ring of Fire’s Farron Cousins discusses this.

There was a lot of really great questions asked by Democrats yesterday during Michael Cohen’s testimony. Most of the great questions, however, came from the the younger members of Congress. We had AOC grilling Michael Cohen about financial crimes, and even more shocking than that, we had representative Ro Khanna actually getting Michael Cohen to admit the Donald Trump, Donald Trump jr and Allen Weisselberg, the CFO of the Trump organization engaged in financial fraud. Not just exposing it, actually admitting, willing to admit that. Yeah, it looks like they engaged in financial fraud. You’re right, Mr Kauna. Here is a clip of that exchange, which to me was the most powerful exchange that took place yesterday. Here it is.

I just want the American public to understand the explosive nature of your carrots testimony in this document. Are you telling us Mr. Cohen, that the president directed transfection in conspiracy with Allen Weisselberg and his son Donald Trump, jr as part of a civil criminal as part of a criminal conspiracy of financial fraud? Is that your testimony today? Yes. And do you know if this criminal financial scheme that the president, Allen Weisselberg and Donald Trump jr are involved in, is being investigated by the southern district in New York?

I’d rather not discuss that question because it could be part of a investigation that’s currently ongoing, but I just want the American public to understand that it’s wholly apart from Bob Mueller’s investigation. There is garden variety, financial fraud, and your allegation and the explosive smoking gun documents suggest that the president, his son and a CFO, maybe involved in a criminal conspiracy. And isn’t it true, Mr. Cohen, that this criminal conspiracy that involved for people, that there’s only one person so far who’s suffered the repercussions and that’s why you’re in jail. Ooh, be going to jail. Yes. The three other people though who were equally involved in this conspiracy. Yeah, that’s true. It is true. Thank you Mr. Cohen.

If you have the time, please go back. Watch all of Ro Khanna’s five minutes of questioning because it is remarkable. I mean, he absolutely did everything perfectly. And again, God, Michael Cohen, Donald Trump’s lawyer slash fixer to admit that. Yeah. The way you’re laying it out certainly does look like they committed financial crimes by having Donald Trump pay me out of this trust rather than from his own pocket or from somewhere else. It feels like they’re cooking the books. Is What Ro Khanna saying? He said this is garden variety, financial fraud, and he is 100% correct and this is going to lead, you know, deeper investigations into all of that. But Ro Khanna also said something, you know, I’m not talking about collusion. This has nothing to do with collusion. What we’re talking about right here, pretty much verifiable financial crimes committed by these people. We may not even need the whole collusion thing and that is correct.

Now, I’m not saying I don’t believe collusion didn’t happen. I mean at this point the writing’s on the wall with that, right? We, we understand that something took place, but that’s something in spite of all of the evidence, honestly, it is almost impossible to prove. However, what Khanna was trying to get us to focus on what Michael Cohen was saying was that we have crimes that have been committed right here in broad daylight. We don’t need the Mueller report. We don’t need all of that. And the collusion in the interference from rush, we’ve got what we need right now, folks, and it’s in the form of financial fraud. Something a lot of us have been saying for a year and a half would be much easier to get him on. Luckily, the southern district of New York has been working on this for quite some time. Michael Cohen has been working with them. Allen Weisselberg has also been working with them, so it’s very likely that we’re going to get something in the form of criminal charges from that investigation. And coupled with Cohen’s testimony from yesterday and the tough line of questioning from people like Ro Khanna and Alexandria Ocasio-Cortez, we know that Michael Cohen knew about it and he agrees that this is garden variety financial fraud.