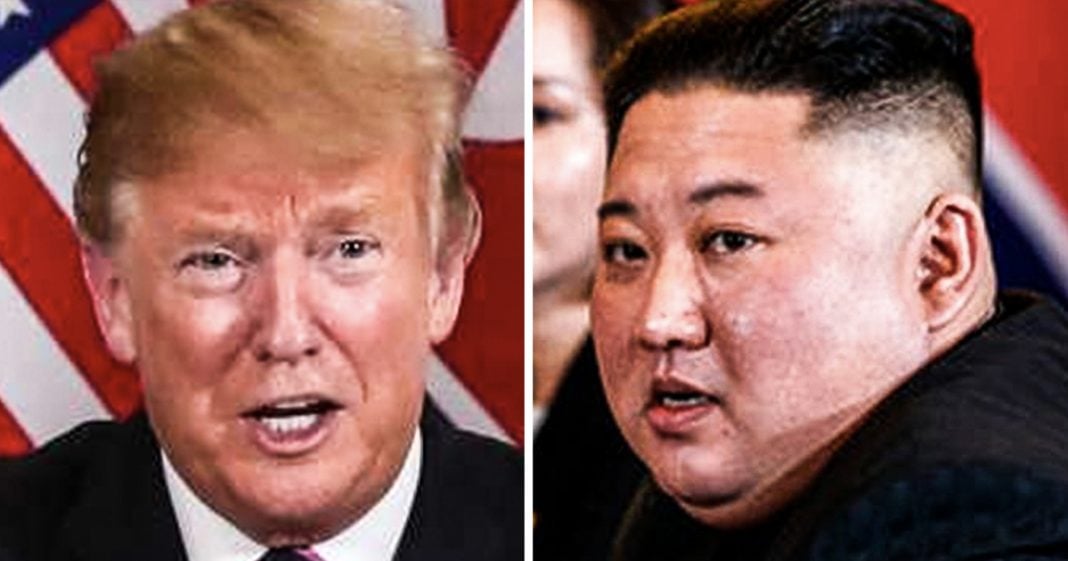 As part of the “negotiations” taking place between the United States and North Korea, the US has agreed to NOT require North Korea to fully disclose all of the nuclear weapons and technology that they currently possess. This caveat will allow North Korea to lie to us about what they are hiding and building, and shows that they aren’t acting in good faith. But in all fairness, Trump isn’t acting in good faith either, and his nonstop Tweets bragging about “investment opportunities” in North Korea show that he’s just in it for the real estate potential. Ring of Fire’s Farron Cousins explains what’s happening.

Domestically. Most of us here in the United States, we’re glued to our televisions yesterday, watching Michael Cohen’s testimony, uh, we’ve been preparing for that for the two days prior to the testimony. And today, most people are just talking about what happened yesterday, but at the same time, we’re laser focused on Michael Cohen. We also have to remember that Donald Trump has over in Hanoi, wining and dining with a brutal dictator. And we found out late yesterday evening that the Trump administration has decided to just make things so much worse with regards to our relationship with North Korea. Because as part of the negotiations, the Trump administration has gone ahead and immediately cowed down to them and said, all right, hey, here’s what we’re going to throw out. First and foremost, you no longer have to report or be subject to an audit so that we know exactly how many nuclear weapons you have, what kind of missiles you have, and what kind of other nuclear technology you have.

We’re not going to check up on you anymore with regards to any of that. And you don’t have to tell us what you have. Donald Trump, literally the expert negotiators, stable genius came to the negotiation table and immediately handed Kim Jong on everything he could ever want. He immediately caved before the talks even began, about a decade ago, a similar piece talk with North Korea to get them to denuclearize was taking place. And the reason that North Korea walked away from the a negotiation table is because they wanted the us to stop checking on what kind of technology and missiles they had. The U s said, we’re not going to do that. This is part of the deal. If we can’t verify that your denuclearized thing, why, why we’re even here in North Korea walked away. So Trump comes to the table and says, we won’t ever check and see if you’ve denuclearized. We don’t.

We don’t really care. We don’t care. Do whatever. We’re not going to check on you. Build your muscles, increase your nuclear capabilities, which we already know you’re doing. I’m going to go out there, go to a podium, send out on Twitter that you’re such a great guy and we’re super best friends now. Oh. And also you told me you didn’t kill auto, a warm beer. So I’m gonna to take your word for it because I always side on the side of dictators as opposed to national intelligence from my own, uh, agencies here in the u s I always believe a dictator when they didn’t, when they tell me they didn’t kill an American citizen, we, we’ve seen that act before. We saw it actually very recently with Donald Trump. Once again, crapping on the United States is what Donald Trump did. He crept on us, all cited with a brutal dictator who does murder his own people, agreed to never check and see whether or not he’s building nuclear weapons and what we going to get in return.

I’ll tell you what’s going to eventually happen and this is what I said when the last conference with Kim Jong Un took place. We’re going to have Trump tower Pyongyang. We’re going to have Trump towers all over North Korea because the only thing Donald Trump has ever said about since leaving that first meeting was, wow, that’s some great real estate opportunities there. Some great investment opportunities. He’s actually been tweeting about that. Uh, during this meeting about the investment opportunities, the economic possibilities. He’s in it for himself. He didn’t give a damn what happens to us here in the United States. He doesn’t give a damn if North Korea denuclearize is, all he wants is to be over there, uh, be able to go over there, build some hotels, built some condos, sell them at an inflated price and make a few million dollars and an exchange. All he had to give up was the national security of the United States. Good deal for him. Pretty crappy deal for literally everyone else.