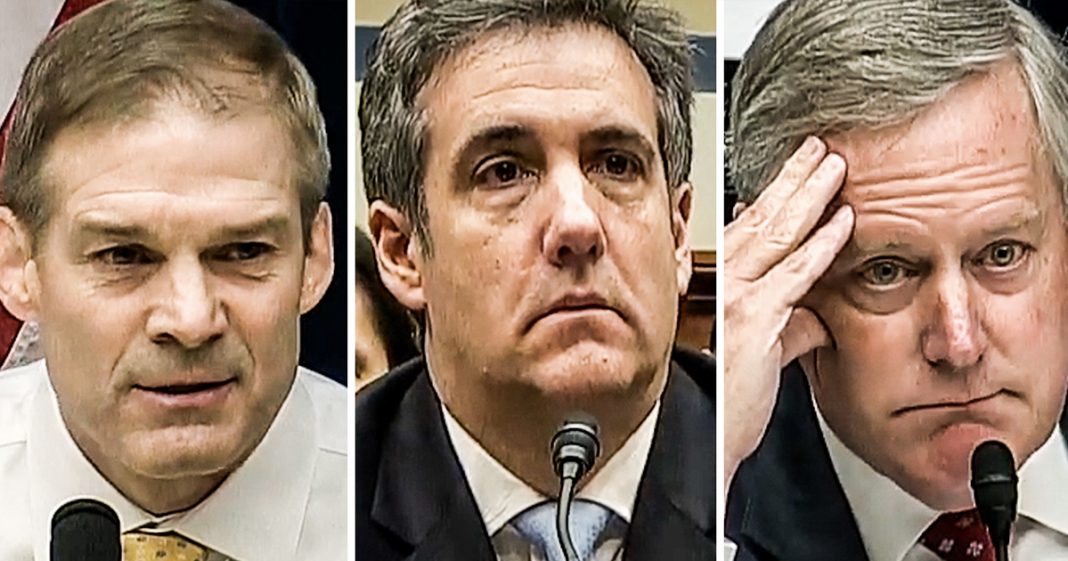 During Michael Cohen’s testimony on Wednesday, Republicans repeatedly told us that Cohen was a criminal and that he couldn’t be trusted. What they completely ignored was the fact that he served as the Deputy Finance Chair of the Republican National Committee up until the middle of last year, so at one point they believed he was trustworthy enough to handle their entire Party’s finances. Ring of Fire’s Farron Cousins explains how the Republican attacks on Cohen actually expose the entire party’s decay.

While there were a lot of different takeaways from Michael Cohen’s testimony yesterday in front of Congress. To me, one of the biggest takeaways actually had nothing to do with any of the criminal activity that Cohen either alleged that Trump did or engaged in himself. To me, what stood out the most was the fact that Cohen exposed the entire Republican Party, and here’s how he did it. He did it without even trying because as soon as he sat down, Republicans were trying to go ahead and put an end to the hearing before it even began. They tried to stop it from actually happening by invoking these archaic rules, and luckily they were unsuccessful with this. But the big question is obviously, why would they not want Michael Cohen to testify if he is in their own words, a pathological liar who cannot be trusted and who repeatedly lies to Congress?

So all of his testimony is worthless anyway. Why would they want to put an end to it if everything he said was a lie? Well, the answer is because Michael Cohen is a hell of a lot more than just Donald Trump’s lawyer. Oh, excuse me. As Republican said, one of many lawyers that Donald Trump has had over his entire lifespan. You see Michael Cohen, and I’m super mad that this didn’t come up during the hearing from any of the Republicans served as the deputy finance chair of the Republican Party. This is something a lot of us have known and realized and talked about for quite some time. Yet people on Twitter seem shocked to learn that information. Yesterday he was at the top levels of the Republican National Committee. They trusted him so much that he was the second in command with regards to all of the parties money, and yet they’re sitting there telling us that we can’t trust him, that he is a liar.

He is a thief, he is a con man, but just eight months ago they trusted him so much that he got to be second in command under Steve Wynn who’s going through his own legal problems right now. Second in command for the entire Republican parties trust fund. This wasn’t just about Donald Trump, this was about the entire Republican Party. Cohen worked for all of them, and I guess conversely, they all worked for Cohen. They’re all in this together. That is why the Republicans were freaking out yesterday. They knew, they knew what he was going to allege that Trump was and Trump had done. That’s why they really didn’t spend too much time actually defending Donald Trump just trying to tear down Michael Cohen, but every time they tore him down or attempted to, they were tearing themselves down. Because Michael Cohen is inseparable from the Republican Party. You don’t give somebody that kind of leadership position to be deputy finance chair of the RNC if you don’t believe in what they’re doing, if you don’t think they are of good character.

But that is exactly what the Republican Party did. So the biggest thing that Michael Cohen did yesterday was expose the inherent corruption within the entire Republican Party. And that’s why every Republican there, Jim Jordan, Mark Meadows, and the rest of them, that’s why they were freaking out, because they know that not only does Michael Cohen know all of the dirty little secrets of Donald Trump, he also knows all of the dirty little secrets of the National Republican Party. Luckily for those people on the committee, he chose to only focus on the crimes of Trump and not tell us about all the dirty dealings of the RNC.