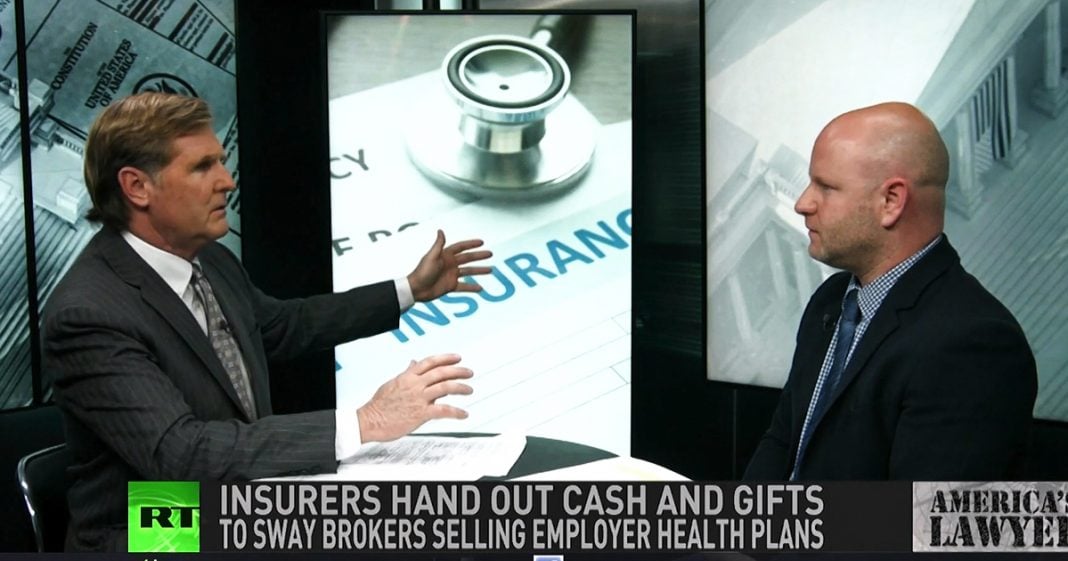 Mike Papantonio:             More than half of the people in the United States get their health insurance coverage from their employer and most of them aren’t happy with that coverage. A new study came out that helps explain why your coverage from your employer is so awful and I have Farron Cousins from Trial Lawyer Magazine with me now to tell us about it. Farron, this story, it was really, it’s still under the radar.

Propublica did a story on it. NPR did an investigation on it and right now people are complaining that this new, this new shift, the new Obamacare shift, the new coverage issues, they feel like they’re getting a lot less and they’re blaming it on the legislation to some degree. But really when you look at this story, it’s really about the same old thing. The people at the top trying to squeeze as much money as they can out of the American consumer.

We’ll go sell them to the employer. But what we didn’t know until now is that the insurance companies and these brokers had worked out deals. These brokers in many cases get a percentage of the plans they sell and they get that as long as the employer goes with them.

Mike Papantonio:             Let’s back up. First of all, we would expect the American, you know we, we expect that salespeople get commissions. We expect all that. This is different though

Mike Papantonio:             This is where you have you, you, you go to the HR Department or whoever it is that’s making the decision. You say, look, we have two options for you. Option A and option B and they don’t tell him about options C because option C might give the best coverage. It might do away with, it might do away with a lot of the problems that A and B have, but the broker who, who really has a conflict of interest here. Clear conflict of interest says, you know what we think you ought to go with, with program A because program A, the broker is making a lot of money that he’s not disclosing why he doesn’t talk about C.

He talks about A, because that’s where he makes the most money. That’s where he gets his trips around the world is, you know, his voyages to Europe. This is something that there, there’s no regulation here. We have brokers that are out there operating and people working in companies don’t even know why their insurance coverage has gone from bad to worse.

Farron Cousins:                  Well, and it’s interesting too that you brought up these incentives they get, not just the commission. You understand if somebody sells and they get a commission, whatever, but, but they’re also offering these bonuses. Sometimes for a group of brokers, you can get a $150,000 bonus, but it’s not the health insurance company that’s paying that. Those bonuses, these trips, you know, they had one offer go play baseball with a major league Hall of Famer.

Mike Papantonio:             The problem is so bad in the United States that they’ve actually had to come, there are actually organizations that have been put together where they’re saying it’s, it’s called Health Rosetta. Health Rosetta is an organization that says, look, there are about a hundred thousand brokers in the country and all those 100,000 brokers should be required to disclose to the HR or to the company. We have these other plans and they’re better for your employees, but I don’t make as much money.

So this organization, Health Rosetta is saying, I mean the numbers are staggering. I think there’s only a hundred, maybe 110, 111 organizations that, that follow this Rosetta plan. And that’s out of 100,000 brokers in the country. Why? Because there simply is no transparency. There’s no regulation to demand transparency. And because of that, the problem for the average person, the employee is the coverage is getting much less. And the, the, the costs just to have the coverage is increasing.

Farron Cousins:                  Right, and this Rosetta group, what they do is they’ve said, listen, we don’t take percentages, we don’t take commissions. It’s a flat fee. We do our job for you. We’re going to do the best we can for you. Nobody is giving us additional money. And that’s what makes the difference. And with these plans that we currently have now, the up sells. What they’ll do in a lot of cases too, is charge for a more expensive plan that covers things that there’s no way anybody in your company could ever possibly need.

Farron Cousins:                  But they sell it as, well just in case you know what, if you have an employee and this happens, then your whole plan gets blown up. So by this one with this extra covering.

The, I mean you know they have training in HR but they don’t have training to understand this scam. And the scam if, if you, look, it’s impossible for me to believe that if you tell a broker, if you sell this, this, this item that is substandard by all, by all means it’s substandards. If you sell this, we’re going to give you, you can make as much as $150,000. these bonuses run up to where the, the entity is paying out $150,000 in kind of extra bonuses for selling this kind of stuff.

And so it, it, it, it’s impossible for me to believe Farron that in that, in that environment that you don’t have brokers that are taking advantage of this and the HR department really doesn’t even know about it.