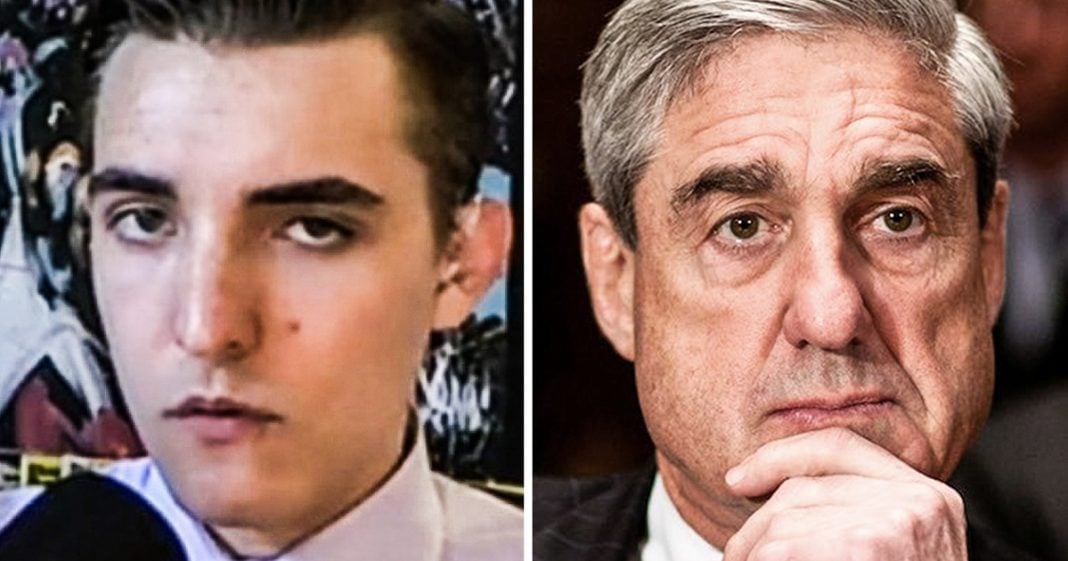 Not that long ago, Donald Trump’s favorite Twitter troll Jacob Wohl held a poorly attended press conference where he claimed to have evidence that Robert Mueller sexually assaulted a woman a few years ago. The evidence was never made available, and now the woman who alleged that she was attacked says that Wohl made the entire story up to try to discredit the Mueller investigation. Ring of Fire’s Farron Cousins explains what happens next for the little sycophant.

Just a few months ago, most people, unless you actually read through the replies to any tweet from Donald Trump, most people never heard of Jacob Wohl. Well then Jacob Wohl came out and said, Aha, I found a woman who says that Robert Mueller sexually assaulted her and I am going to bring this forward and I’m going to discredit Mueller and I’m going to put an end to this, uh, investigation and I am going to be the savior of the Trump administration. So Jacob Wohl, uh, holds a press conference where this woman was going to come out and tell her story and blow the lid off the whole thing. And unfortunately for Walsh, she never showed well. This week she finally spoke out and told us exactly what happened. And exactly what happened is that Jacob Wohl fabricated the entire story in an attempt to discredit Robert Mueller. Woman’s name is Caroline cass. And here’s her story. Cast revealed that Wohl first approached her by pretending to be a man named Matthew Cohen, who was purportedly a private detective who had received training from Israeli intelligence agencies.

The kid is like 21. Anyways, probably about 90 pounds, so I don’t think anybody would have believed he was trained by special forces anyway. Um, initially he said he wanted to help cast deal with some individuals whom she claims stole money from her. It eventually became clear that he wanted her to go on the record and make a false rape accusation against the special counsel. They made it up cast set of a sworn statement about a sexual assault by molar that she purportedly signed and that was given to reporters at Wohls infamous press conference. They wrote it and docusigned it, so she didn’t even sign off on the letter Wohl. Met her according to her, wanted her to do this. She was uneasy about it, but Wal said, screw it. I’m going to do this anyway. Falsify the documents. Fake your signature. Hold a phony press conference, won’t you please show up and tell us that this actually happened.

Even though we all know it didn’t. She then said she had to escape from Wohl to avoid going to this actual press conference because we saw the picture in the airport. Right. This dude was was ready. He had her there and she had to escape from this creepy little Trump troll so she didn’t have to go to the press conference. But here we have it folks, the woman who was at the center of this alleged bombshell story tells us the whole thing was faked and that she never even signed off on it. Jacob Wohl should be in prison. Jacob Wohl needs to be arrested immediately. He may be, he and Matt Gates can share a sale. Who knows? But this kid is a danger. He is a threat and he is engaging in illegal activity in an attempt to discredit the special prosecutor. What’s more, and this is probably the most disgusting part of the story, is it Caroline cass says that she hasn’t even been contacted by the FBI to tell her story.

And the FBI was given this information by the special prosecutor’s office several months ago and the FBI is just sitting on it and doing nothing. That’s pathetic and that is a disgrace. Jacob Wohl needs to be locked up. Jacob Wohl is a liar. He is a con man and he is attempting to discredit and investigation that could blow open the entire Trump administration and Wohl desperately wants to be a part of that Trump administration, but it ain’t gonna happen, buddy. You’re going to end up in jail and hopefully while you’re there, you’re going to tone it down a bit. You’re going to learn to maybe be a better person and actually get rehabilitated because if you don’t, I can promise you your life is going to be pure misery from this point forward.