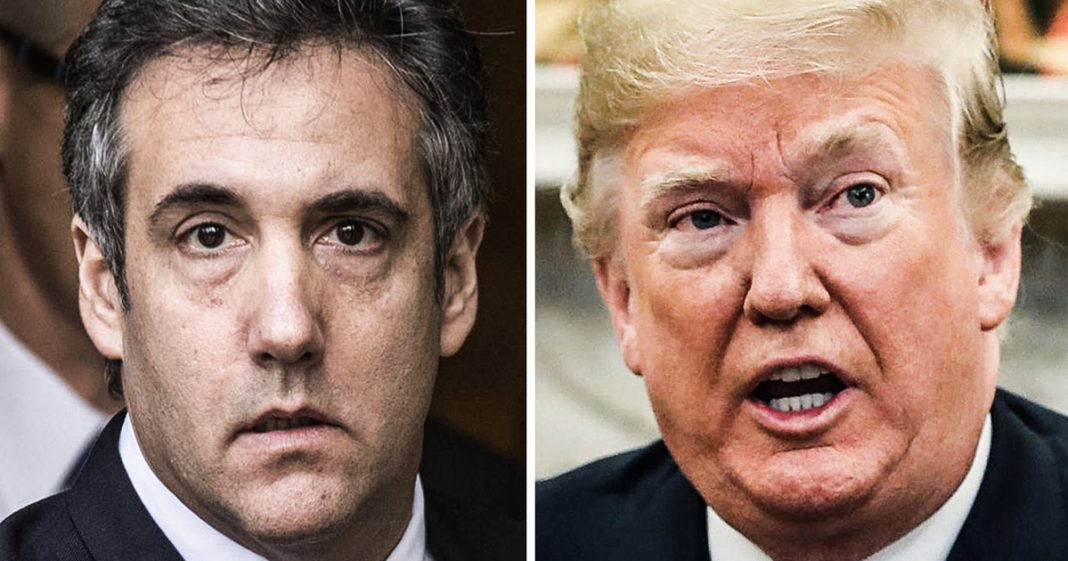 Today is the day that we’ve been waiting for – Donald Trump’s former lawyer / fixer is testifying before Congress. But even before the testimony began, we got a very clear picture of everything that Michael Cohen wanted to say. He released copies of the checks that Trump wrote to him to cover up his affairs, he told us that Trump really doesn’t like black people, and most importantly, implicated the President in felony activity. Ring of Fire’s Farron Cousins explains what’s happened so far.

While folks today is the day that a lot of us have been waiting for Michael Cohen, Donald Trump’s former lawyer slash fixer is officially testifying publicly in front of Congress. In fact, he is testifying before Congress right now. But even before that testimony began, we already knew exactly what Michael Cohen was going to say because for the last 12 to 14 hours, stories have been coming out. For example, his entire opening statement was leaked to the press copies of the checks that he received from Donald Trump himself to uh, basically reimburse him for the hush money payment to Stormy Daniels. We got copies of those leaked to the media. We know everything that Michael Cohen is going to say today. What we don’t know is how Republicans on the panel are going to react. We know the Democrats are going to be pretty excited and they’re going to hammer him and tried to get him to leak everything but Republicans, obviously they’re going to take a much more calm approach and try to paint.

Michael Cohen is a liar as a trader is somebody who can’t be trusted because he already did lie to Congress, but one of the other things Michael Cohen’s already confirmed even before the testimony was that yes, the Buzzfeed report from a few weeks ago was correct and Donald Trump did instruct me to lie under oath to Congress, which is very interesting because obviously the special prosecutor’s office had to come out after the Buzzfeed report was released. It say that no details of this story are incorrect and as we pointed out immediately after that was such a vague denial that it could have been something as simple as the date, time or place when Cohen revealed this information was incorrect, prompting the response so as not to get Donald Trump pissed off enough to go and fire Robert Mueller. Turns out that was 100% true. According to Michael Cohen, Trump did instruct him to lie.

There may have just been other small, tiny things that are inconsequential in the Buzzfeed report that were inaccurate. Cohen also told us that, yeah, Donald Trump knew that Roger Stone was talking to Wikileaks, trying to get those Hillary Clinton and DNC emails. He also told us that Donald Trump jr is an idiot. We already knew that, but he did say he’s the most incompetent person that he’s ever seen. Um, and he also said that Donald Trump senior, the president of the United States 100% knew about the Trump tower meeting between junior Kushner Manafort, I believe it was, and Russian attorney Natalia vessel net skyah. So that’s a lot to take in. And obviously it also implicates Donald Trump in several crimes because of Trump did instruct Cohen to lie under oath. That is a felony. That is a felony for which Donald Trump could and should be held accountable but likely won’t. Because what they want to focus on is the collusion part.

Oh my God. Roger Stone and Wiki leaks. We know all that. We can piece those together. We don’t even have to piece those together. Folks. If Cohen has the documentation with which he does, we can pop Trump right now on witness tampering, witness intimidation, obstruction of justice, and all kinds of other felonies. We don’t need much more than that, although would be the icing on the cake, but I’m telling you right now, yes, if what Cohen is saying is true, there is enough evidence to impeach, remove, and then prosecute Donald Trump today. It’s not going to happen today. Probably won’t ever happen, to be perfectly honest with you, given the way the Republicans in the Senate suck up to him, they’ll never vote to remove him from office, but what this is going to do is completely tarnished Donald Trump’s reputation and make a 2020 presidential run insanely difficult for this man. That is probably the best that we can hope for realistically, as a result of Michael Cohen’s testimony today. Sure. It would be great if we could remove Trump from office, but realistically, I think hurting is 2020 chances is the best we’re going to get from today.