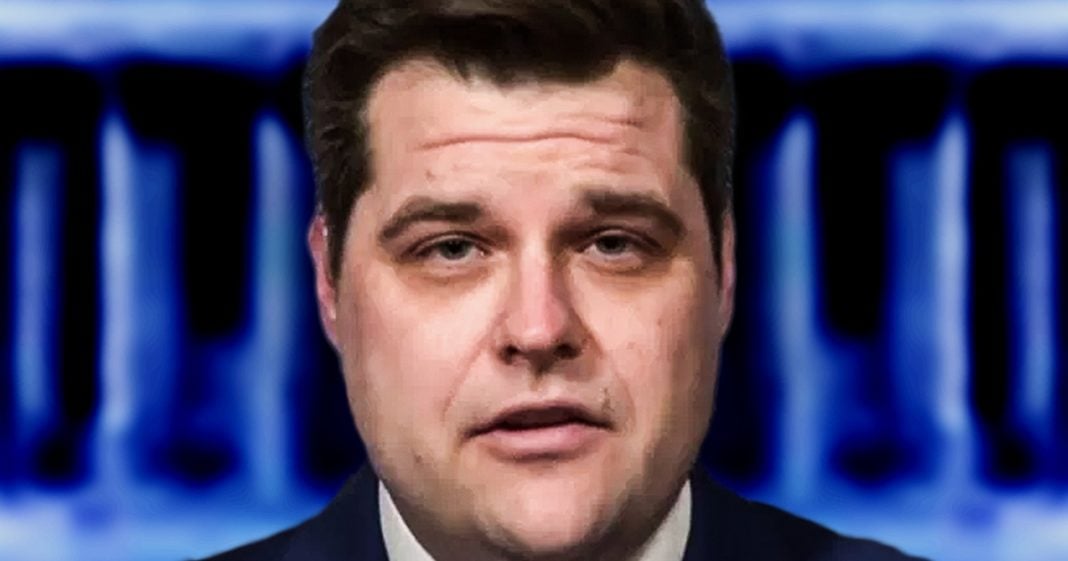 Republican Representative Matt Gaetz needs to think before he tweets. The day before Michael Cohen’s testimony to Congress, Gaetz tweeted out what many perceived to be a threat against Cohen by saying that Cohen needed to have a talk with his wife about his alleged mistresses before his Congressional testimony. Gaetz was implying that he was going to spill the beans during Cohen’s testimony, and that would constitute as witness tampering, a federal crime. Ring of Fire’s Farron Cousins discusses the tweet and the reaction from legal experts.

Republican Representative Matt Gaetz. My proud representative from right here in Florida’s first district, um, found himself in a lot of trouble yesterday. Trouble for which he actually had to go to the house floor and make his case that no, I swear to God I didn’t just commit a felony on Twitter, which he pretty much actually did. Here is what Matt Gaetz tweeted out. He said, hey, at Michael Cohen to 12 do your wife and father in law know about your girlfriends? Maybe deny it would be a good time for that chat. I wonder if she’ll remain faithful when you’re in prison. She’s about to learn a lot. This tweet from Matt Gaetz was sent last night, you know, night before Michael Cohen set to testify publicly in front of Congress and we have a sitting member of the US House of Representatives telling him that, man, I’m going to let you have it. I’m an expose all your dirty secrets.

What are you going to do about it? Maybe, maybe if you’re cool, I’m not going to have to lay all this out there. This is witness tampering. This tweet alone, which Gaetz eventually went back and deleted. But luckily the screenshots we’ll live forever so you can see it anytime you want. Uh, Gaetz claimed that, no, no, no. That was a witness tampering. In fact, in an interview outside of his office, he said, well, I was witness testing. I was a witness tampering. I was testing. He didn’t really elaborate any further as to what witness testing means. However, we do know from actual real legal scholars who are not Matt Gaetz, uh, including Richard Painter, uh, who was with the George W. Bush administration and Walter Shaub, who’s with the Barack Obama administration and six months in the Trump administration, uh, they have both said that this is 100% witness tampering Schaub when, as far as tweeting out the sections of us code where we can clearly see that yes, Matt Gaetz engaged in witness tampering, trying to sway Michael Cohen’s testimony before he ever began it.

Richard Painter, the George W. Bush guy, the Republican actually went a little further that he said, Matt Gaetz should be arrested right now. Don’t wait. We have the evidence. It’s in the tweet. I’ll go arrest him now and I’m going to have to go ahead and side with pain her on this one because Mike, Matt Gaetz should 100% be arrested. This is conduct unbecoming of a member of the US House of Representatives. It’s a felony and he should be arrested and he should be immediately kicked out of the House of Representatives and for good measure, forbidden from ever running for any public office again for the rest of his life. Matt Gaetz has an absolute, not just to those of us in the first district whom he represents, but to this entire country and the question is, how long are we going to let incidents like this go? Devin Nunez was doing the same kind of crap when he was still in office, got away Scot free.

No consequences. We cannot let this continue. Now, Gaetz obviously is facing a little bit of a different situation here because Democrats do control the House of Representatives, and I call on every single Democrat in the house to call for a formal vote, to strip Matt Gaetz of his seat, to kick him out of the House of Representatives and then haul them away in handcuffs and put him on trial for witness tampering. This guy’s smug attitude, his dancing around the questions and his desire to be famous, not to represent the people down here in Florida, but he wants to be famous. It’s why you see this idiot’s face on TV all the time. He’s out there looking out for him, and he may have just committed the crime necessary to get his stupid face out of our lives for good.