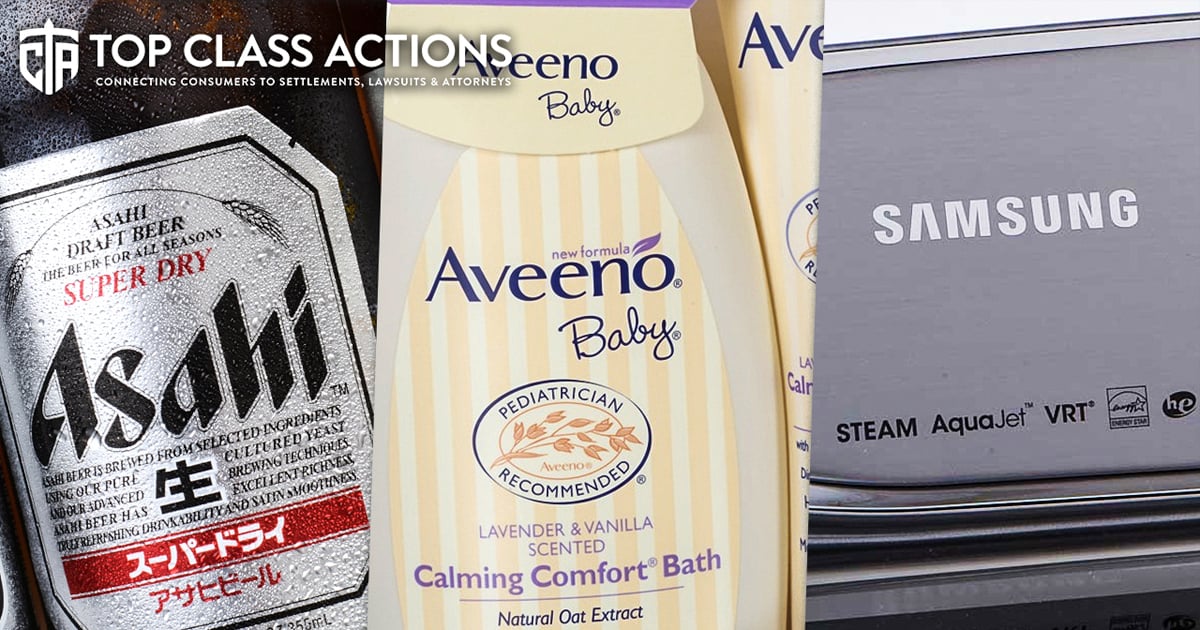 There are numerous products that have been the subject of class action lawsuits, and many consumers don’t even realize that THEY qualify for settlements that are already available. There is plenty of money on the table just waiting for consumers to come and claim it, and Ring of Fire’s Farron Cousins discusses this with Scott Hardy from Top Class Actions.

Farron Cousins:                  Right now, American consumers are leaving a lot of money on the table. Money that they are owed because they may have actually been part of a class action lawsuit or at least qualified for it and not even known about it. Joining me now to talk about some of the biggest class action settlements that have happened recently that could result in cash in your pocket is Scott Hardy from topclassactions.com. Scott, you and I have been speaking a lot over the last few months talking about, you know, some of the up and coming class actions.

One thing we haven’t necessarily done is just kind of tell people what’s already available for them out there. And, you know, we’ve, we’ve got a big list right here of some hugely popular, very common products. You know, people buy these every day and they don’t realize there was a class action on this product or that product that they might qualify for. Give us a rundown. What, what’s happening here? What are some of these products?

Scott Hardy:                          Great. Yeah. This is exactly why I started Top Class Actions was to connect consumers to these types of class action settlements and this cash that otherwise they wouldn’t know about. And like you said, they’d just go ahead and essentially throw out the window because you only have a very set period of time, typically weeks or maybe a couple months to claim and after that it’s over.

So the first one I’d like to start out with is Canada dry ginger ale. And this is an interesting class action settlement in fact, because we know a lot of people will sit there and sip some Canada dry ginger ale if they’re feeling nauseous, they’re thinking, okay, it’s got ginger in it. I’m going to feel a little better if I go ahead and sip this, but what this class action alleged was, is that the ginger is actually just flavoring.

There’s no real ginger in Canada dry ginger ale. And so this is trying to put some money back into the die hard Canada dry ginger ale lovers that there had been buying it or just those that have purchased it in the past. And the average person can get up to $5 and 20 cents per household if you don’t have proof of purchase. Now, if you drink a lot of ginger ale and you love this stuff, you and you have your receipts and that could just be a credit card receipt from a grocery store or a statement from grocery store showing that you shop there.

And you can go ahead and submit your claim for up to $40 per household if you’re a Canada dry ginger ale drinker in most states across the country. So you want to check out if you qualify and if you do, make sure to submit your claim cause this one ends and just a couple of weeks. And next we have another one.

Farron Cousins:                  I did want to add too with that, when you know, Canada dry all over their cans, their bottles, everything in their commercials, they do say, you know, made with real ginger. I mean, that, that is what they proclaim. It is prominent on all of their cans and bottles. So that’s a pretty big deal that they were just making up that claim. And so that’s, you know, that’s a good thing for consumers to know about. Sorry to interrupt you there. I just wanted to add that because that is a huge part of who Canada dry is, that real ginger label and it’s completely untrue. So, again, sorry. So, what else do we have on the list here?

When in fact, Asahi beer is more of a hockey beer because it’s brewed in Canada. And so with this class action, you’ve got viewers that once again can claim up to $10 if they’ve been drinking Asahi beer. They could go ahead and submit their claims. If they have receipts, they can get more money. But again, Asahi beer, you would think that it’s actually brewed in Japan, shipped over. Nope, it’s Canada. So I guess that makes it okay to drink if you’re watching hockey, which is a good thing.

Farron Cousins:                  I think it’s interesting that we have so many of these products. You know, they, they say one thing, you know, oh, we’re, we’re trying to market this as some, you know, some kind of a exquisite foreign product. But really, you know, it’s here in the United States, it’s in Canada, it’s, it’s essentially, it’s a local thing, but everybody wants to cash in on the craze of, ooh, this is a foreign product, so therefore it must be better. So I’m going to pay a higher price because I don’t want to necessarily maybe go have a bud light. I would rather have the fancy foreign beer.

Scott Hardy:                          Right. You know, maybe instead of getting a little Pabts you’re going to get an Asahi now. I don’t know, but it’s, it’s an, it’s an option and it is tasty beer at that. I used to drink it all the time when I was going to, you know, the tap and table restaurants, there’s fantastic. Going to the next class action. This is something, this is involving Vizio smart TVs and you and I have talked about these things a lot. This is a privacy class action settlement. The original class action lawsuit alleges that consumers who bought the Vizio smart TVs didn’t know that their viewing habits were being shared with marketers to better target advertising to, towards these individual owners of smart TVs.

And so this is a $17 million class action settlement that almost anybody who owned or purchased a Vizio smart TV, we’ll be able to get some money back from you. You’ll want to make sure that you submit your, your settlement. This is actually 20 individual class actions that were combined all into one settlement, which is why you’ve got that big pot of $17 million to divvy out. But if you did have a Vizio, a Vizio smart TV, you weren’t aware that your usage habits could have been sold or given to different marketers. Don’t miss out. This one could be significant to the average person.

Scott Hardy:                          Right. So you’ve got Aveeno baby calming comfort bath and Aveeno baby wash and shampoo. And the labels in of itself, you and I talk about this stuff all the time, you know, just selling it that way is fine. But they were deceptively marked as natural. And on top of that, they were, they were marketed as having a hundred percent naturally sourced ingredients and they were made with a natural oat formula.

So we have used this, we have tried it in the past. So that’s definitely one that I’ve got to keep on my list because I know for a fact we have had that in my home for the kids. Final one today we can get to is the Samsung top load washing machine defect. This is a big one. This is a very expensive appliance. You know, Samsung washer dryers are not cheap by any stretch of the imagination. And this was a big settlement too. This, this could potentially give consumers a couple hundred dollars back in their pockets here.

They were actually recalled. So they acknowledged that it was a problem, but the lids were popping off. The pump within the washing machine itself was also falling off and causing problems and leaks. So this covers more than 30 different models of Samsung washing machines. And a, you know, as you said, this is a big dollar once. So you might be able to get the full purchase price of your washing machine refunded in addition to another $400 back, which, you know, gosh, that’s, that is not pocket change by any means.

Farron Cousins:                  And, you know, I, I’ve said this often, I just actually sent it about the Aveeno thing as well. I also happen to have a Samsung top load washing machine. And, and you and I been doing this for months now, and I’ve said this so many times, and I’m going to keep saying it because it’s, it’s just kind of crazy. The number of things that I know I have in my house, the things I purchase, you know, even my car that we’ve talked about in the past, these apply to me.

And so I’m sure a lot of people watching this video and hopefully you’re sitting out there saying, oh my gosh, I use that product. I, I do this, I have this, I’ve done that. So if you have, please, the links to every one of these settlements are available in the description of this video. If you’d rather go the other route, just go straight to topclassactions.com it’s got these stories and countless others. There is money on the table waiting for you. Ladies and gentlemen, go and claim it. Scott Hardy, topclassactions.com. Thank you very much for talking with me.