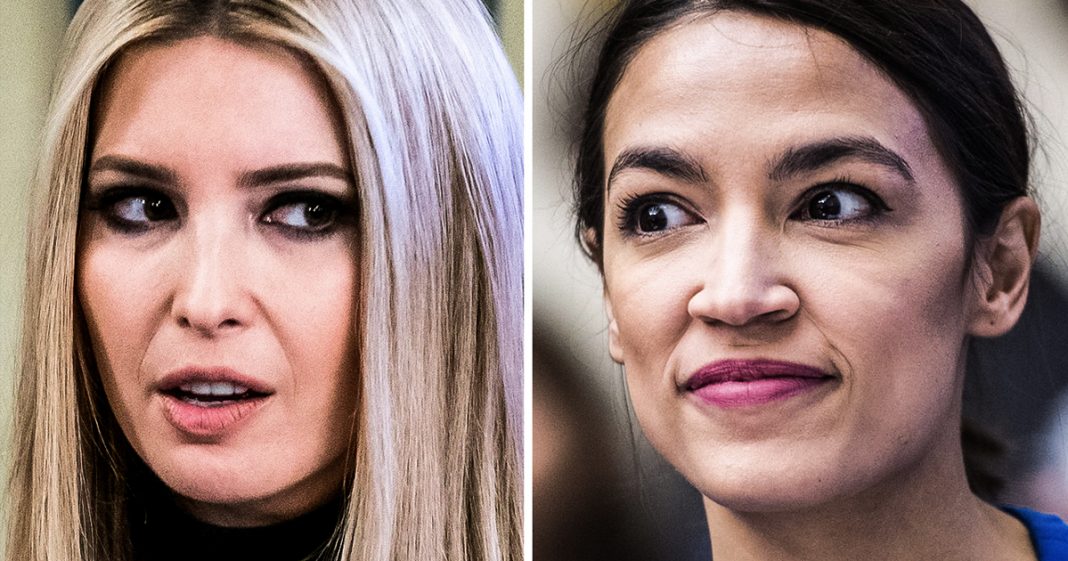 In a bizarre interview clip from Fox News, Ivanka Trump took a shot at both Alexandria Ocasio-Cortez and the Green New Deal that she is leading the way on by saying that Americans don’t want any kind of “guarantee” for free stuff, including jobs. Not only does the statement not make any sense at all, but it shows how badly everyone misjudged Ivanka just two years ago when they thought that she could help move the President on issues like climate change. Ring of Fire’s Farron Cousins discusses this.

You know, sometimes I think it’s a little unfair, you know, Donald Trump Jr. and Eric Trump, they both get attacked, you know, by late night comedian and talk show host and Saturday night live is being the two dumb Trump children. And I think that’s a little bit unfair because I think Ivanka really needs to be included in that group too because earlier this week she proved just how dumb she can be, which she was doing an interview with Fox News, surprise, surprise, and uh, told us why she opposes the green new deal and why she just isn’t such a fan of Alexandria Ocasio-Cortez. Here is what Ivanka Trump had to say about AOC and the green new deal. You’ve got people who will see that offer from the Democrats, from the Progressive Democrats, Alexandria Ocasio-Cortez. Here’s the green new deal. Here’s the guarantee of a job and think, yeah, that’s what I want.

It’s that simple. What do you say to those people? I don’t think most Americans in their heart want to be given something. I’ve spent a lot of time traveling around the country over the last four years. People want to work for what they get. So I am assuming immediately after you finished that interview, you went and gave daddy back all of the money that you’ve taken from him over the years, pretty much since the day you were born. Because you would be nothing in the United States if it weren’t for your last name, which I’m assuming is also why you’re not named Ivanka Kushner. Instead choosing to keep the name Ivanka Trump because that name alone makes you a shit ton of money without ever happen. Uh, having to do anything. You are the epitome. You know the dictionary definition of an inheritance baby, somebody who’s never had to work for anything.

And then you have the audacity to attack one of the grandest plans to ever come out of Washington DC, at least in the last 30 years because people don’t want guaranteed minimums. That’s the word she guaranteed minimums. What does that even mean? I guess maybe she’s attempting to refer to the fact that the green new deal is also basically going to create millions of jobs and we could give out millions of jobs to people, but people don’t want that. They want to earn what they get, but I, none of this makes sense. Right. None of it makes any sense because Ivanka Trump is not an intelligent individual. She is not even a successful individual. She is basically successful in the genetic lottery given the fact that she is a billionaire father who unfortunately is asset rich, but cash poor as they would describe it. And the only reason she has ever done anything in her life that he could even be considered successful is because of her last name. If she was Ivanka, anything other than Trump, she would have to actually go out there and work for a living. And yet she has the audacity to sit there and tell us that because she traveled the country for four short years, she knows best what American workers actually want.