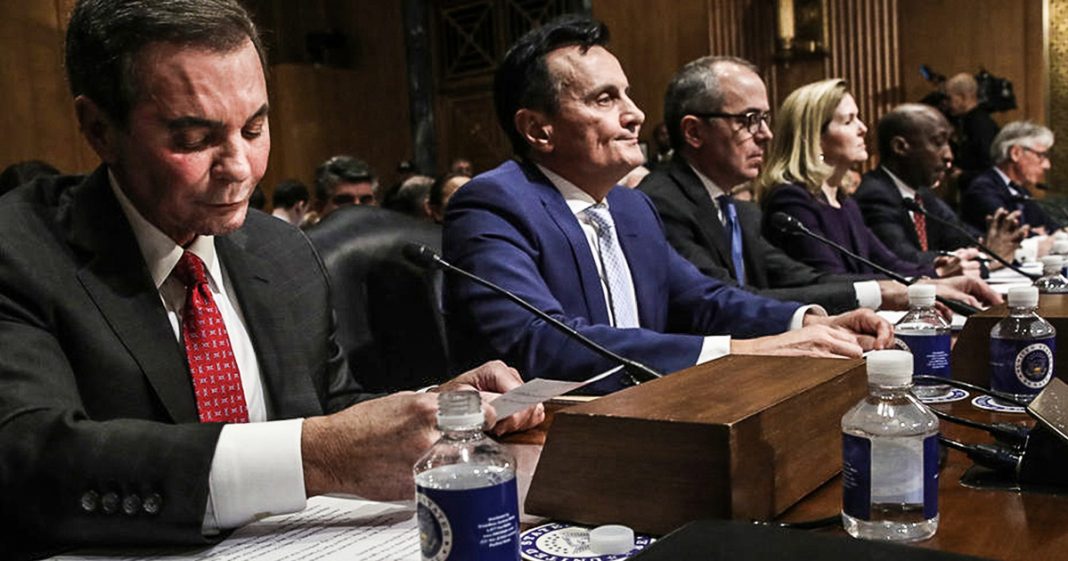 Some of the top executives from the biggest drug companies in America appeared before the Senate this week to defend the disgusting prices that they are charging American consumers. And it didn’t take long for the Democrats at the hearing to let the drug executives have it, telling them that their pricing schemes are “morally repugnant.” The big question now is will these Democrats be able to do anything about it? Ring of Fire’s Farron Cousins discusses this.

This week, the u s Senate hold in a bunch of CEOs and top executives from some of the biggest drug companies here in the United States because they wanted answers about why we here in the United States are paying these astronomical markup prices for prescription drugs compared to literally everywhere else in the rest of the world. And the drug makers gave us the same tired and false responses saying, oh well you were saving lives and, and the r and d is so expensive and we get high profits because that lets us make more drugs and save more lives. We’re good people. We’re good people. They’re telling us and we got to go out there and save lives because you guys aren’t. Who else is going to do it? We’ve got to do this. Yeah. As expected. Literally no one in that hearing on the Senate side, which having it, but the Democrats were far more outspoken than the Republicans were.

The Democrats were pissed off and rightfully so, because they understand that a majority of people in this country are struggling to pay their bills. Majority of people in this country are very angry about the high cost of prescription drugs. And Ron Wyden, a Democrat and finance committee’s top Democrats said the following, he said, drug makers behave as if patients and taxpayers are unlocked. ATM is full of cash to be extracted, and their shareholders are the customers they value above all else. And Wyden is 100% correct in his analysis there you see, as AOC actually pointed out recently, taxpayers are funding the majority of big Pharma’s research and development. That’s us. We’re already paying for those drugs to be developed. So for these drug makers from the companies have a Abbvie, Astrazeneca, Sanofi, Pfizer, Merck, Johnson and Johnson and Bristol Myers Squibb, all executives were there. They’re telling us that, oh, we charge so much because of R&D. That’s a lie. We, the US taxpayers have already paid for your research and development, at least 75% of it. And yet you’re charging us for some drugs over 200000% markups. So you’re literally making us pay for your drugs twice and you get to keep all the profits. We don’t get any of the socialized profits, even though we paid for the research. And perhaps that’s one proposal that we need to start making. We need to socialize drug industry profits. You want to charge $60,000 a year for a drug like Humara, which is one single drug from Abbvie, made $20 billion globally last year alone. Just on that one drug costs a u s citizen, $60,000 a year for a full supply of it. You want to charge that? Go ahead. But we’re going to keep 50,000 of those profits and we’re going to put that towards Medicare for all. We’re already paying for the R. And d. We own these drugs, or at least we should, and I think that is the route we need to go. If we can’t get these jerks to lower the prices, we’ll just start confiscating the profits because we are the ones who paid for the R&D.