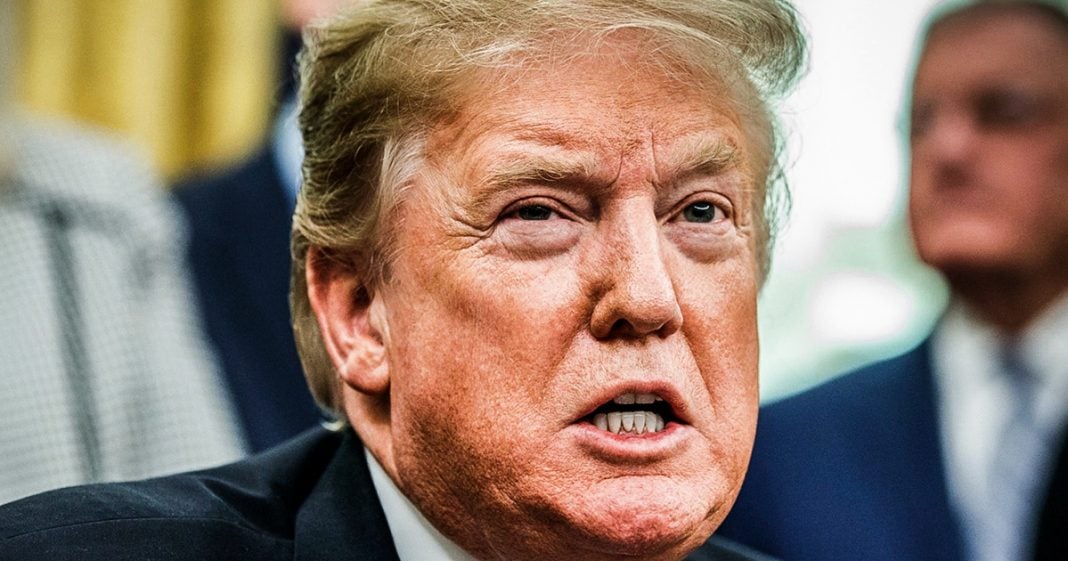 According to a new report by Citizens for Responsibility and Ethics in Washington (CREW), evidence suggests that Donald Trump committed no fewer than seven different campaign finance and other financial crimes while running for President and during his first year in office. These crimes are serious offenses, even if Republicans don’t treat them as such. Ring of Fire’s Farron Cousins discusses this.

The center for responsibility and ethics in Washington has released a new report that lays out the case that Donald Trump may have committed as many as eight different a campaign finance and related crimes in both his run for president and the first year of his presidency they lay out the crimes as follows, uh, causing America Media Inc which is the group that, uh, publishes National Inquirer, uh, to make an or except or causing his then lawyer Michael Cohen to accept and unlawful corporate contribution related to Karen McDougal. Two instances of causing Cohen to make and or accept an unlawful individual contribution related to Stephanie Clifford and February, 2015 online polling, two instances of causing Donald J. Trump for President LLC, failure to report contributions from Ami and Cohen related to McDougall and Clifford, uh, making a false statement by failing to disclose liability to Cohen for the Clifford payment on his 2017 public financial disclosure form and conspiracy to defraud the United States by undermining the lawful function of the FEC and or violating federal campaign finance law related to hush money payments, false statements and cover ups of reimbursement payments to Cohen made by the Trump organization.

[01:22] Uh, so basically crew looked at all of these non mauler related crimes and said, you know what, there really is enough here to nail this guy. And they’re absolutely right. I mean, these are actual crimes. I know Republicans like to tell us that no, these aren’t bad. These aren’t crimes. This isn’t criminal activity that in any way is going to hurt the president. And to be honest, they’re partly right too because the public should be angry about this. The public should be paying attention to this and yet they’re not. And unfortunately that goes for a lot of people on the left as well. A lot of people on the left are sitting here waiting for the Mauler report, hoping that that’s going to give us enough information to impeach Donald Trump and remove him from office. But in reality, the the evidence that we need to do that would be available right now.

We’re not going to get Republicans to go along with it, just like we’re not going to get Republicans to go along with anything that comes out of the Mueller report. But we do have the evidence. We know that this man engaged in criminal activity. Now, whether he knew it or not is the big question mark and that’s why this is all alleged criminal activity. Because unfortunately the way some of these campaign finance laws are written, the president would have to knowingly and willfully break the law, not accidentally break the law seems unfair. It seems kind of silly because if you break the law, you break the law whether you knew or not. But because of the way some of these laws are written, this guy will likely get off the hook by just claiming simple ignorance unless we can prove he knew it was illegal to do so.

But here’s the thing, we have seen plenty of other people in this country go to prison for similar actions. Unfortunately, all of them have been democrats. We’ve seen democratic donors go to jail for allegedly violating campaign finance laws. We have seen a former Alabama governor and also Democrat Don Siegelman go to jail for an alleged kickback scheme, which is now just considered every day campaign donations. Nothing illegal about it, but he was targeted by Karl Rove. So yeah, why shouldn’t Donald Trump go to jail for actual real crimes that he committed when Democrats for the past decade had been put behind bars for far less and most of those things wouldn’t even be considered criminal today under citizens United. But there is no question about what Donald Trump did and that is why crew was issuing this report. People need to understand that this man did break the law and he directed his subordinates to break the law. At least we think he did. Again, that’s a piece of the puzzle that still has yet to be put together, but all signs point to the fact that Trump knew what he was doing and he made his subordinates do the same.