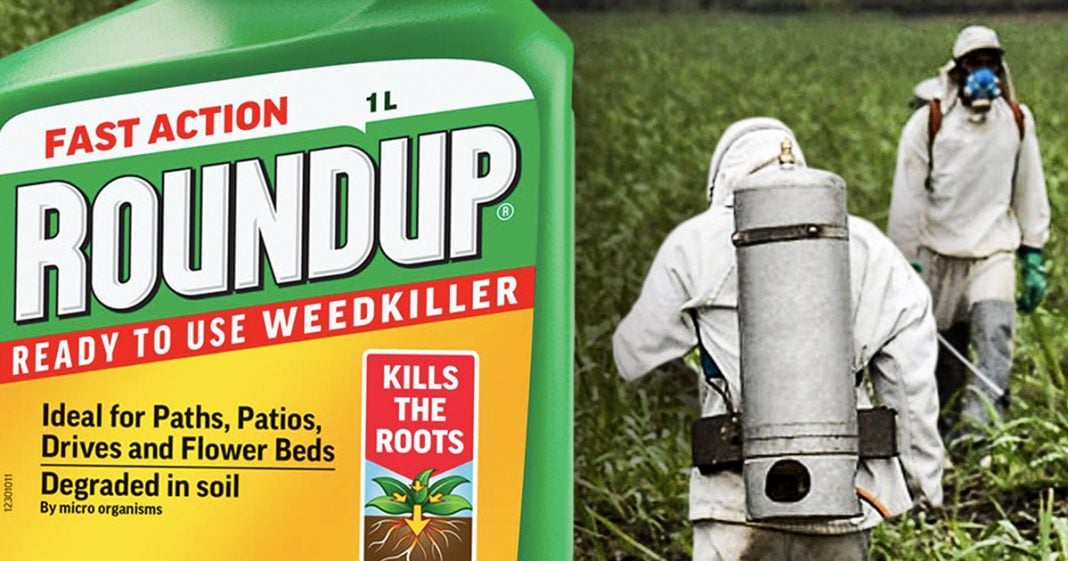 The judge currently presiding over one of the bellwether Monsanto Roundup trials is doing everything possible to hinder the plaintiffs. This week, the judge said that the lawyers for the plaintiff are no longer allowed to talk about Monsanto’s conduct as a corporation, including the years of coverups and the front groups that they have been funding to mislead the public about the dangers of Roundup and glyphosate. Ring of Fire’s Farron Cousins explains what’s happening.

The very first federal trial against Monsanto over the dangers of their weed killer Roundup and glyphosate. The active ingredient in Roundup, um, are underway right now. And yesterday in this very first federal trial, the judge told the plaintiff’s lawyers, you can’t talk about how bad Monsanto’s conduct has been. You cannot talk about the fact that Monsanto for decades tried to cover up the dangers of their product.

The plaintiffs have essentially because of what this judge has told them, essentially putting a gag order on them. They have been told, you can’t make your case.

That is how badly the hands of these plaintiffs lawyers are being tied by this federal judge in order to aid Monsanto. Let me explain something for people who’ve never been to trial, who, who aren’t really familiar with how this works. Whenever you have a bad product and you go to trial representing the people injured by this bad product, the very first thing you have to do is show that the company knew about it and then you have to show that they covered it up.

This judge and Monsanto for glyphosate just said, you can’t do that. You can’t show that they knew about it. You can’t show that they covered it up, so what the hell is the point of the trial? If you can’t argue that this company knew about it and covered it up, then why are we wasting our time even going to trial? Let’s just let Monsanto off the hook. Let’s let millions of people get poisoned by glyphosate and then move on as if nothing happened. I’m sure that’s what Monsanto wants, and based on this ruling, I have to assume that this might be what the judge wants here. Now, I don’t know too much about the judge in this particular case, Vince, a Jabrea, if I pronounced that correctly, I do not know Vince’s history. I do not know if if, if he’s more of a corporate guy or if he’s more of a pro consumer guy, but I do know that this is a bad decision. It’s a bad decision because here’s what we, the public know and this is readily available on the Internet right now. We know that for years, Monsanto has been funding a group called the glyphosate task force, glyphosate task force. Their job has been to go out there and mislead the public to tell them that glyphosate used in Roundup will not give you cancer day of paid scientists. They actually have a list serve of lists of scientists that are willing to go out there and write these phony reports or put their names on these phony reports put out by glyphosate task force and Monsanto. We know that. We know that that is something can search for right now and find it on the Internet. Everybody in this country has access to it. I’m not telling you anything that you couldn’t go and find yourself.

And now this judge is telling these plaintiffs lawyers, you can’t say this in court. You can’t tell this to the jury. You can’t go through all the years and years and years of, you know, scientists that Monsanto funded to show that you know, this thing is safe even though it’s not.

So what’s next? Are we not going to be able to get Monsanto’s internal documents and see what they were saying to each other are, are, are we not going to be able to run toxicology studies? I, this is a very, very bad move and it only helps Monsanto. And again, the reason I pointed out at the beginning of this, that this is the first federal trial, is because there are hundreds or thousands even of lawsuits pending right now against Monsanto over the dangers of glyphosate. And if they’re pampered or hindered in any way at the federal level, then these cases have a 0% chance of being successful even in the hands of the gifted trial lawyers who are currently handling this case, the, the lawyers working on this right now, a lead, one of them, uh, by Amy Wagstaff, who was a phenomenal attorney, even as good as she is, if this judge continues to curtail what they’re able to say in court, then Monsanto is 100% going to win this. And this is going to be bad for everybody in this country because if Monsanto prevails, then that means this dangerous toxic chemical, glyphosate and Roundup is not going away. It’s not going to have additional warnings, which means more and more people are going to get sick and die because of the way the plaintiff’s lawyers have been muzzled in this particular case.