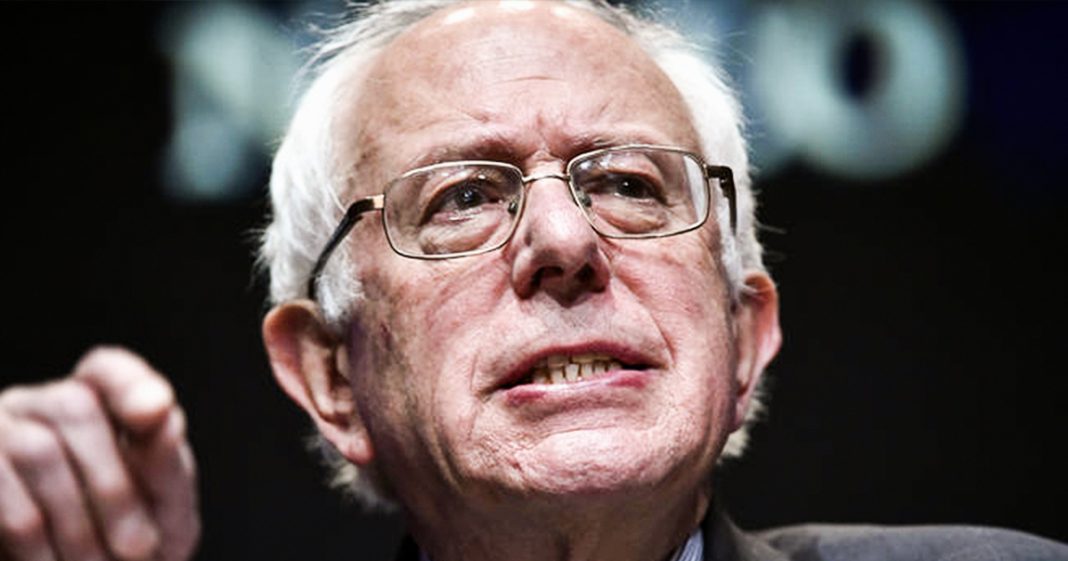 Politico found the most irate and angry former Clinton staffers that they could locate and had the unnamed individuals trash Bernie Sanders in a disgusting hit piece. The lengthy articles talks about the so-called hypocrisy of Sanders using a private jet to go and campaign for Hillary Clinton during the 2016 presidential election, where he traveled throughout the states that Clinton refused to visit. The piece is disgusting, and it shows how bitter and whiny some of these former staffers really are. Ring of Fire’s Farron Cousins discusses this.

Let’s talk about that politico hit piece that came out yesterday against Bernie Sanders. Politico spoke to several former Hillary Clinton in 2016 campaign staffers and just let those people have their way with Bernie Sanders and tell us what a horrible piece of crap he truly is. And in fact, what they’re actually mad about is the fact that Bernie Sanders, the guy who thinks we need to protect the environment, flew in a private jet. He flew in a private jet while he was campaigning for Hillary Clinton. And that’s pissed off. These former staffers, man, what a hypocrite. Why was any out there driving his car to 11 different states in seven days? Why didn’t you dry? Why didn’t he walk? You know, we had volunteers out there with freezing hands, knocking on doors is literally what they said. Freezing hands, knocking on doors, freezing hands. Mind you in a October doesn’t really add up, but sure, whatever, go ahead and spread your nonsense lies.

But it’s this quote, this quote from the director of rapid response for the Clinton campaign, man by the name of Zack Pet Qantas. It’s this quote that absolutely sent me over the edge. Here it is. I’m not shocked that while thousands of volunteers brave the heat and cold to knock on doors until their fingers bled in a desperate effort to stop Donald Trump, that his royal majesty, King Bernie Sanders would only Dane to leave his plush DC office or his brand new second home on the lake if he was flown around on a cushy private jet like a billionaire master of the universe. That is a direct quote from Zack pet conis who was the director of rapid response for the Clinton campaign. The only thing I have to say is screw this guy. You do understand that what Bernie Sanders was doing at the time was flying around and visiting the states that your candidate, your boss refused to step foot in and you’ve got the audacity to be pissed off at him.

According to reports, the Clinton campaign paid roughly $100,000 for these private jet flights that Bernie Sanders took, and occasionally he still takes them when he has to get to events. Hundred thousand dollars from the Clinton campaign. A campaign that raised billions of dollars and they’re pissed off about a hundred thousand they’re pissed off that he also went out and brave the heat and the cold to stand up on stages and tell people after, you know, he lost the primaries to go vote for my opponent. Now I’m 100% in her corner. He, we’re, we’re running the numbers here. Sanders held 39 rallies in 13 states on behalf of Clinton’s campaign. That was in the final three months, 17 events in 11 different states in the last week of the campaign alone. 17 events, 11 states in seven days. Now, are you going to find commercial flights and get to the airport two hours early and sit there?

You’ll take your shoes off, send them through the Ben, have to wait for your flight. You know, maybe it’s delayed. Maybe it’s not. Hopefully you’re on time. Hopefully you’re not going to have to be rerouted because of bad weather. Or do you take a private jet like literally every other politician would do. I get it. You want to echo the republican talking points of how dare liberals get mad about climate when they fly in planes and drive cars. You, you want to add, go that Mr pet [inaudible] and the other six unnamed Clinton staffers that spoke to politico for this nonsensical hit piece, but this is downright disgusting. You guys are bitter. You’re pissed off, but you need to understand that Hillary Clinton wouldn’t have even won the popular vote had Bernie not gone out there and traveled to the places that she felt were beneath her, because that is what happened. That’s why she didn’t go there. There was no money to be made there, so she didn’t bother going. Bernie did show, if you want to be pissed off at somebody, if you want to run, hit pieces on somebody, you need to look at the person that was signing your paychecks and understand that they and they alone were the reason she’s not sitting in the White House.